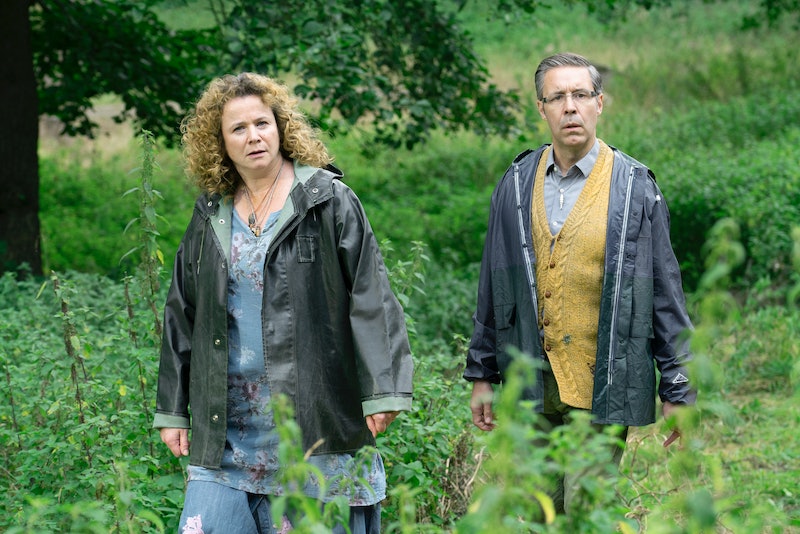 It turns out that HBO's The Third Day was, in fact, filmed on the real Osea island — and the experience was just as spooky as you'd think. "I think it's a little bit creepy myself," actor Emily Watson told Essex Live. "On a clear day with a sunny sky, it's beautiful. There's amazing birdlife. But it's got all these creepy hedge tunnels and it's just got a sense that stuff has happened there; it was a rehab place for a while."

Osea's eerie history made it the perfect fit for The Third Day, which includes a lot of bizarre and bloody imagery. Not only was the island previously used as a rehabilitation center (where Amy Winehouse went for a time), it was founded by a man named Frederick Nicholas Charrington, who some believe was Jack the Ripper.

"Initially, we didn't know where we were gonna set [the show]," series co-creator Dennis Kelly told Collider. "We were talking about setting it in a little town but there's no town in England that feels as cut off as we needed." That's when his co-creator Felix Barrett came across Osea. "It was just really clear that it was a perfect place because there’s something strange about the island," Kelly added. "You cross that causeway and even though you're in Essex, you don’t feel like you are. You feel like you’re in another separate world."

The winding causeway that's often underwater, cutting off access to the main land, is also real — which often forced the cast and crew to stay overnight on Osea until the road was open again. "Exactly as in the story, if you missed the tidal causeway, you then had to wait to get a boat," Watson told Essex Live. "There were only certain times of day when you could get on and off the island."

In addition to Osea, The Third Day also filmed at several locations in Kent, including Hever Castle, Bedgebury National Pinetum Forest, and Walpole Bay Tidal Pool, according to the Kent Film Office. Parts of Jude Law's scenes were also taped on a different island — the Isle of Sheppey off the coast of Kent, which According to producer Adrian Sturges suggested because he grew up in the area, per Kent Online. "We needed something really distinctive and eerie," he said. And that they found.