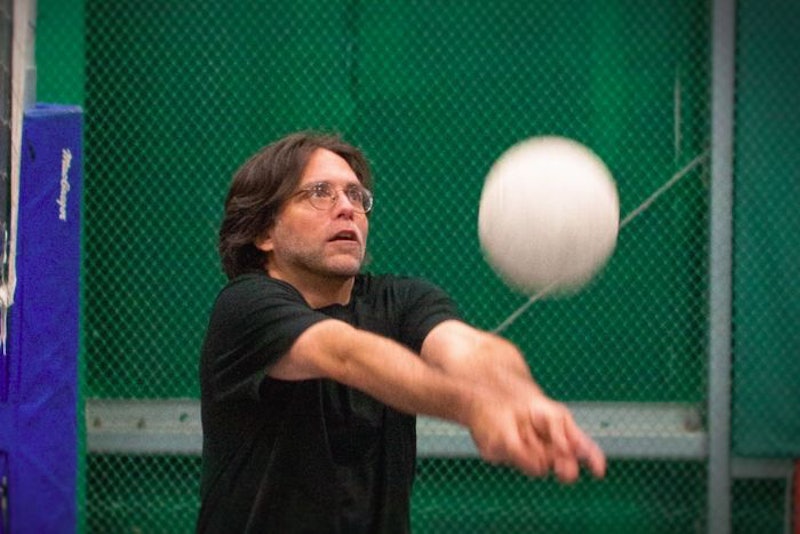 NXIVM leader Keith Raniere's presence has loomed over The Vow since its premiere: in archival footage, in recorded phone calls, in the shared trauma of the group's former members interviewed for the docuseries. But in the show's Season 1 finale, viewers finally hear from Raniere directly. Calling from inside the Brooklyn detention center where he's awaiting sentencing after being convicted on charges including sex trafficking and forced labor conspiracy last year, he tells filmmakers that The Vow is only the "very top layer" of the story. "Depending on what you're willing to present as the truth, it can go very deep," he says ominously. "So talk to me."

The invitation is a clear lead-in for The Vow Season 2, as is the obscured image of a woman who appears to be NXIVM co-founder Nancy Salzman sitting on a couch with an ankle monitor, apparently ready to share her side of things. (Salzman, who is also awaiting sentencing after pleading guilty to charges including racketeering and identity theft, has been on house arrest on a $5 million bond since 2018.)

Announced mere days before the Season 1 finale, The Vow Part 2 will delve into the "legal and emotional journeys" of Raniere's innermost circle. Below, Vow filmmakers Jehane Noujaim and Karim Amer weigh in on what that means for the story, if that was indeed Nancy Salzman in the episode, and the eternal mystery of why NXIVM members played so much late-night volleyball.

Congratulations on Season 2. Were you always planning to continue the story and follow the NXIVM trials?

Amer: It was never a one-part story, it was always two parts.

Noujaim: [The first part was] very much in the world of these people who had left [NXIVM] and were questioning everything that they had been a part of. And then we thought, after the arrests happen, it becomes this global story that takes place on a world stage where there are lawyers and the justice system that comes into it. So the next part is understanding things from the legal side of things, the legal and emotional journeys that our characters are about to go on, [and] the other characters that come into the story [are] people who have very different perspectives. You could look at it like a jigsaw puzzle, where each person that comes into it brings a different piece of a puzzle. You can't understand this story unless you see it from multiple perspectives.

The Season 1 finale ends with a call from Keith. How did you get in contact with him and what was that conversation like?

Amer: When you go through these kinds of stories, you have to try and leave no stone unturned. During the trial we began filming from the perspective of Keith’s lawyer, Marc Agnifilo and his team, and through that process there was a conversation that was facilitated to Keith.

Amer: [laughing] What are you talking about?

Amer: That’s my Aunt Mona. That clip was a mistake, I don’t know what you’re talking about.

Well, the woman who is definitely not Nancy Salzman. Will this mysterious person share their side of things in Part 2?

Amer: We are not able to confirm or deny at this time who will or won’t be in it, but if you check in in a few months, we will be able to tell you.

Noujaim: This is a very deeply emotional story and it involves a trial, so there are legal complications, and people on different sides of legal lines. And everybody that we’ve followed has been supportive of us getting different perspectives.

Were you ever worried about retaliation from NXIVM members? Did you experience any kind of legal threats while you were making the documentary?

Amer: It’s always something that’s in the back of our heads, and its threat level has ebbed and flowed depending on different chapters of the story. We’re also used to legal issues. The day [our 2019 documentary about the Facebook–Cambridge Analytica data scandal] The Great Hack came out, the head of Leave.EU, Arron Banks, tried to sue us, so it comes with the territory with these kinds of stories, unfortunately.

One aspect of NXIVM that a lot of viewers have been fascinated by is the late-night volleyball games. Did anyone ever explain that to you? Why volleyball, and why so late at night?

Amer: The explanation that I got is basically that volleyball is a team sport where you don’t have to be that good to play. You can be on the same team and have someone who’s very good, someone who’s not so good, and still feel like you’re part of the team and there’s a role for everybody.

Noujaim: It was a place where people could meet with Keith in an informal way, and so people often brought others to volleyball when they wanted them to meet Keith. You have to understand, most of the 18,000 people that took the Executive Success Program curriculum never met Keith, so you would never meet him unless you took a class in Albany and you went to volleyball. He was very much edified before you met him.

Noujaim: Well, one second, let me in real time — because this is how it works — let me ask someone a question who I’m actually interviewing right now, and I’m going to ask them again about volleyball, because now we’re getting deep into the lives and understanding of people that really know what’s going on.

Noujaim, a few moments later: So I have the answer for you, from "Aunt Mona." Keith never wanted to interact with anybody from outside of the community, so when they had gatherings with him, they could only rent the gym at times when nobody else was using it. So that’s why they rented the gym during the night, when nobody else would be there.

Amer: This is a huge mystery unlocked, like I literally — there are people who took NXIVM classes for years who probably don’t know the answer.

Noujaim: We’ve never gotten the answer! We’ve asked that question! But now I’m with somebody who knows the answer.

More like this
'Killing Eve' & 'Doctor Who' Stars Just Joined The Cast Of 'True Detective' Season 4
By Brad Witter
A New 'And Just Like That' Table Read Pic Confirms A Key Character's Return
By Jack Irvin and Grace Wehniainen
Where Is Armie Hammer’s Ex-Wife Elizabeth Chambers Now After 'House Of Hammer'?
By Grace Wehniainen and Radhika Menon
Tyra Banks Flubbed The Name Of Charli D’Amelio’s Boyfriend On 'DWTS' Bond Night
By Jake Viswanath
Get Even More From Bustle — Sign Up For The Newsletter