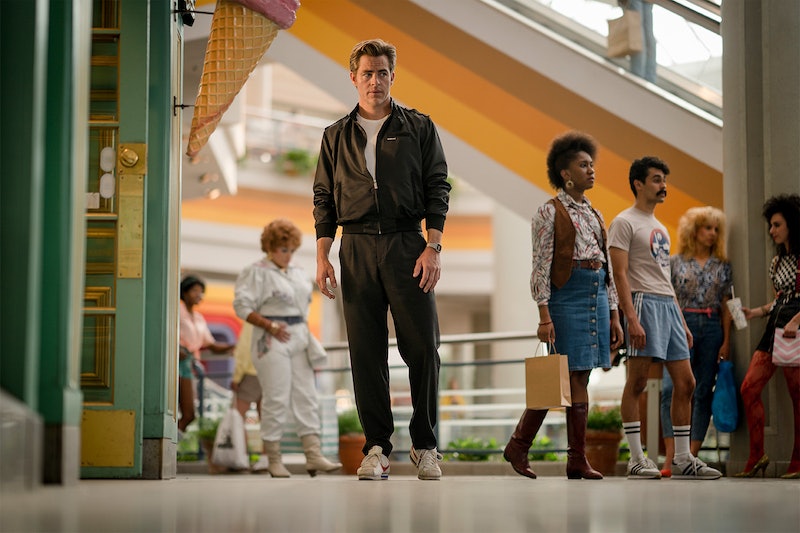 From the moment fans saw that teaser photo of Steve Trevor in Wonder Woman 2, they had a lot of questions and rightfully so. The most pressing of which was, how is Chris Pine's Steve still alive in the Wonder Woman sequel? After all, the first photos from the film, directed by Patty Jenkins, are reportedly from scenes set in 1984, nearly 60 years after his supposed death in the first movie. But, leave it to Twitter to come up with a ton of wild Steve Trevor theories that explain why he's still alive. Some of them actually seem pretty plausible, while others will have you thinking way too much about Steve Trevor's new wardrobe — all are possible.

In June 2019, Jenkins tweeted out a photo of Steve in a very '80s-by-way-of-Top Gun tracksuit with a special message to the character: "Welcome to Wonder Woman 1984, Steve Trevor!" The tweet not only announced the official title of the movie, out December 25, but also showed that this movie is going to be totally '80s.

What is also pretty rad is the return of Steve Trevor, since everyone else, including Wonder Woman herself Diana Prince, thought he was dead after being shot down in Wonder Woman. But, no, somehow he's back and people everywhere are trying to figure out how that's possible. With only one snapshot to go on, fans have had to become real investigators to come up with some of their own theories. And they're definitely worth paying attention to.

According to @rustypolished, Steve is just a "projection of Diana's imagination" and that lewk he's sporting is courtesy of Wonder Woman's mind. It's possible she's still pining for her lost love, and imagining seeing him alive and well. This theory holds up, especially being that she turned down Batman in Justice League because she was still hung up on Steve.

In what could be the most inventive theory yet, @rustypolished came up with another possible explanation for Steve's appearance in Wonder Woman 1984: that he's actually a ghost. According to this theory, the sequel will be a "superhero remake of the classic film Ghost." Honestly, that kind of sounds amazing.

3. He took advantage of Themyscira's many wonders

Twitter user @headgeek666 thinks that Steve "bathed in magic water on Themyscira," which "probably keeps him from aging." This is a reference to the scene from Wonder Woman in which Steve takes a bath in Themyscira, and while that explains why he looks so youthful, the user also came up with a theory as to how he survived that explosion explaining that Steve "dove out of plane" and ended up with amnesia so he doesn't realize how old he is.

4. He's not himself, literally

A theory from Screen Rant proposes that Chris Pine isn't playing the real Steve Trevor — the one audiences met in Wonder Woman —but one of his descendants, possibly his grandson. There is a debate about whether Steve had any kind of family before he died, but Pine believes that Steve did. And there's precedent. As SyFy pointed out, in the Wonder Woman TV show, Linda Carter's Wonder Woman ends up in the future, introducing Steve Trevor's son, Steve, Jr, it's possible Steve's son or grandson could appear in this movie.

While Wonder Woman may be part of the DC universe, Twitter user @NeiliusPrime thinks he might have gotten some help from Marvel. "Does he have the super soldier serum from Marvel or something?" they asked. It's a good question, since that Super-Soldier Serum is exactly what has kept Captain America alive for nearly 90 years.

Mashable also explored the theory that Steve's return might be like that other Steve (Rogers), that he may have been literally frozen and is only coming out of that cold sleep now for this movie.

Another theory is that this Steve Trevor is a clone, and may not be a good one. Looking at Greek mythology, there's a possibility this version of Steve was sent to Earth by Diana's father Zeus to punish her. In Greek mythology, Zeus has been known to use trickery against his enemies. He's taken on other forms and made clones of other beings for his own sick pleasure. But taking on the form of your estranged daughter's love is pretty cold, wouldn't you say?

8. He's come back from the dead

Resurrecting characters from the dead is something movies do all the time. In fact, in the early '80s, a Steve Trevor from an alternate universe was introduced, who eventually merged with the original Steve, who had died, essentially bringing him back from the dead. Basically, it happened before, it could certainly happen again.

The fanny pack could be way more than an '80s fashion choice. According to @alicialues, Steve's fanny pack "contains the secret of how Steve Trevor is still alive." It might sound funny, but could totally be plausible, since there have been several photos from the Wonder Woman 1984 set that show Chris Pine in that fanny pack. Let's agree that if the fanny pack is what's keeping Steve alive, we never want him to take it off.

With Wonder Woman 1984 dropping in the very imminent future, fans are about to find out how exactly a human — albeit a heroic, self-sacrificing one — manages to survive jumping out of an exploding plane in the middle of combat while still looking youthful some 70 years later. ScreenRant covered one of the more recent developments in Steve Trevor's return to life — although be warned, it is a spoiler for the Wonder Woman 1984: The Junior Novel adaptation of WW84.

In that novel, it's explained that Diana stumbles upon a magical artifact called the Dreamstone, which is appropriately named because it is purported to grant wishes to those who come in contact with it. Take this explanation with a grain of salt, however, as oftentimes film novelizations aren't "canon," so to speak, which is to say that they might not line up precisely with the film. In any case, if it is true, then having magical artifacts popping up might open up some interesting possibilities for the DC Extended Universe. But again, audiences don't have to wait long to find out exactly how it is that Steve Trevor ended up in that mall.

More like this
A New 'And Just Like That' Table Read Pic Confirms A Key Character's Return
By Jack Irvin and Grace Wehniainen
24 Years Ago, 'Friends' Dropped Its Most Underrated Ross & Rachel Episode
By Grace Wehniainen
UK Viewers Will Have To Wait For The Terrifying 'Hellraiser' Reboot
By El Hunt
Lindsay Lohan & Jonathan Bennett Celebrated Mean Girls Day Very Differently
By Jake Viswanath
Get Even More From Bustle — Sign Up For The Newsletter

This article was originally published on June 15, 2018