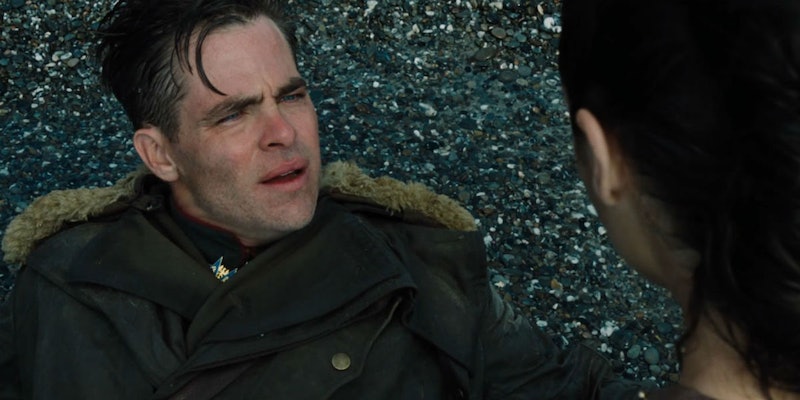 Wonder Woman is the first solo movie for its titular character, which is of course insane since it's 2017, but I'm still glad that it's finally here. But just because the film's hero is a woman, that doesn't mean it's rewriting the tried and true formula of the genre. The movie still has an origin story, a typical heroic arc, and yes, a love interest: Steve Trevor, played by Chris Pine. But is Steve Trevor in the Wonder Woman comics, or was he just invented for the film?

The character may not be as famous as other superhero romantic partners like Lois Lane and Mary Jane Watson, but Steve Trevor still has a long and storied history in the pages of DC Comics. His first appearance was in All-Star Comics #8 in 1941, an issue better known for introducing another character: Wonder Woman. So yes, Steve's history in the comics goes back just as far as Wonder Woman's. He was an intelligence officer for the U.S. Army Air Corps during World War II who crash lands on Wonder Woman's home island, Themyscira (then known as Paradise Island). The island is the home of the Amazons, a race of god-like warrior women, and by landing there Steve became both the first outsider to set foot on the island, as well as the first man Diana (Wonder Woman) had ever seen.

There, Diana cares for him and accompanies him to the outside world in order to fight the Nazis. The film features an almost identical first meeting, with the exception being that the time period has been changed to the first World War.

After traveling to the real world, Diana became Wonder Woman, while also working as Steve's secretary under the alias of Diana Prince. Throughout the '40s, the pair functioned nearly identically to Superman and Lois Lane. Steve didn't pay much attention to Diana Prince, was in love with Wonder Woman, and constantly found himself in need of being rescued by her. But beginning in the late 1940s, their relationship would change. Wonder Woman was rewritten to be less heroic and more submissive to Steve, wanting to marry him above all else and constantly accepting his marriage proposals only to be continually thwarted by outside forces. This dark period in Wonder Woman's history is exemplified pretty well in the below cover, which dates to October, 1949.

Eventually, as is often the case with comic book characters, things got very complicated and convoluted for Steve. In 1968, the character was killed off. He was then resurrected (with brown hair instead of blond) several years later as Steve Howard, who was then killed again in 1978. In the early '80s, a Steve Trevor from an alternate universe was introduced, who eventually became merged with the original, deceased Steve, making him essentially the same person. And in 1986, Steve and Diana got married after 45 years of "will they or won't they" courtship.

This didn't last, however, as a DC-wide reboot saw a new Steve Trevor emerge the next year. This Steve was significantly older than Wonder Woman and not a romantic interest, as he instead eventually marry Etta Candy, Wonder Woman's best friend. This century has seen several more series-side reboots of DC Comics that have rewritten history multiple times, yet none of these ret-cons have resurrected the decades-old romance of Steve Trevor and Wonder Woman.

With Steve Trevor once again featuring as Wonder Woman's love interest in Wonder Woman, it's possible the comics could follow suit and see him take on that role again for the first time in 30 years. Or maybe not, because if there's one thing Wonder Woman has proven over the course of her career, it's that she doesn't need a man.