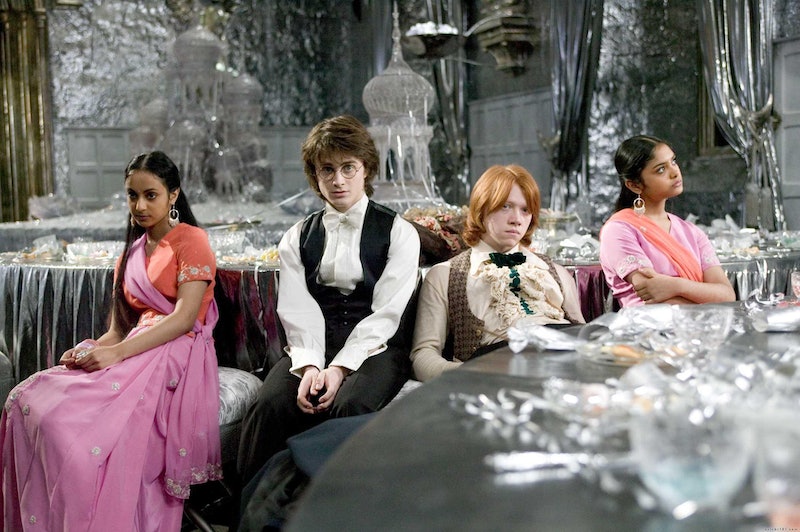 The Harry Potter franchise turns 20 this year, and in tribute the cast is reuniting in an HBO Max special. As rewatching the series is central to getting through the post-Christmas, I thought I’d revisit the fourth film. Harry Potter and the Goblet of Fire is notable for being a turning point in the series, with its general themes becoming much darker and more ominous than the previous four films. Directed by Mike Newell, the movie also features Robert Pattinson, who later became renowned for his role as Edward Cullen in Twilight, and everyone’s favourite (read: my favourite) Doctor Who, David Tennant.

Whereas the first two movie adaptations were deemed excessively faithful to the books, Harry Potter and the Goblet of Fire has been subject to much discussion over the years as it deviated from the course of books with scenes that are much longer than they need to be for no apparent reason (see the first part of the Triwizard Tournament) and questionable characterisation of deeply-loved characters (see also: “Dumbledore asked calmly”).

Yet, despite the deviations, it’s the small moments of joy that sell the movie: the dancing lesson with Professor McGonagall (one instance I wish actually was in the book), Ginny being afforded more of a personality than she ever will have, Professor Snape hitting the boys over the heads with a book for talking during a study period (which would probably be illegal in the Muggle world), and a comical adaptation of Draco Malfoy being turned into a ferret. Here are my thoughts on the film.

By this point, we’ve established that the Harry Potter series probably isn’t for children anymore. This isn't just hinted at by the depleting colour of the Warner Bros logo; the sharpest reminder comes from the film beginning with Voldemort’s murderous pet snake Nagini emerging from a skull wall and slithering past a statue reminiscent of the Grim Reaper — and that’s even before we encounter the Death Eaters charging around the Quidditch World Cup and burning the tents down. Things are changing.

The hair of the trio, particularly Ron and Harry, begins to embark on a journey of its own in this movie, and it does feel like they were determined to be as unkind as possible to the boys. Ron’s hair looks like it belongs in the ‘70s, while the twins’ hair looks dated.

Even the Wizarding World isn’t exempt from the tabloid press

The movie ultimately thrives off scenes that centre on universal, relatable truths that resonate, like squabbling teenagers and… the malignance of tabloid journalism. In the form of Rita Skeeter and her Quick-Quotes Quill, we catch a glimpse into the tabloid press and its relentless thirst for gossip. Rita inexplicably modifies and exaggerates the words of the subject, and oh, she’s also horrendous at fact-checking, repeatedly getting Harry’s age wrong.

The most enduring problem within this film for people who have read the books is the mischaracterisation. It goes without saying that the book’s version of the scene in which “Dumbledore asked calmly” couldn’t be more different from the movie’s depiction in which Dumbledore runs towards Harry, grabbing him by the shoulders and demanding answers as to whether he put his name in the Goblet of Fire. It’s a focal point of controversy and has spawned many gifs and memes.

There’s an almost comically large disjunction between the book portrayal and film depiction of Dumbledore, with the character himself being altered in this film: the calmness he was known for has merged into anger, and he defers to others’ judgement constantly out of indecisive weakness. To put it bluntly, book Dumbledore would never push one of his students up against a table and shake them while pursuing answers.

There really isn’t any diversity

I’ve tried, I’ve looked, I’ve scanned the room. But I can count the number of people of colour in this film on one hand, including Cho Chang, whose name itself is shrouded by stereotypes. Which brings me on to…

Who dressed Padma and Parvati for the Yule Ball?

Lazy, one-dimensional stereotyping is a common thread in the series as a whole, but this film, in particular, exemplifies it. It’s not only the atrocious neon pink and orange combo — any Indian can see that their “lehengas” were nothing like what Indians actually wear and that the scarf (dupatta) is arranged in the wrong place — but it’s a rather puzzling directorial choice to have their clothes differ from the shocking pink and bright turquoise robes they were described as wearing in the books.

One can assume it’s because production didn’t want to shift the focus from Hermione and the ‘girl makes grand entrance cliché’, but the Patil twins truly did deserve better than awful outfits and sulking dates who wanted to be there with other people.

Why do they arrive at the Yule Ball by carriage? If Hogwarts is the destination, where did the carriages even come from??

It all, somewhat relatably, ends in tears

Hermione crumples on the stairs while the others enjoy their last dance, and strangely enough, there’s a girl right behind her on the stairs, who’s presumably in the exact same situation and being comforted by two friends.

Robert Pattinson is in this film — and he deserved more airtime

Before Pattinson became widely known as Edward Cullen in Twilight, he appeared as Hufflepuff heartthrob Cedric Diggory in this movie. In all honesty, it’s probably one of the movie’s highlights.

The scene with Harry and Moaning Myrtle in the bath is just awkward and inappropriate, given he was meant to be 14 years old. Just a tad disquieting. Oh, and why does it genuinely feel like, aside from Moaning Myrtle (a literal ghost) and Harry, no other student in the film wears glasses?

It's very difficult to like Ron in this movie

We know tensions are high, and this is ultimately a film revolving around the lives of three teenagers, but still, it’s possible to be empathetic and not come across as a moody teenager at all times. His reaction to Harry being chosen for competition is marked by jealousy, and his anger is unnecessary.

He’s also typically emotionally immature and tactless: he only has himself to blame for not asking Hermione to the Yule Ball on time (or even properly), but instead takes it out on Hermione (who is almost as angry as Dumbledore throughout the movie) and Padma — who haven’t done anything wrong. It’s possible to view the changes in Ron’s character as the products of growing up itself, but something about his character itself feels off.

Where does everybody... go?

Harry Potter and the Goblet of Fire was a very complex book, with many subplots underpinning the conclusion, but there’s so much that’s rendered entirely inexplicable in the movie. Rita Skeeter just vanishes; Barty Crouch Snr dies in a random scene and it’s never mentioned again.

The return of Lord Voldemort

Lord Voldemort’s rebirth — and his subsequent actions — is one of the most unsettling scenes in this movie: watching a small snakelike figure emerge from a deformed cradled shape and eventually cut off somebody’s hand isn’t too pleasant, and watching Voldemort stroke Wormtail’s hair is… awkward... to say the least.

It didn’t have to be this way

It’s possible to envisage an alternate outcome had it not been for Harry’s (admirable) sportsmanship. The first person who touched the cup (in this case, Harry) would have been transported to the graveyard alone and the other (our poor Cedric) would have been taken out of the maze alive.

How is this competition allowed?

Genuinely, how does a school allow a competition that lets people die in their effort to fulfil a “magically binding contract”? The safeguarding at Hogwarts (or lack thereof) is one to behold.

The reaction to Diggory’s death

By far the most tangible reaction to Cedric’s death comes from his father Amos, whose scream forms a pit in my stomach. But the death of Cedric, who was simply in the wrong place at the wrong time, was brushed off in the film. In particular, I was a little taken aback by Ron at the end of the movie, who casually asks, “Are we ever going to have a normal school year?” Somebody’s just died, Ron!

This lack of care is also subtly seen in Ron and Hermione’s reactions — when Dumbledore mentions Cedric Diggory was killed by Voldemort, Ron, for some unknown reason, rolls his eyes and shakes his head. What was with this guy in this film?

This article was originally published on November 16, 2015