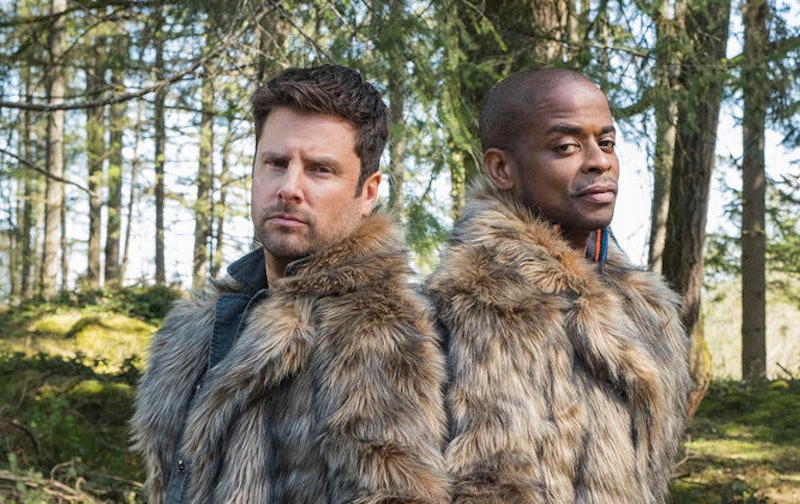 Major spoilers ahead. The Psych sequel, Lassie Come Home, may have only just hit Peacock, but the cast is already looking ahead to a potential Psych 3. "A lot of great movie franchises have come in three parts, and it would be kind of weird if we just did two," James Roday Rodriguez (Shawn Spencer) tells Bustle.

Psych series creator Steve Franks (who also directed and helped write both films) said at New York Comic-Con in 2017 that he had a plan for six Psych movies. But Rodriguez, who also co-wrote both films, is just taking it one at a time. Still, he thinks there's plenty to build on in a third movie. For example, at the end of the second film, Gus (Dulé Hill) finds out that his girlfriend Selene (played by Hill's real wife Jazmyn Simon) is pregnant.

"I'm sure Gus is going to have read every single parental book, but still have no idea what he's doing," Hill says. "Somehow he's going to end up coming to Shawn for some advice, which is going to be the absolute wrong way to go." He adds that he thinks Gus will, in typical Gus fashion, "Overdo it in every way. He's going to swear he has all the answers, but at the same time, realize that he has none of the answers."

Hill also hopes to see Selene continue her friendship with Juliet (Maggie Lawson) after the two forged a hilarious bond in Psych 2. Lawson agrees, saying that Simon is "one of the funniest people" and great at improvising in scenes, which Lawson wants to see in action again. In addition, Lawson wants to see Juliet continue to move up the ranks of the police force and maybe do some more undercover work.

As for Rodriguez, he has one simple request: "I just want to do one zero-gravity scene," he jokes. "Where we float around and try to eat and drink stuff. I feel like that has to happen before it's all said and done."

Maybe the next movie will be Psych 3: In Space?

More like this
Hallmark’s The Way Home Is Like 'This Is Us' Meets 'Back To The Future'
By Grace Wehniainen
Here’s Everything Coming To & Leaving Netflix In February
By Jake Viswanath
The 'New Amsterdam' Series Finale Opens An “Unexpected” Door To The Future
By Brad Witter
Yes, You Can Stream ‘To Leslie’ In The UK Now
By Sam Ramsden
Get Even More From Bustle — Sign Up For The Newsletter
From hair trends to relationship advice, our daily newsletter has everything you need to sound like a person who’s on TikTok, even if you aren’t.