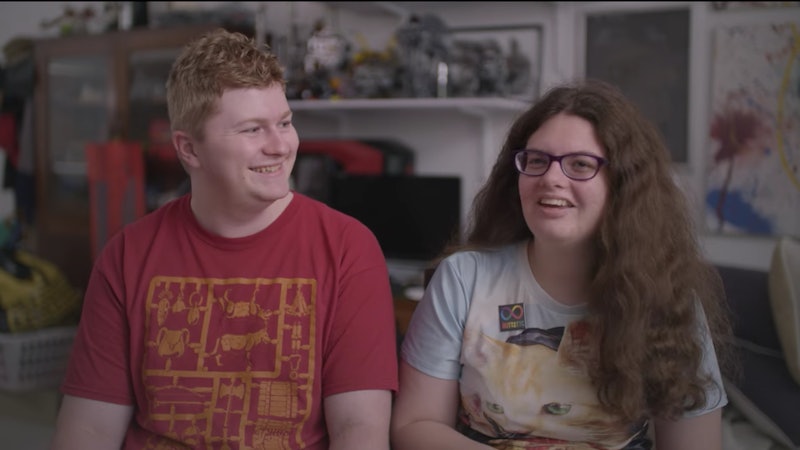 Just a few weeks after the show's premiere on Netflix, the Love on the Spectrum cast reunited for a special update video, telling fans what the stars of the reality series have been up to since they stopped filming. The update came with a few exciting announcements from the cast — including news of Ruth and Thomas' wedding and Maddi's first job at a doggie daycare. And the cast also dished on how they've been spending their quarantine or shelter in place time during the pandemic, with activities ranging from writing movie reviews to art projects.

Love on the Spectrum premiered on Netflix on July 22, following autistic singles and couples as they navigate dating, relationships, and love. The series, which originally aired in Australia in November of 2019, has been praised for pushing back on misconceptions about dating on the autism spectrum, primarily that autistic people aren't interested in dating or romance. Each star had a different hope for their romantic future: Michael was looking for a longterm partner; Chloe realized after disappointing dates with men that she primarily wanted to date women; and couples Ruth and Thomas and Sharnae and Jimmy planned for their futures. On Monday, fans got to see what those futures are looking like right now.

In the short, pseudo-reunion episode, Love on the Spectrum stars Ruth and Thomas announced that, since their time filming the show, they had officially tied the knot and achieved thleir longtime goal of moving to a new place. "We've got married, hooray," Thomas said in the video. "And we've been able to move out of the unit we were renting into a house next to the railway, which I'm enjoying."

Several of the other cast members offered updates on their professional lives. "I actually have a job now," Maddi said. "It's this doggie daycare, people drop their dog for the day or overnighters." She added: "It's a bit difficult because I've never had a job before." Meanwhile, Olivia revealed that she's still acting despite the lockdown, meeting with her theater company over Zoom, and Kelvin has continued drawing — he even showed off a drawing of Naruto at the Tokyo Olympics. And Andrew is still happily working as an administrative assistant.

The stars of the show also reflected on their experiences filming Love on The Spectrum, and how it changed their lives. "I think just being out on a date was something I'd never done before," Maddi said during the reunion. Meanwhile, Olivia said that she, "figured out that I need a creative person" for a partner. And speaking of his goals for the future, Michael said his list included "buying a house, getting a cat, becoming a husband, becoming independently wealthy, and establishing a voice acting career."

Season 2 of Love on the Spectrum is already underway, and though the original cast members have become beloved, next season will follow a brand new cast of young adults searching for love or romance.