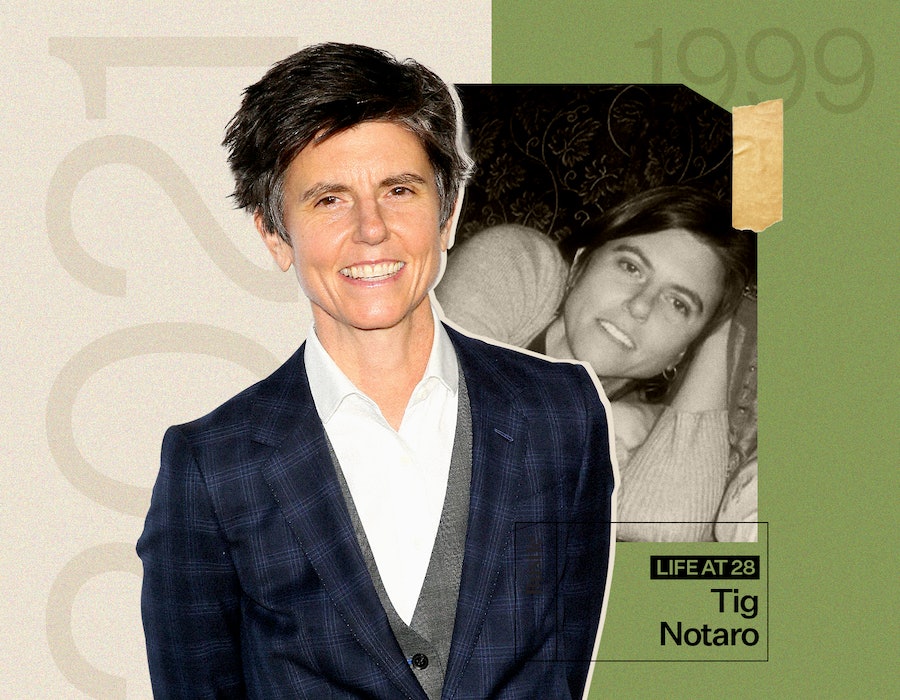 In Bustle’s Q&A series 28, successful women describe exactly what their lives looked like when they were 28 — what they wore, where they worked, what stressed them out most, and what, if anything, they would do differently. This time Tig Notaro — who stars now in the new Netflix movie Army of the Dead — discusses the moment she began pursuing standup in earnest, and what she’s learned since.

It took the world 50 years — and a legion of zombies — to appreciate just how hot Tig Notaro is. When the trailer for Netflix’s Army of the Dead was released in April, amid the onslaught of CGI-augmented action sequences Notaro was all the internet could look at. Something about seeing her as a helicopter pilot, cigarette dangling from her lips, struck a nerve. “My wife was like, where has everyone been?” the comedian laughs.

If a younger Notaro were told of this online frenzy, she’d be “a little confused,” she tells Bustle. “I'd want to see the timeline of how I got there... even being a low-key stand-up or being gay, there's not mainstream appeal there. Certainly for somebody to say, not only is all of that okay, but right after I turned 50 years old, I'm trending on Twitter for being a badass and being hot or sexy. There's no part of me that would think that that was coming. No part of me thought that the day before it happened.”

Even if her wonderment at being deemed sexy hasn’t changed in that time, a lot else has. Nowadays, Notaro is a Grammy and Emmy-nominated comedian, and continues to earn acclaim for her writing, acting, and stand-up. But at 28, she had just started to seriously pursue a career in entertainment. It had always been the dream, but making it as a comedian seemed about as likely as becoming commander-in-chief. “Obviously, it's been proven that anyone really can become the president of the United States,” she notes — but 1999 was a different time. Notaro had recently moved to LA with some friends who were pursuing careers in Hollywood; once she’d arrived and unpacked the U-Haul, she realized how many opportunities there were to get in front of an audience.

“That's when I got on stage, in the first two weeks that I moved to LA,” she says. “And I haven't stopped until the pandemic.”

Below, Notaro talks about finding a gay community in LA, embracing a career as a “professional clown,” and the advice she’d give her younger self.

I was in Los Angeles, and I was working for Sam Raimi. I think I also worked at a coffee shop, yeah. I was doing stand-up comedy, open mics.

By then, were you already comfortable on stage? Was there ever an adjustment period?

Yeah, I was definitely comfortable by that time. I would say in my first year I really got comfortable pretty quickly. I always say it was similar to coming out or realizing my sexuality. Once I figured it out, I was like, “Oh, this is it.”

Were you ambitiously pursuing a career in standup?

I think there was a part of me that couldn't take taking comedy seriously... I was like, I can't be an ambitious comedian. That just sounds ridiculous. I didn't understand how that even happened. It wasn't really in my personality. I had been such a failure and dropout in my “school career,” I thought, what, I'm going to be a clown now and be ambitious? So I just didn't.

Then one day it came over me, where I thought, well, this is what I really want to do. I'm so lucky that I've stumbled into this, only to find out that this dream of mine is a possibility. I'm in a town that can make that actually be something, so why would I not? Because I'm scared I'll look stupid trying to be a professional clown? So I just made this decision to take this opportunity and give it everything I had. I already was giving it everything I had, and there's no chance of half-assed stand-up. You just can't do that. But just my intentions shifted, and the path started to clear in ways that I just hadn't experienced before.

I was pretty new in Los Angeles and I couldn't believe that — I knew West Hollywood existed, but I didn't really understand, like, wow, this is a gay town. I couldn't believe that the coffee shop where I worked was predominantly a gay clientele, and that when I cleaned up for the night, I could just literally walk across the street to a bar and just hang out with the people that were just having coffee at the cafe and play pool … it didn't even have to be Friday, honestly.

Was that the first time that you had encountered that kind of community?

No, I had lived in Denver and Austin and there was acceptance, and gay bars, and gay communities, but in Denver, Austin, you would go to a gay bar and you would see gay people. I had never been to a town where you walk around and it's just, the police cars have gay pride flags on them. The whole thing blew my mind. That was very new to me. Even still, almost 25 years after moving to Los Angeles, when I drive through West Hollywood, I'm always a little like, “God, this is so great that this exists.”

What would 28-year-old you think of you now?

It would be helpful to really know, “By the way, it's never going to be an easy ride.” Once you put that out of your mind, just move forward knowing that all of the bumps, and detours, and difficult moments and stretches, it really is a part of the ride. You're not going to get past one and be like, okay, now it's smooth sailing. Because I really thought that's how life went: once you get through the hard stuff, you're done and it's smooth sailing. There's so much, always, so much good and so much bad. It's all just going to be coming nonstop. But I wouldn't change a thing.

It would be helpful to really know, “By the way, it's never going to be an easy ride.”

Is there anything else you wish you could tell yourself, or that someone had told you?

I always mention this, and I try to live by it. I heard this and I tweaked it a little bit so it's more universal: the best gift anybody can give anyone is a well-lived life of their own. I just find it really freeing when you think about how if any friend or family member of yours is living a full, happy life, it's so freeing to you. When you do that for yourself, you free everybody around you.

In the spirit of Army of the Dead, would current you or 28-year-old you fare better in a zombie apocalypse?

I hate to be cliché, but it's really astounding how much you don't know at 28. It's so much more helpful to have the time behind you and the experiences to make hopefully better judgments and decisions. I think I'm better equipped now to deal with a zombie apocalypse than I was at 28.

You’ve had time to think about it, gotten all your strategies down.