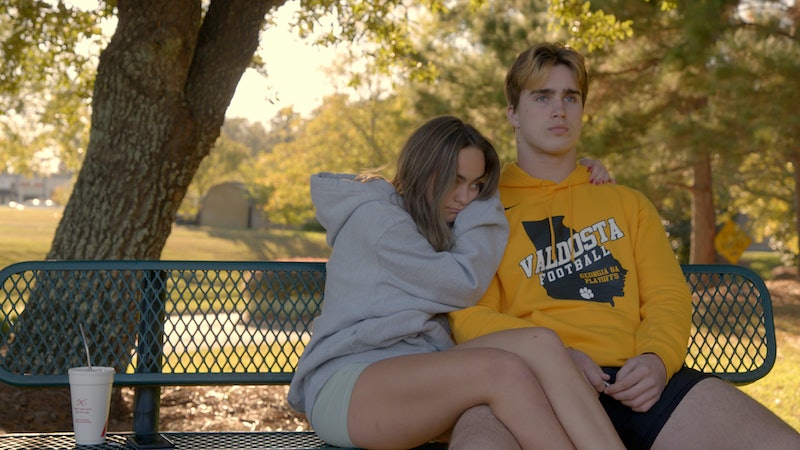 Netflix’s Titletown High is basically Friday Night Lights meets 2020’s Cheer, and the streaming service’s latest reality show currently has viewers mesmerized by the day-to-day lives of the athletic teens of Valdosta High School in Valdosta, Georgia, nicknamed “TitleTown” for its sports legacy. The series follows members of the Valdosta Wildcats football team, led by controversial coach Rush Propst, as they navigate the 2020 season — as well as the drama, relationships, and raging coronavirus pandemic that came along with it. One of the show’s key players is Grayson Leavy, a sophomore and the team’s tight end who finds himself wrapped up in a love triangle throughout Season 1’s eight episodes. Following the series premiere on Aug. 27, here’s everything to know about Leavy, his budding football career, and his relationship status.

What Is Grayson Leavy Doing After Titletown High?

Born and raised in Valdosta, Leavy was surrounded by football culture and long dreamed of the day he’d become a Wildcat for real. As his dream became a reality, however, he subsequently realized that his parents wouldn’t be able to afford to send him to college on their own and began strengthening his work ethic in order to earn a scholarship. In Season 1 of Titletown High, a major plot point erupts over Thanksgiving break as Leavy comes in close contact with someone who tested positive for COVID-19. Despite performing well in the first playoff game, he was then forced to miss the crucial second and third games to quarantine.

Less than two weeks after the exposure, Leavy tested negative for COVID-19 and immediately returned to practice, geared up for the semi-finals, and was even able to play in the game. But the Wildcats unfortunately lost and were unable to advance to the state championships. Given that he’s only a sophomore in this season of Titletown High, Leavy will have plenty more chances to win — just not in the next playoffs. Per ESPN, Coach Propst’s contract was not renewed by the Valdosta Board of Education in April 2021 due to allegations that he illegally solicited funds to cover several players’ living expenses. Due to the scandal, the Wildcats were forced to forfeit seven victories from their 2020 season and sit out the 2021 postseason, and several players have been banned from playing in the 2021 season.

Along with most of the other Wildcats, Leavy will be able to play in the majority of games this year, and he’s currently training for them. Outside of football, his Instagram page reveals that he also plays soccer, competes in wrestling, and enjoys swimming. He hasn’t posted about earning any college football scholarships, but he has plenty of time considering he won’t graduate until 2023.

Are Grayson & Zoey Of Titletown High Still Together?

Amid the show’s football storyline, Titletown High also explore’s Leavy’s romantic life, which includes a love triangle with Zoey Watson and Lenley Gross. Having met Watson in elementary school, the two struck up a young relationship, and all of their classmates knew about it. But due to the stresses of high school, they split and remained very close friends. Then he began “talking to” Gross, who grew suspicious of his tight friendship with Watson, who never denied that she still loved Leavy. After kissing Watson and admitting he was hesitant to commit to Gross, Leavy was asked to pick between the two girls and chose Watson, ending his relationship with Gross.

Leavy remained close with Watson throughout his COVID-19 scare, as she chose to quarantine with him in solidarity. But at the end of the show, it’s hard to gauge their exact relationship status. Per their Instagram accounts, Watson shared a few photos with Leavy in March and geo-tagged them “In Love,” and the pair attended a concert together with friends on Aug. 18. Even if they’re not romantically involved, it seems the two are still super close.

More like this
‘The Ultimatum: Queer Love’ Is Officially On The Way
By Radhika Menon and Kadin Burnett
Here’s When You Can Expect More ‘Indian Matchmaking’
By Brad Witter
What’s New On Netflix: Ana De Armas’ 'Blonde' & A Nick Kroll Special
By Arya Roshanian
Here's How To Apply For 'Love Is Blind,' No Matter Where You Live In The US
By Grace Wehniainen
Get Even More From Bustle — Sign Up For The Newsletter