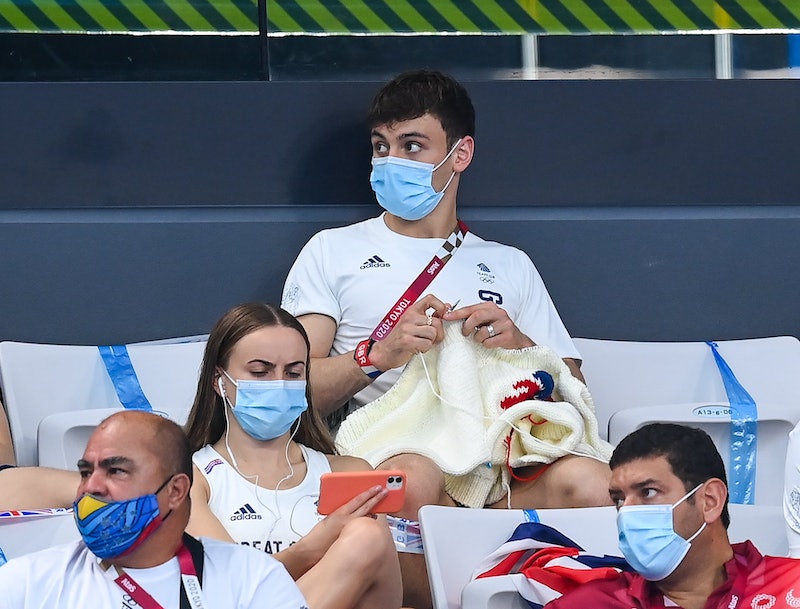 Other than being a two time Olympic medallist (winning a gold with diving partner Matty Lee at Tokyo 2020, and bronze in London 2012), Tom Daley is also known for being a massive fan of knitting and crocheting, citing it as a source of comfort among the pressures of being a world-class athlete. And, in a recent interview with the BBC, Daley revealed that his love of the craft was due to his husband, Dustin Lance Black, who first suggested he take it up.

Speaking to the BBC, Daley explain “It was actually Lance who said that, on set, people will knit squares just to pass the time and I was like: OK, I'll try that.”

The rest is history: “So I started trying it, and fell in love with it and here we are.”

Speaking of knitting as a way to keep his hands busy, he said, “I’m terrible at sitting still. In the Olympic village, you can find yourself over-thinking so many things. This is like my form of escapism to get away, pass the time and not have to think about diving.” In Tokyo for instance, Daley was photographed knitting in the spectator stands during the Olympics; he also crafted an adorable cosy for his gold medal.

“When I say I'm obsessed with knitting, I was knitting on the way, on the bus to the pool, on the bus home from the pool, in the stands, whenever I had a spare moment,” he said. “While the other boys in our apartment were playing video games, I would just sit and knit. I'd wake up and if I had time to sit and knit, I would just continually knit.”

In the same interview, he also revealed that his historic gold medal win with Lee almost didn’t happen. He said, “My knee started clicking really badly and clunking but there was no pain, and I thought ‘well this is really weird’ and that had been for about a year.”

Standing up after a session of meditation, Daley recalled that his knee “clicked” and “felt different.” He continued, “I woke up the next day and I couldn't walk. My knee was locked into position.”

What was the cause of the injury? The meniscus (a cartilage in the knee) had “torn away, flipped up, and got stuck in the joint so my knee was locked,” he explained. The injury called for a surgery — one that demanded a recovery period of four to six weeks. At the time, Daley only had eight weeks to go before the synchronised diving event with Lee.

While it may sound like an emotionally taxing time, Daley remained admirably resolute and determined. He said, “I didn't have a choice. I had to get my knee fixed, because if I didn't, I wasn't going to be able to dive at all,” adding that “I felt strangely at peace with it, because I knew what I had to do to be at my best at those Olympic Games, doing whatever visualisation, rehab and supplements to be able to get on the diving board and be there and ready.”

The post-surgery recovery period also gave him a chance to rest, which may ultimately have contributed to his win. “I felt everything was happening for a reason. If anything, I see it as a blessing that I was able to feel rested and I hadn't just been training, training, training. Sometimes you can arrive at the Olympic Games and you can feel exhausted, whereas I know if I can arrive at the board feeling good and having the energy to dive well, I'll dive well.”