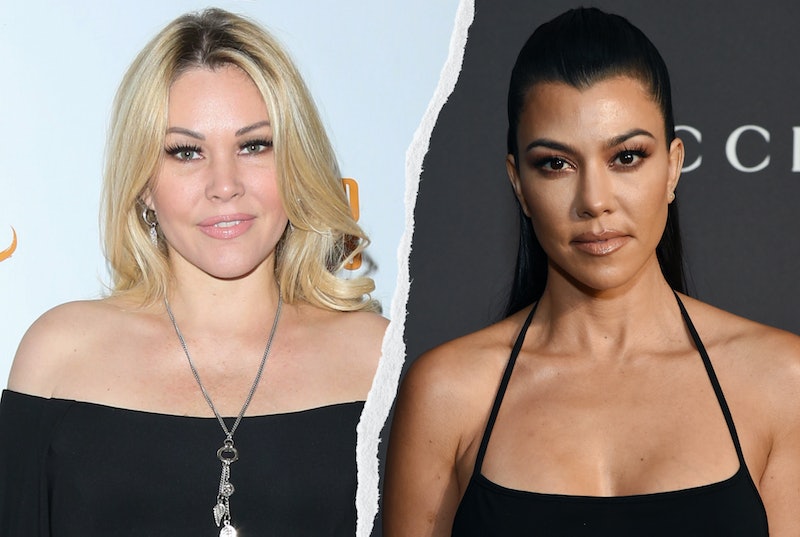 Believe it or not, not everyone is loving the PDA-filled photos that Travis Barker and Kourtney Kardashian have been sharing on social media lately. Among those who would rather not see pictures of the Blink-182 drummer caressing the reality star’s bare bum is his ex-wife, Shanna Moakler, who seemingly just threw shade at the hot-and-heavy couple for posting their relationship all over Instagram.

Moakler’s latest bit of shade came after Barker and Kardashian shared images from their recent trip to the desert. In one of the photos, the 42-year-old Poosh founder is straddling the musician as he grabs onto her cheeks (yes, those cheeks). “Just like heaven,” Kardashian captioned her post. Barker also shared a carousel of steamy pictures on his own account, one of which shows him holding onto the KUWTK star’s bare butt. “Anywhere with you,” he wrote.

According to screenshots captured by Buzzfeed News, Moakler clearly isn’t into couples who flaunt their relationship on social media. Earlier this month, she posted a photo of her boyfriend, Matthew Rondeau, kissing her hand on her own feed. “He makes me happy,” she wrote. But when one of her followers criticized her and Rondeau for not posting about each other more, Moakler had a very pointed and shady response. “Unlike some people, my relationship status isn’t based on social media posting,” she wrote. “I’m happy on life not on IG.”

This wasn’t the first time Moakler seemingly bashed Barker and Kardashian’s relationship. Per Buzzfeed News, the model started liking underhanded Instagram comments about the couple in February, just hours after they officially confirmed they were dating. One of the comments Moakler reportedly liked said that “Travis downgraded bigtime.” Just a few days later, she posted some less subtle shade with a quote on her Instagram Stories: “Stop complaining about your life. There are people out there dating your ex.”

After seeing Moakler’s post, Kardashian retaliated by posting a fitting quote of her own. “Stop social media stalking your ex,” her post said. She also linked out to a Poosh article titled, “How To Break The Habit Of Stalking Your Ex On Social Media,” just in case her message wasn’t clear. But unfortunately, Moakler isn’t the only ghost from the couple’s past who has taken to social media to drag their relationship.

Earlier this week, Kardashian’s ex-boyfriend Younes Bendjima shared a quote on social media that raised some eyebrows. “Shamelessness has become so normal in today’s society, that modesty has become strange,” he wrote shortly after the Keeping Up With the Kardashians star posted her provocative photos from the desert. Later, however, he clarified that what he wrote was apparently not about Kardashian at all. “Stop attaching myself to people that are not part of my life anymore,” the 27-year-old model wrote. “It’s been two years let’s move on.”

Bendjima’s questionable Instagram Stories came shortly after reports that another one of Kardashian’s exes has been struggling with her new relationship. According to People, Scott Disick — who shares three kids with Kardashian — “has been jealous” and can tell that her relationship with Barker is very serious. “With Travis, he is struggling even more,” a source told the magazine. “Before Travis, Kourtney's relationships were never serious. It was more like flings. With Travis, it’s different.”