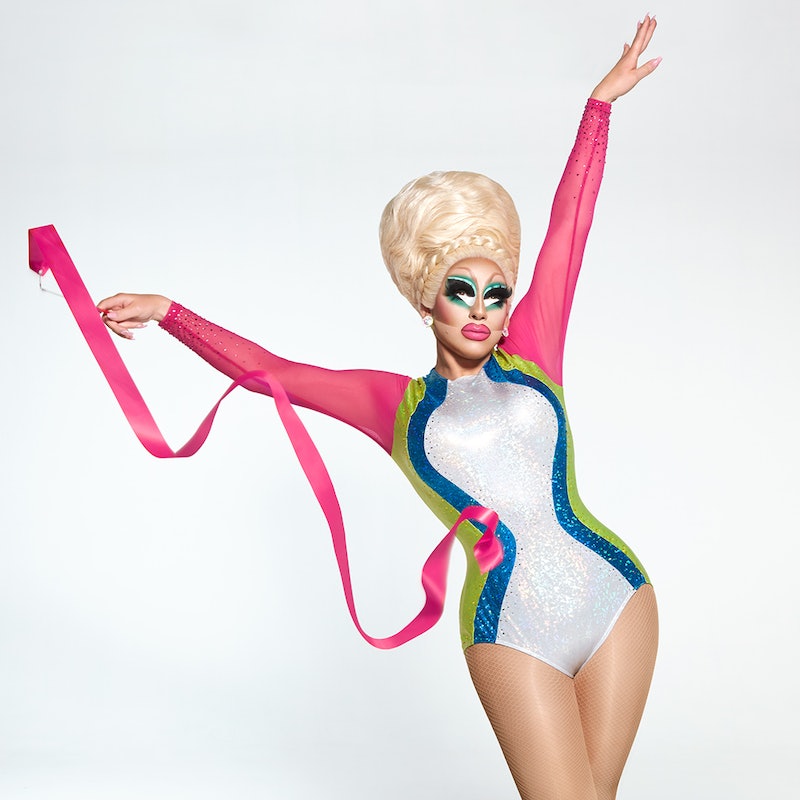 Trixie Mattel is the busiest man in a wig in showbiz. Since winning RuPaul’s Drag Race All Stars 3 in 2018, Trixie has continued elevating her personal brand, launching projects, and subsequently providing a post-Drag Race roadmap to inspire other drag queens to succeed in different industries after their stints on the Emmy-winning show. Trixie is booked and busy — plus as successful as she’s ever been. And as Drag Race keeps creating spinoffs like UK vs the World and the upcoming all winners season (Superstars), fans are curious to know if Trixie would return to compete.

“Probably not, no,” the CEO of Trixie Cosmetics tells Bustle via Zoom after finishing an eight-mile run in Palm Springs. “For some people, competition brings out the best in them. It’s not my favorite thing. Believe me when I have dreams about competing on Drag Race, they’re not usually dreams, they’re usually nightmares, so I’m cool. At 32, I don’t think my heart could take it. I’m done competing. You win so you don’t have to do it again. You don’t win the Hunger Games so you can go kill people again. It’s just not my thing. ... I’m not that great at competing, honestly.”

Trixie spent much of the conversation talking about what else she’d like to do in addition to her existing gigs, which include two popular web shows with Drag Race alum Katya (WOW Presents’ UNHhhh and Netflix’s I Like To Watch) and a new Discovery+ reality show titled Trixie Motel that sees her renovating and opening a motel. Later in 2022, she’s releasing her first double album, The Blonde & Pink Albums, following the releases of singles “Hello Hello” and “This Town” with Shakey Graves. Trixie and Katya also have a Substack newsletter called Gooped, and they’re about to announce their second book. On top of that, Trixie recently purchased a gay bar.

Below, Trixie discusses being a judge on Paramount+’s singing competition show Queen of the Universe, creating Trixie Motel, working with Katya, and wanting to be on late-night TV.

I can’t believe the year you have coming up.

Yeah. It’s a little insane. Well, every single industry I work in is freelance, so having a calendar with work on it for as far as you can see is actually really a blessing. Performers don’t usually have job security so it’s really nice. ... Every year I keep going like, “Wow, this is going to be my year. This is going to be Amy Schumer’s 2015.” And then the next year gets wilder and wilder and wilder. But she knows though. Speak it into existence. The last time they asked me to do Drag Race, I said, “No, I’m ready for a phase of my career where I get to sit on a judge’s table and look beautiful and tell hilarious jokes,” and then I got Queen of the Universe.

Me and my boyfriend would always joke about how cool it would be to own a property called the Trixie Motel and then we did that. So be careful. People in the universe are listening and things happen.

I love that you have been able to incorporate your friend Katya into everything, but does that ever become too much?

We don’t hang out outside of work because we work together. We probably talk every day for under 10 minutes on the phone, usually it’s not work. So no, it’s fine. When we both get sick of something though, we almost bond over it. You know what I mean? If there’s a day where we don’t feel like going in to shoot something, we both feel that way usually and so that’s when we bond over it.

I didn’t realize there was a second book. Has this been announced?

I don’t think it’s been announced. I’m probably going to get fired for saying it, but no, it hasn’t been announced, but it’s really good. It’s called the Book of Genesis, kind of about God. You’re going to love it. I will say we, at this point, don’t want any extra projects together though.

In addition to coming from the Drag Race world, you are still a die-hard fan. Have you been watching Season 14? What do you think of the chocolate bar? Anyone stand out?

No, haven’t seen it.

Wow. I’m surprised by that.

I don’t have time! I don’t watch anything. Right now I’m watching old episodes of Reno 911 and I’m obsessed with it. Obsessed with it. That show is so funny. So I’m watching that right now. That’s all I’m watching. And then sometimes in bed at night, because I’m an executive producer of Trixie Motel, I watch cuts of the episodes.

How is Trixie Motel going?

Absolutely none of you are in any way prepared for what is about to happen to you on your televisions. It is unbelievable. It’s like Avengers Endgame, Disneyland, Universal on steroids, on molly. The only thing I could compare it to would be it’s a motel in drag. That’s what it is. Every room is in drag.

What does Trixie Mattel still want to do? What are your unrealized ambitions?

I want to play on late-night television so bad. I mean I’ve been on so many things where I have been the guest with more followers than the real guest or I get to do these crazy big music tours and music festivals. And I never get to play music on these late-night shows. I never get to be on the couch talking about my things on these late-night shows. I used to watch the celebrities talk to the people behind the desk with my grandma and grandpa.

I would love to open another bar. I love my bar, This Is It, but I would love to open a club, like a real nightclub here in Palm Springs or in Los Angeles. There’s no drag queen-owned drag bars. Drag queens are the reason anyone goes and drinks and then we make these other people all this money. I’m like, “Hello. Why aren’t we putting on shows and keeping it?”

Last year ... I got super into making ice cream from scratch three times a week. And then I was reading a bunch of nonfiction books about the science behind ice cream. And I was like, “I want to open a whole cream truck.” I was like, “How is there no drag queen-owned ice cream truck?” I mean, I’m always thinking of something. I’m always scheming. I get really into why not? We live in a world of why not. Or we live in a world of why and I’m always like, “Why not?”

I love how your ambitions are TV, businesses, light vandalism.

Well yeah, every gay likes to tweet, “Be queer, do crime.” And I’m like, “No, let’s really do something. Let’s hurt someone.” So I mean, let’s spray paint something. I’m always thinking of stuff. For the makeup company alone, we have so much coming out this year. So many cool collabs and innovative products. We’re already planning makeup well into 2023. We can’t make enough makeup for people to keep it in stock. People are just obsessed with it. People are working from home, painted up like whores the way they’re buying makeup.

Makeup is such an important expression of self-care and creativity. And the only time people really look in the mirror and say, “I’m fucking beautiful.” No one ever does that, unless they have makeup on. It’s great that makeup is the catalyst for that.

Now that you are at this level, do you ever miss not having to do things at this level? Like just doing a late night bar show instead of filming your reality show?

But then I do it. This week I called Chill Bar in Palm Springs. I know the owner and I said, “Hey Rob, do you have a DJ Sunday?” He said, “Why, what's up?” And I said, “Well, I have off from filming Trixie Motel, can I come DJ for a little bit?” And he said sure. They give me the local DJ rate, nothing fancy. I don’t even think they advertise it. I’m just going to go in from four to eight to DJ. In Los Angeles, I do stand up in full drag for $50 all the time. I love doing low pressure things.