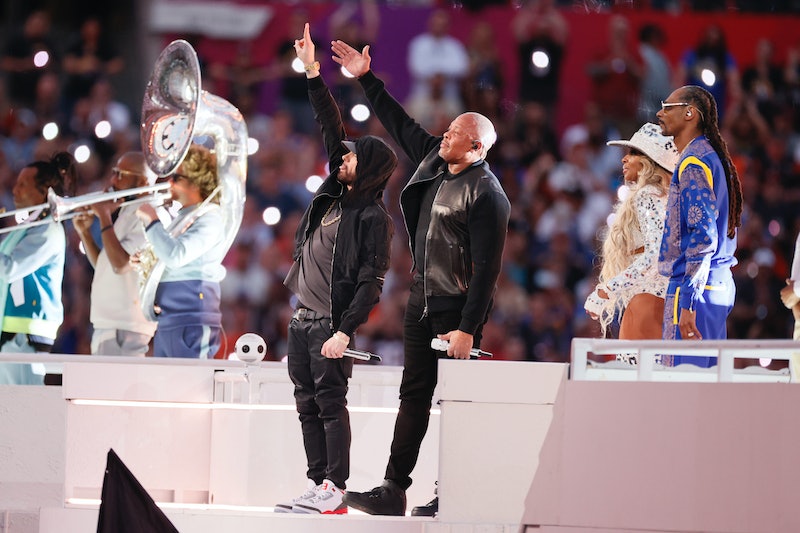 When fans got wind that the 2022 Super Bowl Halftime Show would bring together California rappers Dr. Dre, Kendrick Lamar, and Snoop Dogg, as well as Eminem and Mary J. Blige, plus a “surprise guest,” the rumor mill kicked into overdrive. Some fans wondered whether the stars would pay tribute to Tupac Shakur, who died in 1996, during the performance — and perhaps he would be the special guest during “California Love,” his song with Dre, in the form of a hologram?

It wouldn’t be unprecedented. When Dr. Dre and Snoop Dogg co-headlined the Coachella Music Festival in 2012, Tupac was resurrected as a hologram to “perform” alongside the duo. Reactions to the then-revolutionary technology were mixed, with some fans praising Dr. Dre’s vision and others feeling uncomfortable with Tupac’s image being used when he’s not alive to give approval.

Yet on Feb. 13, Dr. Dre didn’t end up bringing out hologram Tupac after all. He did, however, pay tribute to him on two separate instances during the set. Most expected “California Love” would be involved in some capacity given the game took place at Los Angeles’ SoFi Stadium, and Dr. Dre did not disappoint, joining Snoop to perform the classic jam at the beginning of the show. Additionally, after Snoop, Blige, and Lamar performed a medley of their top songs, Dr. Dre played the intro of “I Ain’t Mad At Cha” on the piano, making for a subtle but poignant nod to his former collaborator.

READ NEXT: The 5 Most-Watched Super Bowl Halftime Shows Ever

Twitter was touched by Dr. Dre’s tributes to Tupac (which you can watch here), with the rapper’s biggest fans applauding the reference to “I Ain’t Mad At Cha.” However, some were a little upset that the Tupac hologram didn’t make an encore appearance nearly a decade after its debut.

No matter where Twitter stands on the Tupac hologram, everyone agrees on one thing: Tupac would have been a welcome addition to the Super Bowl stage if he were still here.