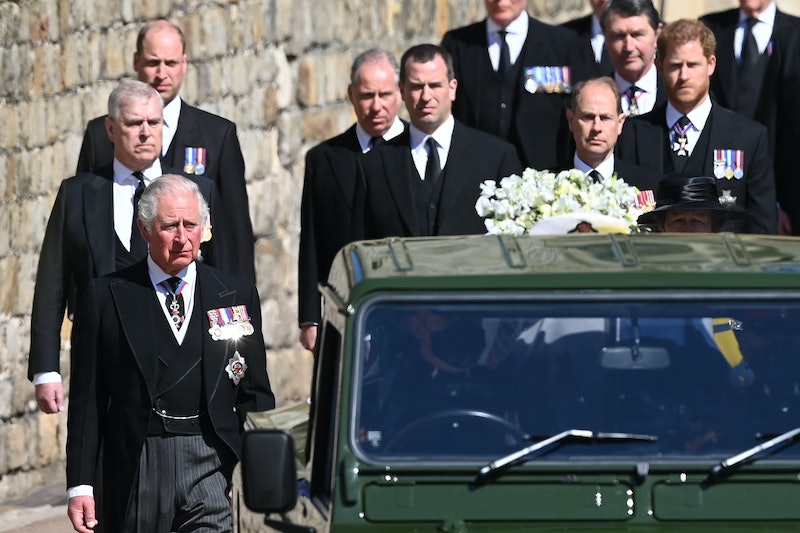 As members of the royal family gathered for Prince Philip’s funeral at St. George's Chapel on the grounds of Windsor Castle on Saturday, April 17, many around the world mourned along with them. The final goodbye to the Duke of Edinburgh, who died at Windsor Castle on April 9 at the age of 99, began with a National Minute’s Silence ahead of the intimate service attended by 30 people. Prince Charles and Princess Anne led the short funeral procession, followed by Prince William, Prince Harry, Prince Edward, Prince Andrew, and Peter Phillips.

“The plans for the funeral are in line with The Duke of Edinburgh’s own personal wishes, and the occasion will recognize and celebrate The Duke’s life and his more than 70 years of service to The Queen, the UK and the Commonwealth,” Buckingham Palace’s official announcement read ahead of the service, noting that the ceremonial royal funeral would be similar to the one held for Queen Elizabeth, the Queen Mother.

Before the funeral, Queen Elizabeth II, Prince Philip’s wife of 73 years, shared a private photo via the royal family Instagram account, expressing gratitude “for all the messages of condolence from around the world.” Inside the chapel, the queen sat alone to mourn her late husband — an image many Twitter users found to be particularly heartbreaking.

In honor of the solemn occasion, Princes William and Harry reunited for the first time in more than a year to honor their late grandfather. The brothers flanked Princess Anne’s son Peter Phillips behind a custom Land Rover Defender, which the Duke of Edinburgh designed himself, carrying the late royal’s coffin during the funeral procession. Although much had been made of William and Harry’s strained relationship, a Buckingham Palace spokesman previously stated that they’d not “be drawn into perceptions of drama,” and “the arrangements have been agreed and represent Her Majesty’s wishes,” per People. Following the funeral, Harry even joined William and his wife, Kate Middleton, the Duchess of Cambridge, on the walk to a private wake at Windsor Castle.

On social media, royal watchers expressed varying opinions, ranging from requests of respect for Prince Philip to sympathy for the brothers and fascination with their interactions.

Meanwhile, other tweets pointed out some of the unique, personal touches incorporated into Prince Philip’s funeral. The duke’s “beloved fell ponies” were included, and the family honored his requests for “no preaching, homily, or sermon,” as well as the music he wished to be played for his arrival at St. George’s Chapel, where he’s been interred in the Royal Vault. As is custom, no family members delivered a eulogy, per The New York Times. However, Rev. David Conner, dean of Windsor, spoke of “the many ways in which his long life has been a blessing to us,” during the service.

“We have been inspired by his unwavering loyalty to our queen, by his service to the nation and the Commonwealth, by his courage, fortitude and faith,” he said, according to the newspaper. “Our lives have been enriched through the challenges that he has set us, the encouragement that he has given us, his kindness, humor and humanity.”

Surely, this is but the beginning of the tributes to Prince Philip that will continue to pour in as royal watchers honor his long legacy.

More like this
Meghan & Harry Respond To Jeremy Clarkson’s "Apology" Over *That* Column
By Sophie McEvoy
Prince Harry Incorrectly Recites Christina Aguilera’s “Genie In A Bottle” Lyrics
By Jake Viswanath
Here’s Why Tyler Perry Helped Prince Harry & Meghan Markle When They Moved
By Marina Watts
Kim Kardashian Buys Princess Diana’s Attallah Cross Necklace For $197,453
By Marina Watts
Get Even More From Bustle — Sign Up For The Newsletter
From hair trends to relationship advice, our daily newsletter has everything you need to sound like a person who’s on TikTok, even if you aren’t.