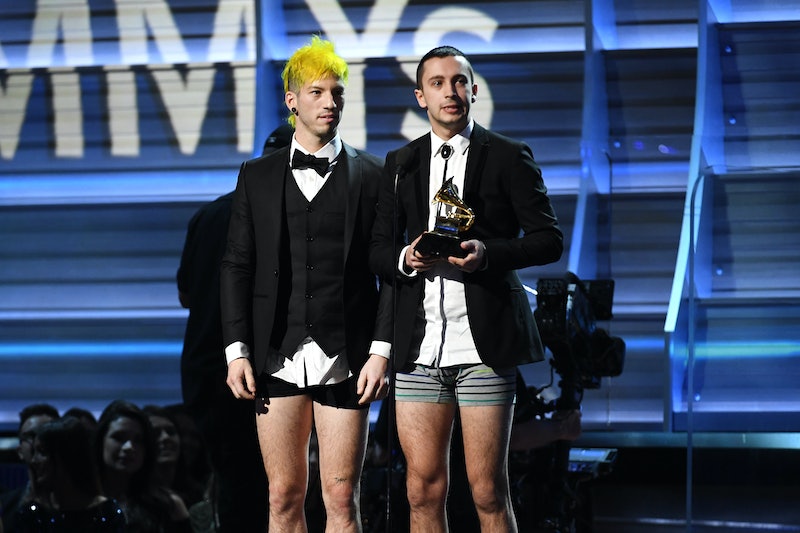 Take a trip down memory lane back to the 59th Grammy Awards. It was Feb. 12, 2017, and presenter Nick Jonas had just revealed that Twenty One Pilots had won a Grammy for Best Pop Duo/Group Performance for “Stressed Out.” As the cameras panned to focus on the duo as they stood up to accept their award, Tyler Joseph and Josh Dun shocked the world by pulling their pants down and kicking them off as they marched toward the stage in their underwear.

“I cannot believe we did that. I don’t know what we were doing,” Joseph told Zane Lowe for Apple Music ahead of the May 21 release of the duo’s new album Scaled and Icy, revisiting the now-infamous decision to go pants-less to accept their first Grammy.

Part of the decision, the frontman explained, came from his own “strategy” for taking photos: make them unique. That way, there will always be a memory attached to every photograph you take. He had a similar mindset when it came to accepting an award at the Grammys. “I looked at accepting that Grammy award as just a moment,” he said. “It’s like, hey, I could stand right there and take the ID straight forward. No sunglasses. No smiling. ... Or I could cock my head a little bit. Smile a little bit and take my pants off.”

Back in 2017, Joseph initially explained that the reason behind his brief acceptance speech in his briefs came from humble origins, aka sitting at home watching the Grammys in Columbus, Ohio, in his boxers with his friends. “As we were watching [the Grammys] we noticed that every single one of us was in our underwear,” Joseph said in his 2017 acceptance speech. “Josh turned to me — and we were no one at that time — and said, ‘If we ever go to the Grammys, if we ever win a Grammy, we should receive it just like this.’”

After receiving the award, that memory of the duo standing on stage together took on a new, personal meaning to Joseph. To this day, he cites Dun’s decision to strip down alongside him as a moment that really reaffirmed the duo’s strong, supportive friendship. “I do think that the most amazing part of that story is the confidence and the security in my friendship with Josh that I would take my pants off first, I’d start walking, and I knew he was standing behind me with his pants off,” he added. “There’s a long walk there where he could have just been like, ‘I’m good. You go ahead.’ And he could have. Just another moment where I realized, ‘Man, he quite literally had my back.’”

In a world full of complicated friendships, be a Josh Dun. Someone who will not only consistently support and encourage his or her friends’ creative endeavors, but gladly walk with them side-by-side in front of the whole world — even in briefs if needed. That’s true friendship.