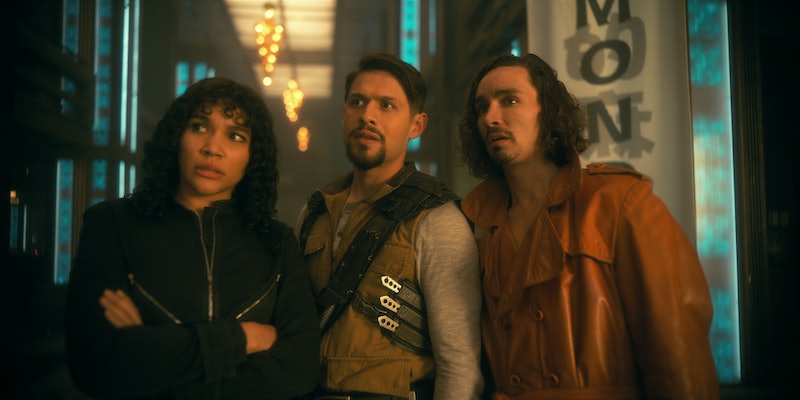 Spoilers ahead for Umbrella Academy Season 3. The universe gets a major reset in the Umbrella Academy Season 3 finale, and it looks like this was Reginald Hargreeves’ (Colm Feore) plan all along. A brief scene from Season 2 confirmed Reginald is, in fact, an alien, and he left his planet and ailing wife Abigail to set up a business on Earth and do something. That something revolved around Hotel Oblivion, a mysterious hub that houses technology that can remake the universe.

After tricking all his kids into activating it — which nearly kills them all — Reginald wipes the slate clean and averts yet another apocalypse. But in the new world, Abigail is back, and they’re in charge of everything. The Umbrella Academy, meanwhile, are all without their powers, and he’s once again abandoned them.

The final episode of Season 3 is packed with revelations, which will surely figure into a fourth season if Netflix renews The Umbrella Academy. The cast breaks down everything that happened in Episode 10 and what they think it all means for their characters’ futures.

Luther is alive, but Sloane is missing

Reginald murders Luther (Tom Hopper) before they head to Hotel Oblivion, but after the reset, Luther is alive and back in his own body. Like his siblings, he’s left without super-strength, but “his mindset is really on [his] new body and the loss of his wife,” Hopper explains to Bustle.

It’s unclear why Sparrow Ben (Justin H. Min) ends up in the same place as the Umbrellas, but Sloane (Genesis Rodriguez) is mysteriously missing. While Hopper doesn’t know where Sloane could possibly be, he’s pretty sure Allison (Emmy Raver-Lampman) didn’t just create a world where Sloane no longer exists. “I've not really felt for a while that Allison holds that kind of flame for Luther,” he says, adding that the rumoring Allison does to Luther in Episode 5 was less about romance and more about control.

“You can start to get cross-eyed,” Hopper admits when thinking about why Sloane is gone. “If [the universe is] reset, and it's these Umbrellas, then surely Ben would be the old Ben. But he's still Sparrow Ben. So, you go, okay, Sparrows do exist in this timeline. Therefore, Sloane and all the others should be alive [somewhere].”

Allison gets Claire and Ray back

Meanwhile, Allison works with Reginald to get back what she’s always wanted: Claire and Ray as her family, despite her daughter and husband being from two completely separate time periods. But it’s uncertain if she’s lost her powers too, or if she convinced Reginald to let her keep her Harlan-enhanced rumoring.

“She isn't with the other siblings when they all realize that they don't have their powers, so I just don't think that she's attempted it yet,” Raver-Lampman explains. But she can easily see Allison realizing her and her siblings’ powers are gone and that it’s her fault. “Eventually, her guilt is going to catch up with her. She has her happy ending, but she's forcefully made everybody that she loves sacrifice for her to get that.”

She added that she’s not even sure if Allison is in “Reggieville” like the rest of them — though Min jokingly adds that perhaps Allison is just living in “one house on the moon.”

Diego has a kid with Lila

When Lila (Ritu Arya) first reappears, she tricks Diego (David Castañeda) into thinking that 12-year-old Stanley (Javon Walton) is his child. But it’s just a prank to cover up that she’s actually pregnant with his kid, whom she’s worried Diego isn’t going to want. But as Castañeda explains, by the finale, Diego has “found closure with a deeper purpose to be a father now.” For Diego, losing the ability to wield his knives is much more of an “afterthought” than simply wanting to start a regular life with Lila.

And according to Castañeda, the biggest concern isn’t whether Diego can get his powers back but how he can provide for his family. “It feels like to me, what's he going to do for a job?” he says. “Maybe he becomes a security guard at a mall, like Paul Blart.”

Klaus (Robert Sheehan) tries to reconnect with Reginald in Season 3, and for a time, they seem to be bonding over mastering Klaus’ powers of immortality. But then Reginald kills Klaus before they head to Hotel Oblivion, claiming it was for his own good because he knew Klaus would find the afterlife. One would think that final betrayal would finally lead Klaus to give up on his father, but Sheehan doesn’t think so. “Klaus loves forgiving him. It’s like a fetish,” Sheehan says.

Meanwhile, Sheehan says Klaus is likely reeling from losing his powers, which might ruin his sobriety. “I think the newness of Klaus’ power, having conquered it recently, feels like a new lease on life. Feels like the beginning of an evolution,” he says. “So all of that potential being taken off him ... he's going to be in a sour mood, [and will] probably go out and seek some drugs.”

Sheehan adds that Klaus will probably “end up working at Hargreeves Industries on the assembly line ... making Christopher memorabilia, little boxes that glow.”

Sparrow Ben never quite figures out how to fit in with the Umbrella Academy members — but deep down, it looks like he really wants to. “Ben is already grappling with who he is outside of the Sparrow Academy, which starts to happen towards the end of the season with a lot of his siblings disappearing, Sloane getting married to the Umbrellas, and Sparrow Academy disbanding,” Min explains. “This is a guy who's defined his entire life with [the Sparrow Academy and his powers], and without them, he has to figure out who he is.”

Ben does storm off from the rest of the group in the final moments of the finale, but Min has hopes Ben will eventually find some happiness. “If we do get to Season 4, it'll be a period of exploration. Maybe a lot of therapy. Maybe some self-care, some massages, and some spa days for Ben.”

Viktor and Five lose their purpose

Out of all the siblings, Viktor (Elliot Page) and Five (Aidan Gallagher) might have the most challenging time adjusting to this new world without their life-changing powers. Earlier in the season, Five had a chat with Viktor about how “people like [them]” will never fit in because of how terrifying their powers are. “This is the price of being powerful. Sometimes we step on ants,” he explained. But in the end, they’re the last two to walk away from each other in the finale, suggesting that maybe they don’t know what it’s like not to be all-powerful.

Also, “Why is Five still a kid?” Hopper questions. “Because if [Luther’s] body's reset, surely something should happen to [Five] where he becomes the age he should be.” That’s another mystery Season 4 may have to solve.

Reginald and Abigail take over the world

The final shot of Season 3 is Reginald and Abigail holding hands and looking over a city they seem to own. There are skyscrapers labeled with Hargreeves Financial, Hargreeves Real Estate, and Hargreeves Construction — with a pool sitting where Hotel Oblivion used to be. Perhaps financial domination was always in their plan, but beyond that, it’s unclear what they want with Earth.

Casteñada theorizes that perhaps Abigail gives Reginald “a few little rascals running around,” so he never ends up adopting the Umbrella kids. But they all agree that Abigail will likely not be good news for Reginald’s kids or the rest of the world, for that matter. “I feel like anyone who marries Hargreeves, I wouldn’t trust,” Min says.

And it doesn’t seem like a good sign that Reginald was willing to kill all his children to bring his wife back. “What if she’s a bigger Tyrannosaurus than [Reginald] is?” Sheehan theorizes. “What if everything he was doing was all in aid of her entire scheme.”

It’s fair to speculate that Abigail is the mastermind behind the show’s three different apocalypses. But whoever she is — and whatever power she holds — will likely be explored in a fourth season that sees the Umbrella Academy face greater challenges than ever before.

More like this
Does 'Locke & Key’s Ending Mean There Could Be A Season 4?
By Sophia Moore
Shital Dropped Major Hints About Her Relationship With Niraj After 'Indian Matchmaking'
By Brad Witter
Netflix Reveals First Look At Wednesday In The 'Addams Family' Spinoff Series
By Bustle Editors
Who Plays Trent In 'Never Have I Ever'? Benjamin Norris Calls His Character A “Himbo Stoner”
By Grace Wehniainen and Radhika Menon
Get Even More From Bustle — Sign Up For The Newsletter