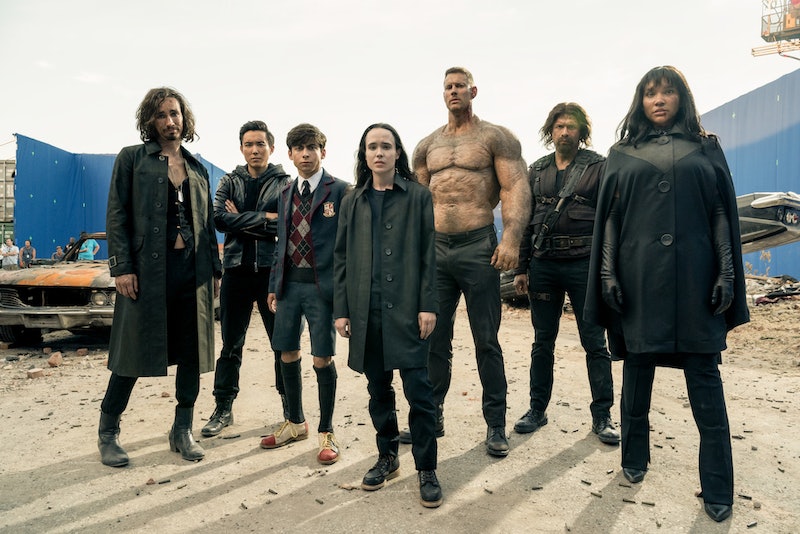 Spoilers ahead for The Umbrella Academy Season 2. The end of Umbrella Academy's second season comes with some resolution, but it also leaves a lot unresolved. Though the Hargreeves siblings are able to successfully prevent the apocalypse, they arrive to a much different reality in 2019, prompting questions like "What is the Sparrow Academy?" "How are Reginald and Ben alive?" and "What will happen to Harlan???" Thanks to some notable comics Easter eggs in Umbrella Academy Season 2, however, we actually may already have a few answers.

First, the elusive Sparrow Academy. The group — presumably part of the 43 special children born on Oct. 1, 1989 — are introduced at the very end of "Hotel Oblivion,” the third volume of the comics, in which they're only known as The Sparrows. If you're even vaguely familiar with the comics, this connection is clear. However, they're also accompanied by a mysterious floating green cube. This plays an important role in the comics, as the Sparrows emerge from a cube — one they’ve been housed in in another dimension.

As for how this could tie into a potential Season 3, fans have theorized that the cube is a replacement for Grace, Pogo, or one of the newly chosen children. Given that Reginald wasn’t very pleased with the original Umbrella Academy when they met in the '60s, it’d make sense for him to use advanced technology to find a better set of specialized children. Then again, we have to consider Harlan, who kept some of Vanya’s powers despite her seemingly taking them back. In the finale, he levitates a wooden sparrow — another nod to the comics' Sparrows. This could indicate that Reginald found Harlan in another timeline and brought him to the future.

Other comic references are much more subtle. When an exasperated Five discovers that his siblings haven't arrived in the designated spot in time to return to the original timeline in Episode 7, he laments that “It was a simple task — just be here! We didn’t have to kill a giant sea serpent, fight off an army of mutants!” This could be in reference to the comic issue “But the Past Ain’t Through With You,” in which the siblings defeated a sea serpent that attacked Japan. And in Episode 9, Ben tells Vanya that Reginald “treated you like a bomb before you were one,” likely in reference to the issue titled “Finale, or, Brothers and Sisters, I am an Atomic Bomb.”

Another notable Easter egg is Klaus’ “levitation” trick. Though he's actually just being held up by Ben in the show, he does have the ability to levitate in the comics. And finally, there are the Televator blue prints. In Episode 8, Grace snoops around Reginald’s office after Diego links him to the assassination of John F. Kennedy. The blueprints on the wall reference a device that the Hargreeves use in order to time travel in the comics. It isn't clear if the Televator will have a larger role in another season, but it's an interesting nod to the source material, if nothing else.