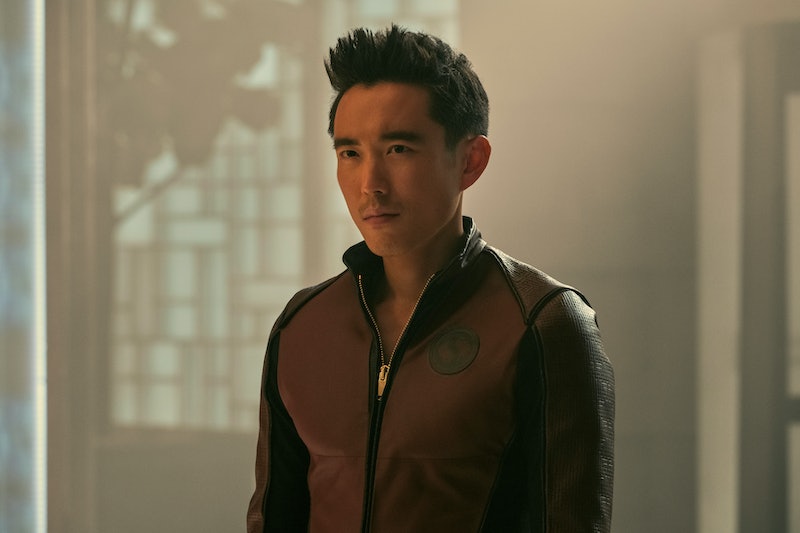 Spoilers ahead for Umbrella Academy Season 3. Klaus (Robert Sheehan) may be the immortal one, but it looks like Ben Hargreeves (Justin H. Min) has nine lives on Umbrella Academy. We first got to know ghostly adult Ben, who met his demise as a teen but dodged the afterlife for years due to Klaus’ ability to channel the dead. That Ben finally walked into the light after saving Viktor from causing a second apocalypse in Season 2, but then we were introduced to chip-on-his-shoulder Sparrow Ben in Season 3. And in the Umbrella Academy Season 3 post-credits scene, Ben appears yet again — but which version he is and what he’s doing are unclear.

To recap, the Season 3 finale reveals that Reginald Hargreeves built Hotel Obsidian around a portal to Hotel Oblivion, an otherworldly hub that houses technology that can reset the universe. (No answer just yet on who built the machine or why.) After making a deal with Allison (Emmy Raver-Lampman) and tricking the rest of his children into activating it, Reginald seems to reset the universe in his image: his wife Abigail is alive and healthy, and they have a corporate monopoly on everything. Meanwhile, the Umbrella Academy kids are all de-powered, while Allison lives in her own house with her daughter Claire and her husband, Ray. Sparrow Ben is also with the Umbrellas and storms off with the others after he realizes his powers are gone.

Basically, Reginald resetting the universe makes all paradoxes possible. Still, it’s also hard to imagine that in his perfect world, he would allow more than one set of his adopted kids to be running around. Yet the post-credits scene with Ben seems to upend that. The scene opens with Ben in a suit, quietly reading a book while riding a train in Korea that is “bound for Yeouido Station,” according to the announcer. This Ben then looks up and smirks while gazing out the window.

So what’s going on? Who is this Ben?

“It's a really great question, but one I do not have the answers to,” Justin H. Min explains to Bustle. “I filmed that scene with no context. It was a complete mystery. I was told to show up one day on a set, and it happened to be on a Korean subway. Where it's going to, who knows. If we get to Season 4, I will be finding out alongside the audience who that Ben is and where he's going.”

“Ohhh, I never thought about that being Umbrella Ben,” Emmy Raver-Lampman adds.

So is it Sparrow Ben, and he has somehow used the futuristic technology of this new world to get rid of this scar? Is this Umbrella Ben and maybe he got to live out his life with his mom since he was never born with powers? (Though, to this day, the show has yet to confirm how all of their mothers suddenly got pregnant.) Or is this an entirely new version of Ben, whose suit — which matches the rest of the professional outfits of the other people on the train — could be a hint at a new organization and plot line for Season 4?

It may be unclear right now, but hopefully, this version of Ben, like the other versions, eventually finds his way back home to the Umbrella Academy.