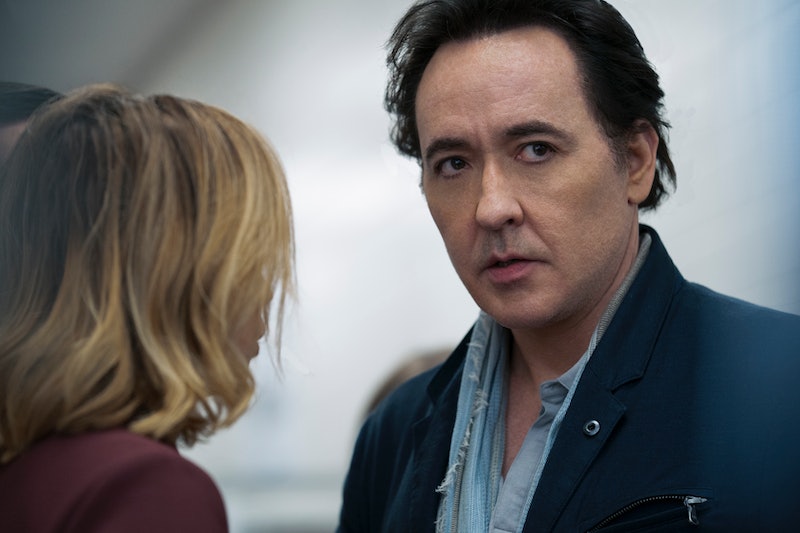 Spoilers ahead for Utopia Episodes 1-7. Every great story needs a villain, and in Utopia that's Mr. Rabbit. A bad guy sprung from the pages of the Utopia comic book, Mr. Rabbit's main goal is always to spread disease and reap the rewards. His real world appearance is unknown, and across Season 1 we meet several possible Mr. Rabbits, from doctors to shady businessmen. Though Episode 7 seems to finally confirm his identity, a last minute cliffhanger opens the door for quite a few new theories about Mr. Rabbit's identity.

To recap, Becky (Ashleigh LaThrop), Ian (Dan Byrd), Wilson Wilson (Desmin Borges), and Grant (Javon “Wanna” Walton) are avid conspiracy theorists who bond online over the comic Dystopia. They believe Dystopia, and its unpublished sequel Utopia, contains symbols that predict a world-ending pandemic. After an auction for the Utopia manuscript ends in bloodshed, the nerds realize Utopia is real, as is its protagonist, Jessica Hyde (Sasha Lane). The group ends up on the run from Mr. Rabbit and his network of assassins, eventually teaming up with virologist Dr. Stearns (Rainn Wilson). Together they agree that pharmaceutical bigwig Dr. Christie (John Cusack) has to be Mr. Rabbit. It's a great theory — that is, until Dr. Christie appears duct taped on their doorstep. So what does that mean for the finale? Let's run down everything we know so far.

I mean, he has to be, right? He's the head of a shady pharmaceutical company; the Network assassins seem to report directly to him, and he's clearly the head of "Home," a lab that's been raising children like Arby and Charlotte for nefarious purposes. It appears that it's Arby and Charlotte who tied up Dr. Christie and delivered him to Jessica Hyde, though. While falling for their trick doesn't discount that Dr. Christie is Mr. Rabbit, it may also mean there's someone above Dr. Christie pulling the strings.

We don't know a ton about Dr. Stearns' past, but he does seem too bumbling and sincere to actually be Mr. Rabbit. On the flip side, he was pretty cavalier about working with the group after getting his hand crushed with glass by Jessica Hyde. A seemingly good-natured virologist would be the perfect person for a villain to hide as, and we know Rainn Wilson can excel at playing someone who plots in secret.

What about Thomas Christie?

Of course, there's also Dr. Christie's son, Thomas. Thomas is played by Corey Michael Smith, who made a name for himself portraying the conniving Edward Nygma, aka the Riddler, on Gotham. Casting someone who's played a well-known villain on another show to be the main villain here may be too obvious, but Smith is compelling enough to make it work. It's also implied that Thomas is one of the children from the lab too, and there always seems to be something roiling under the surface whenever Thomas looks at his father.

Who is Agent Milner?

Sonja Sohn's DHS Agent Milner only has two brief appearances in the show, but she looms large as the group's only connection to the government. Though Becky, Wilson, and Ian bring her up as a possible ally to take down Dr. Christie, Milner ends up being resistant to helping them at all. Though she knows Jessica from when she was a child, Milner also sounds like she has current ties to Dr. Christie. Her big argument against Dr. Christie being a villain is that the FDA tested and approved his vaccine for widespread distribution.

Of course, this brings up the worrying question of whether Mr. Rabbit is actually someone embedded in the government — or if it's Agent Milner herself. For fans of Dennis Kelly's 2013 Utopia, this is likely the most compelling theory, as the Milner in that version ended up actually being Mr. Rabbit.

Is Arby still a villain?

By Episode 7, the terrifying assassin Arby has become a possible ally of Jessica. It's unclear how reliable he actually is, though. Is he helping them out of guilt or revenge, or did someone above Dr. Christie ultimately offer him a deal too good to ignore?

More like this
Everything To Know About The 'Daisy Jones & The Six' TV Series
By Maxine Harrison and Brad Witter
Here’s What Happens To Bill & Frank In 'The Last Of Us' Video Game
By Brad Witter
Everything To Know About A Potential 'Lockwood & Co.' Season 2
By Gretchen Smail
All The ’70s Easter Eggs You Missed In 'That ’90s Show'
By Grace Wehniainen
Get Even More From Bustle — Sign Up For The Newsletter
From hair trends to relationship advice, our daily newsletter has everything you need to sound like a person who’s on TikTok, even if you aren’t.