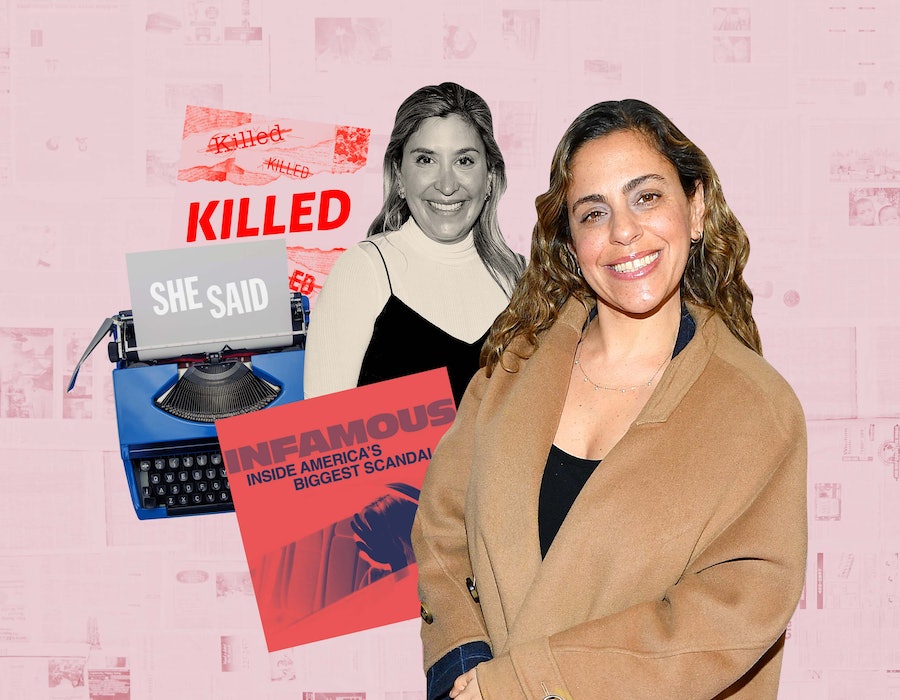 What does a woman journalist do? According to about three decades of on-screen portrayals, she wears a pencil skirt, clutches a notepad, and harbors an insatiable lust for her sources. Think Josie Geller masquerading as a high school student in Never Been Kissed, Zoe Barnes sleeping with a congressman on House of Cards, or Amy Schumer’s character seducing a profile subject in Trainwreck.

“I always joke with my female friends — I’ve never slept with any of these people! Nobody sleeps with these people,” says reporter Vanessa Grigoriadis, whose new podcast, Infamous, reveals behind-the-scenes stories from some of her wildest articles. “I can’t think of anybody who dated a source.”

Infamous is part of a trend of women journalists finally achieving main-character status — and not for unprofessional behavior but rather for savvy reporting and the pursuit of good stories. On screen, Julia Stiles played one in 2019’s Hustlers, as did Anna Chlumsky in Inventing Anna — both roles based on reporter Jessica Pressler, whose New York magazine stories inspired the projects. And the buzzy new release She Said follows New York Times writers Jodi Kantor and Megan Twohey, who broke the Harvey Weinstein story and, in turn, catalyzed the #MeToo movement. (Kantor is played by Zoe Kazan; Twohey by Carey Mulligan.) Another recent podcast, Killed, from journalist Justine Harman, delves into stories that were axed at the eleventh hour.

“We get to be the heroes, finally!” says Grigoriadis of the trend, which she credits to a rising awareness that journalists are actually “fighting the good fight” and helping sustain democracy. “Also, I think women have more power in Hollywood now,” she adds. “People are looking for more heroines.”

In Infamous, co-hosted by journalist Gabriel Sherman, she describes trailing Girls Gone Wild creator Joe Francis for a 2002 Rolling Stone profile. “It’s a story that took me by surprise in terms of how strange and sort of terrifying it was,” says Grigoriadis, who was kicked out of the hotel when Francis got arrested. When he was sprung, she hitched a ride on his private plane, which the pilot took into zero gravity.

Six episodes of Infamous, from Campfire Media and Sony Music Entertainment, have already been released. New episodes, which drop on Thursdays, will go into detail about other stories — and she has lots to choose from, like reporting on a drug lord for Rolling Stone and investigating the cult NXIVM for the New York Times.

“It’s a story that took me by surprise in terms of how strange and sort of terrifying it was.”

This new recognition for women journalists is kind of a throwback. In 1887, Nellie Bly exploded New York media by going undercover for 10 days in a so-called “lunatic asylum.” Her bombshell article for the New York World led to institutional reforms. Gloria Steinem’s career was kickstarted similarly. In 1963, she went undercover as a Playboy Bunny for Show Magazine to expose the sexist, anti-worker treatment in Hugh Hefner’s growing empire.

“Stunt reporters put a new female character in the headlines — not a victim of assault or murder — but a protagonist. Bravery was their brand,” writes Kim Todd in her 2021 book, Sensational: The Hidden History of America’s “Girl Stunt Reporters.”

Those forerunners are getting their roses now, too. Bly was honored last year with a monument on Roosevelt Island, near where the asylum stood. And in 2020, Steinem was portrayed by Rose Byrne in the FX miniseries Mrs. America.

Generally, though, being a journalist is not glamorous. Pressler has said she was surprised when creatives kept her character in Inventing Anna because “Nobody wants to see a reporter’s sh*tty apartment.” Twohey prepared Carey Mulligan for the role by telling her about running out of maternity leave and returning to work following postpartum depression.

But there are upsides to being heralded as a heroine. Pressler recently posted a photo to Instagram cheesing with Channing Tatum. Kantor and Twohey were recent Marie Claire cover stars. Who would play Grigoriadis in a movie about one of her stories? “Margaret Qualley,” she says. Or, well, a journalist can’t be too picky. “Somebody who’s not blond would be great.”

More like this
At 28, Rosie Perez Risked Her Career To Stop Playing Stereotypes
By Gabrielle Bondi
Learning To Love, Not Judge, The Lunchbox Wives Of TikTok
By Esther Zuckerman
A New Era Of Gentle Retinols Is Here
By Hannah Baxter
I Spent 2 Years Trying TikTok’s Dating Advice
By Kailynn Johnson
Get Even More From Bustle — Sign Up For The Newsletter
From hair trends to relationship advice, our daily newsletter has everything you need to sound like a person who’s on TikTok, even if you aren’t.