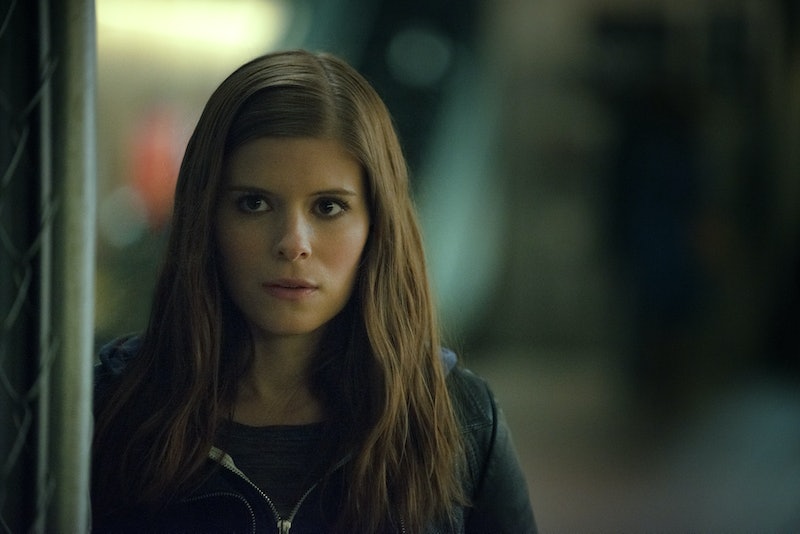 During the first season of Netflix's political thriller House Of Cards , intrepid reporter Zoe Barnes was the viewers' entry point into the convoluted, cutthroat world of D.C. politics. In a show full of oversized egos and icy, standoffish government officials, the ambitious twentysomething journalist played by Kate Mara (older sister of two-time Oscar nominee Rooney Mara) was able to act as an audience surrogate, learning to navigate the labyrinthine power structures of our nation's capital just as the audience was doing the same. But we haven't seen or heard from the character in a while, so as we refresh our memories in advance of the House Of Cards Season 4 premiere this Friday, let's remind ourselves: Whatever happened to Zoe Barnes?

(Now, I don't actually expect that any of us have forgotten what ultimately befell the intrepid reporter. It was one of the most shocking television moments in recent memory, after all. But before we talk about THAT scene, let's recap what led the young woman to that fateful subway platform…)

When we first met Zoe, she was a lowly staffer at the Washington Herald, working underneath chief editor Tom Hammerschmidt, political editor Lucas Goodwin, and chief political correspondent Janine Skorsky. When she saw Democratic House Majority Whip Frank Underwood checking her out during a social function, she decided to approach him about becoming a source in order to elevate her status at the paper. He passed her Donald Blythe's flawed education reform bill, the Herald published it… and that was the beginning of a beautiful friendship.

OK, so less of a "beautiful friendship" and more of a mutually-beneficial-but-ethically-murky-relationship-turned-affair-with-super-creepy-father-daughter-undertones. Throughout the season, Frank continued to use Zoe to spin the stories and angles he wanted in the press, and she continued to use his scoops to advance her own career, eventually moving from the Herald to jazzy internet startup Slugline. But everything changed when Congressman Peter Russo died.

Although the official story was that Peter committed suicide, Zoe had suspicions that Frank had actually murdered the easily manipulated gubernatorial candidate. So Season 1 ended with Zoe embarking on a covert investigation into her own source, with the help of both Lucas and Janine. The trio made headway when they discovered the identity of Rachel, the call girl Frank recruited to seduce Peter into falling off the wagon in advance of his untimely death.

Sadly for Zoe, she had a fatal flaw: she was always just a little more naïve than she thought she was. In the Season 2 premiere, apparently imagining that her prior sexual relationship with Frank would somehow made her immune from his wrath, she met with the newly-minted Vice President — a man she suspected of being a murderer — ALONE — in a secluded corner of a subway station. It really shouldn't have come as much of a shock when he proceeded to unceremoniously shove Zoe in front of an oncoming train, to us or her… but it did. Since Netflix had wisely used Mara's face in all the advertising for the second season, no one saw her sudden death coming in literally the first episode.

But just because Zoe was now dead didn't mean her storyline was over, right? After all, coworker-slash-lover Lucas would naturally be determined to find out what happened to her. Surely he and Janine would continue digging and eventually uncover the truth and bring justice to Zoe's killer through the power of good journalism. Right??

Wrong. This is House Of Cards, people! Last we saw of either Lucas or Janine, he was in jail after being entrapped for cyberterrorism and she was encouraging him to plead guilty before fleeing town in fear for her own safety. And that was in "Chapter 19," the sixth episode of Season 2. The whole Zoe plot hasn't even been addressed since, for the last season-and-a-half. So has the show totally forgotten about her? Have we officially moved on from the era of Zoe Barnes?

Maybe. But maybe not. After all, the original British series on which House Of Cards is based ends when (spoiler alert!) a tape of Francis' murder of the reporter is leaked to his political rival, effectively ending the Prime Minister's career. So perhaps the Netflix series hasn't abandoned this thread entirely. Perhaps the train is still idling in the station, waiting for the perfect moment to come roaring back to life and smash President Underwood into oblivion.

…Just don't count on that happening anytime soon, considering the show has already been renewed for a fifth season. It looks like we'll be waiting at least another year for Frank to get his well-deserved comeuppance.