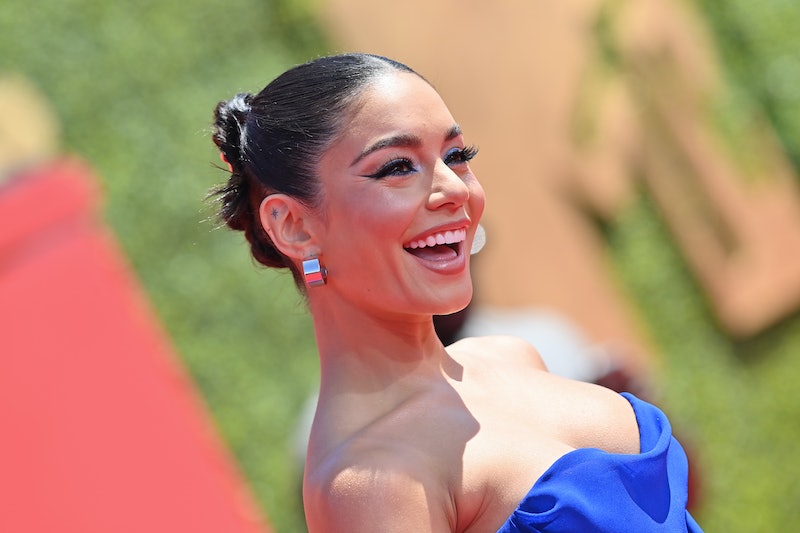 There’s only one thing that could make HBO’s hit show Euphoria even better: Vanessa Hudgens. On June 5, Hudgens joined the cast of Euphoria in a sketch for the MTV Movie & TV Awards, which was hosted by the High School Musical alum. For the bit, Hudgens took over Sydney Sweeney’s role of Cassie Howard, donning her now-infamous country get-up from Season 2 that made her classmates Rue (Zendaya), Maddy (Alexa Demie), and Kat (Barbie Ferreira) think she was auditioning for East Highland’s production of Oklahoma — except it was much tougher for Hudgens to convince them otherwise.

Hudgens starts off by singing “What A Beautiful Morning” from the Tony-nominated musical, before saying she wasn’t even aware of the production. “What? No,” she insisted, before pulling out a straw of hay and a cowboy hat. “I’m not, I’m just trying to find the perfect look. Also, parasols are very back in style, y’all.” When she kept getting questioned, Hudgens admitted that she just wanted to join the series. “I just love your show and I really wanted to hang out with you guys,” she said, leading Maddy to deliver her viral “B*tch, you better be joking” line. “B*tch, no I’m not,” she replied. “You guys are icons.”

After the sketch, Hudgens compared Euphoria to her breakout role in Disney’s High School Musical, joking that East Highland “does not do it” like Gabriella Montez’s alma mater of East High, despite sharing a similar school name. “Apparently high school musicals have changed since 2006,” she remarked. “Euphoria High does not do it like East High did. There’s a lot less singing, a lot more hair pulling, and a lot more cleavage.”

That drama is exactly why Euphoria won big at the Movie & TV Awards, taking home four popcorn trophies, including Zendaya for Best Performance in a Show. At the ceremony, Sweeney accepted two awards on the series’ behalf, Best Show and Best Fight, which she won alongside her onscreen BFF-turned-enemy Demie. “I wish Alexa was here so that she could thank the amazing fans that we have, because you all are so incredible,” she said, before nodding to one of her most memed lines from the season. “But I have to be honest, Maddy might have gotten the last punch, but Cassie has never, ever been happier.”

More like this
Austin Butler Confirms Vanessa Hudgens Pushed Him To Do 'Elvis'
By Alyssa Lapid
Vanessa Hudgens Shades Austin Butler's Elvis Accent With One Word
By Alyssa Lapid
Here’s Everything Coming To & Leaving Netflix In February
By Jake Viswanath
At 28, Debra Jo Rupp Was Living A Much Different '70s Show
By Grace Wehniainen
Get Even More From Bustle — Sign Up For The Newsletter
From hair trends to relationship advice, our daily newsletter has everything you need to sound like a person who’s on TikTok, even if you aren’t.