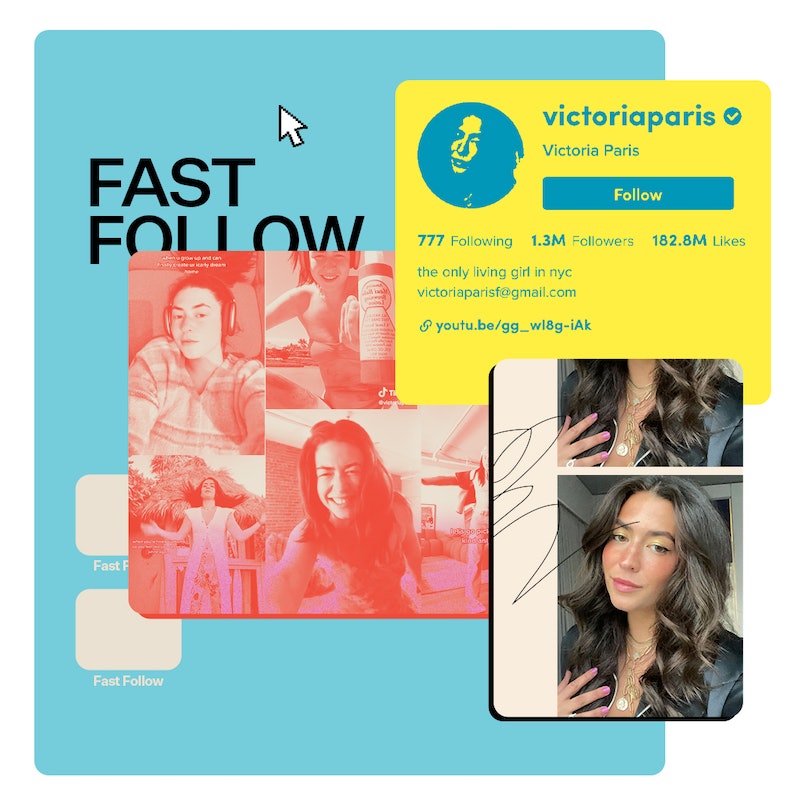 The first video Victoria Paris uploaded to TikTok in 2018 — a compilation of low-fi outfit and NYC clips — hit 50,000 views within a day. Instead of celebrating, she went off the grid. The social cleanse was part of an effort to lean into a more business-friendly version of herself: Following in her North Carolina-based financial coder parents’ footsteps, she was working as a marketing manager for a fintech company. “I was camera shy unless I was drunk, so I posted blackout, and captioned my Instagrams things like, ‘If I don’t end up a MILF, God isn’t real’ — I didn’t think employers would find that funny,” Paris tells Bustle. But when she lost her job in March 2020, she “needed to find some kind of belonging,” she says, and returned to social media.

Since then, the 22-year-old has grown her TikTok and Instagram to 1.5 million followers and billions of views. “I figured out very fast that leaning into my authenticity would benefit me,” Paris says. From her sexual frankness to her funky interior design tastes, fans are drawn to her trademark filter-free style: In one recent video, she shows off the custom wall built around her bed in her enormous loft apartment, explaining that she wanted to have, ahem, a more private space. “Basically, I built a wall because I wanted to get piped,” she says with a thumbs-up and a grin. It has nearly half a million likes.

But Paris’ social media fame hasn’t come without a cost. “My parents and I didn’t speak for seven months at one point,” she says. While making light of childhood trauma on TikTok might be healing for her, it was a lot for them to swallow. “It was hard for them to tune into my life, 24/7, and decipher what's real and what’s not.” Though they’ve reconnected, she says they can’t understand quite fully what’s happening in her world.

Honestly, she can’t either. “This is f*cking crazy that this is my life,” Paris says of how she’s been feeling lately. “I can wake up next to an extremely attractive person and live this extremely attractive life, when literally the first three years of me living [in New York], I was not living. I could barely afford to shop at Trader Joe’s.”

Below, Paris shares just how boring her open tabs are, her most embarrassing early TikTok memories, and why she’ll never slide into your DMs.

What was the last Wikipedia hole you went down?

Anna Delvey. My friends who I’m going on vacation with just watched Inventing Anna and warned me they’d be talking about it so I had to prepare myself for those conversations.

Who is your favorite person that you follow right now?

Doja Cat. She’s so funny. You know how music producers have to promote your music? Well, she went live on Instagram just floating in her pool on a floaty pretending to be dead. I love it.

What is the most interesting thing you read online this week?

There was something I re-tweeted on Twitter. It was like, “Congrats on that you survived a pandemic, so your reward is World War III.” It’s really scary to think about.

How do you feel when you watch your early videos?

What’s the best thing you were influenced to buy off the Internet?

What tabs do you currently have open?

I have tracking order status for a new rug. My Drybar appointment today. A flight check-in for my trip to Hawaii. Clear, and this Bi-Rite sample sale.

My ex took his little sister to a Harry Styles concert, and my fans were taking pictures of him being like, “He’s cheating on you. He’s here with another girl.”

Have you ever been starstruck by someone who follows you?

The first famous person that followed me (when I had 200,000 followers) was Emma Chamberlain. That was super crazy. And then recently Dixie D’Amelio just followed me on Instagram. I was like, “Let’s go.”

Did you talk to either of them?

No, I’m not the type to ever slide into anyone’s DMs before meeting. But we have a lot of mutual friends. If we run into each other and become friends, we become friends. There’s no point in forcing it.

More like this
EJ Marcus Runs The Most Wholesome Corner Of TikTok
By Alexis Morillo
TikTok’s Viral “Rating Game” Is Exposing Everyone’s Icks
By Courtney Young
What Is A “Softboy?” The TikTok Term & Aesthetic, Explained
By Courtney Young
American Girl Doll Memes Are Going Viral On Instagram & Tiktok
By Emma Carey
Get Even More From Bustle — Sign Up For The Newsletter