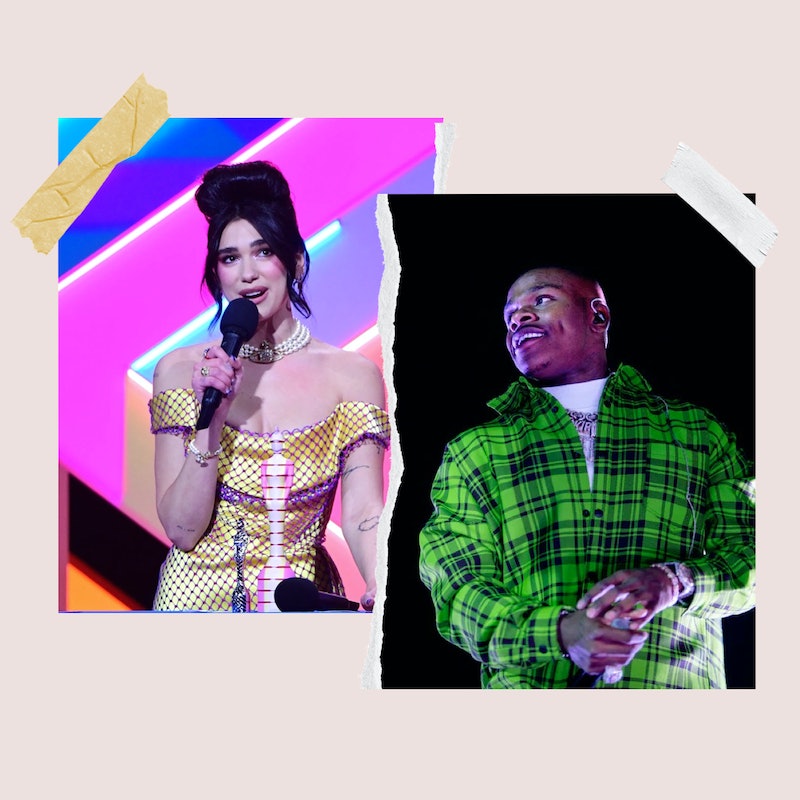 Dua Lipa’s “Levitating” just received a major honor, but her collaborator won’t be joining in on the fun. On Aug. 11, Dua Lipa’s smash hit was nominated for Song of the Year at the 2021 MTV Video Music Awards, but DaBaby isn’t anywhere to be found on MTV’s nominations list, despite appearing in the much-viewed music video. In fact, the rapper didn’t receive a single VMA nomination, marking the latest consequence of his homophobic remarks and uneducated claims about HIV/ AIDS, which have rightfully come under fire by the music industry and even been condemned by Dua Lipa and many other artists such as Elton John.

“If you didn't show up today with HIV/AIDS, or any of them deadly sexually transmitted diseases that'll make you die in two to three weeks, then put your cell phone light in the air,” he said while performing at Miami’s Rolling Loud Festival on July 25. “Fellas, if you ain’t suck a n-gga dick in the parking lot, put your cell phone lights in the air. Keep it f*cking real.” During his set, the rapper also brought out Megan Thee Stallion’s alleged shooter Tory Lanez to perform some of her songs, which may have violated Megan’s restraining order against her assailant.

As the remarks went viral, DaBaby faced huge backlash. Dua Lipa quickly disavowed the rapper on Instagram, saying she was “surprised and horrified” by his comments. “I really don’t recognise this as the person I worked with,” she wrote. “I know my fans know where my heart lies and that I stand 100% with the LGBTQ community. We need to come together to fight the stigma and ignorance around HIV/AIDS.” Music icons and HIV/AIDS activists Elton John and Madonna also spoke out, but DaBaby was still blind to his mistakes. “Anybody who done ever been effected by AIDS/HIV y’all got the right to be upset, what I said was insensitive even though I have no intentions on offending anybody, so my apologies,” he tweeted on July 27. “But the LGBT community... I ain’t trippin on y’all, do you. y’all business is y’all business.”

After initially refusing to make a video apology, Lollapalooza canceled DaBaby’s headlining set on Aug. 2. That day, he issued a statement on Instagram asking for sympathy as he tries to educate himself. “I want to apologize to the LGBTQ+ community for the hurtful and triggering comments I made,” he wrote. “Again, I apologize for my misinformed comments about HIV/AIDS and I know education on this is important.” But the damage was already done. Other festivals — including Austin City Limits, Governors Ball, Day N Vegas, iHeartRadio, and Music Midtown — proceeded to drop him from their line-ups. DaBaby’s apology has since been deleted from Instagram, with some critics now seeing his initial apology as him trying to save face and avoid cancellations.

On the contrary, openly gay rapper Lil Nas X received five VMA nominations, including Video of the Year for “MONTERO (Call Me By Your Name),” which saw him reclaim his sexuality by sliding down a stripper pole to hell and giving Satan a lapdance. As expected, the video received backlash from far-right conservatives, with one calling it “evil content” being marketed to children. If his words were anything to go by, DaBaby was also shook by Lil Nas X’s existence.

It appears MTV decided to honor an artist pushing rap forward by not only being honest about his sexuality, but putting it on full display with no apology, instead of giving even a sliver of attention to a rapper hurling homophobic and misinformed comments to the masses.

Bustle has reached out to MTV for comment about DaBaby’s exclusion.