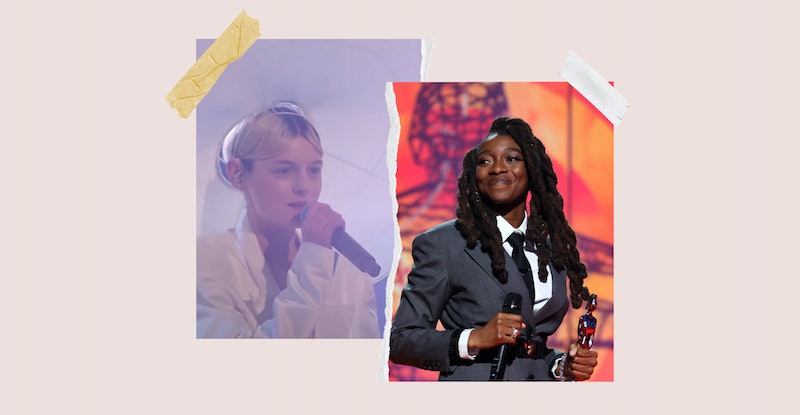 It was clear from the get-go that Little Simz would steal the show at the 2022 BRIT Awards, but an unexpected guest made her performance all the more special. In between “Introvert” and “Woman,” a figure with a massive white hat took to the stage. It just so happened to be The Crown’s Emma Corrin.

Performing a short spoken word piece to bridge the gap between Little Simz’s giant set pieces, Corrin was dressed in a dramatic Harris Reed ensemble, per the Independent, reprising the narration she performed on Little Simz’s celebrated single. (Corrin also lent her voice to five interludes to the album.)

“And so it begins, the story of never ending. Your introversion led you here, intuition protected you along the way. Alone but not lonely, the truth unveils with time as you embark upon the journey of that it means to be a woman,” said The Crown star. And just like magic, Simz’s leather coat had turned into a soft, feathered number, her stage flanked by dancers in pastel pantsuits for a joyful rendition of “Woman,” with silky chorus vocals by Cleo Sol.

Speaking to i-D about the collaboration with Corrin, Little Simz said: “I think Emma Corrin is amazing man. She’s really really talented and just a beautiful, genuine, nice soul. Getting her on the record, I just knew that her adding her magic would take it somewhere else, she just has a great voice.”

“Everything she is saying on the interludes and at the end of ‘Introvert’ are things that everyone should hear,” she added. “You interpret it and digest it how you want but she was able to narrate it beautifully and in a way that doesn’t feel preachy or like someone’s talking down at you, or you know… something you might even just say to yourself.”

Alongside shoutouts from the likes of Ed Sheeran and Adele, Little Simz also took home the Best New Artist award. Taking her mum on stage in the most moving moment of the ceremony, Simz thanked her team, her family, and God.

“Thank you so much. I’m an independent artist and to be here tonight, receiving this award, is such a blessing – I’m so grateful,” she said. “I wanna say to anyone who is watching this at home, I am living proof that if you work hard at something, no matter where you come from, your background, your race – you can be something extraordinary. This is for all the kids, keep dreaming, keep pushing. I am you, you are me. Lessons. Thank you so much.”