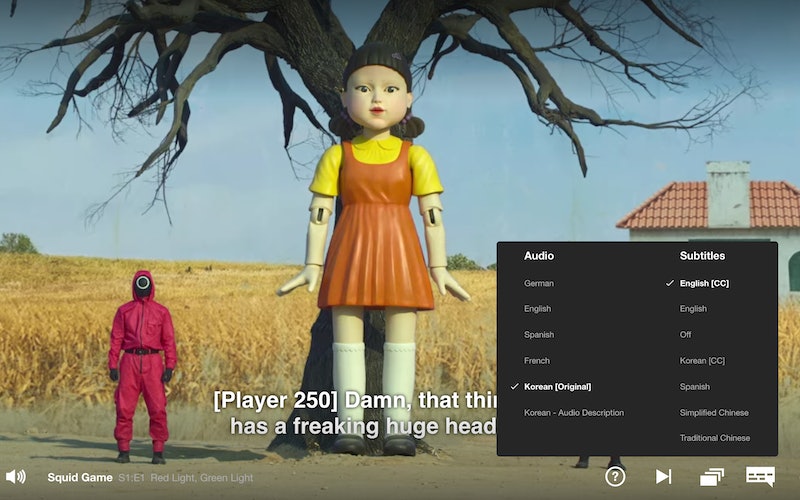 If you’ve recently browsed Netflix or spent any time on social media, chances are you’ve heard of Squid Game or seen the many TikTok theories about it, though you might not know what the show exactly is. The popular Korean drama series is still fairly new — so even though millions of fans are already craving a Season 2, countless people are still discovering it every day.

Squid Game appears to have nabbed the title of the must-see TV show of the fall since its Sept. 17 release, and now’s the time to tune in, as everyone will be talking about it all year long. The global phenomenon currently sits at No. 1 on Netflix’s Top 10 Today rankings in the United States (not to mention in many other countries, too), which is surprising to some people, considering it doesn’t feature any well-known American actors and the show’s primary language is Korean.

Creative, engaging, and incredibly violent, Squid Game is very well made and highly bingeable — whether using subtitles or dubbed voices in various languages. Here’s how you can watch Squid Game using either viewing/listening method to understand everything happening to the debt-ridden contestants participating in the deadly tournament of children’s playground games.

How To Watch Squid Game With Subtitles

All you need to watch Squid Game is a Netflix account. All nine episodes of Squid Game are available now. The actors in Squid Game recite their lines in Korean, and while that’s great for those who speak the language, everyone else around the world needs to find a way to understand what’s being said. Netflix has a solution: Viewers can decide how they want to enjoy the violent series, with two options easily available to them:

Subtitles Or Dubbing? Fans Weigh In

Viewers who aren’t fluent in Korean can either listen to actors dub over the original lines in the language of their choosing or read the subtitles while hearing the cast’s real voices, but which one is better? Both will allow the viewer to understand what’s going on, but Squid Game fans on Twitter seem to have decided almost unanimously that reading is far better than listening.

More like this
Twitter Is Very Torn About The Winner Of 'Dancing With The Stars' Season 31
By Jake Viswanath
Millie Gibson Still "Can’t Believe" She Was Cast As Doctor Who's Companion
By Brad Witter
Everything To Know About 'Elite' Season 7
By Jake Viswanath
The 'Love, Lizzo' Harry Styles Scene Is Just 1 Moment That Made Fans Feel Seen
By Brad Witter
Get Even More From Bustle — Sign Up For The Newsletter