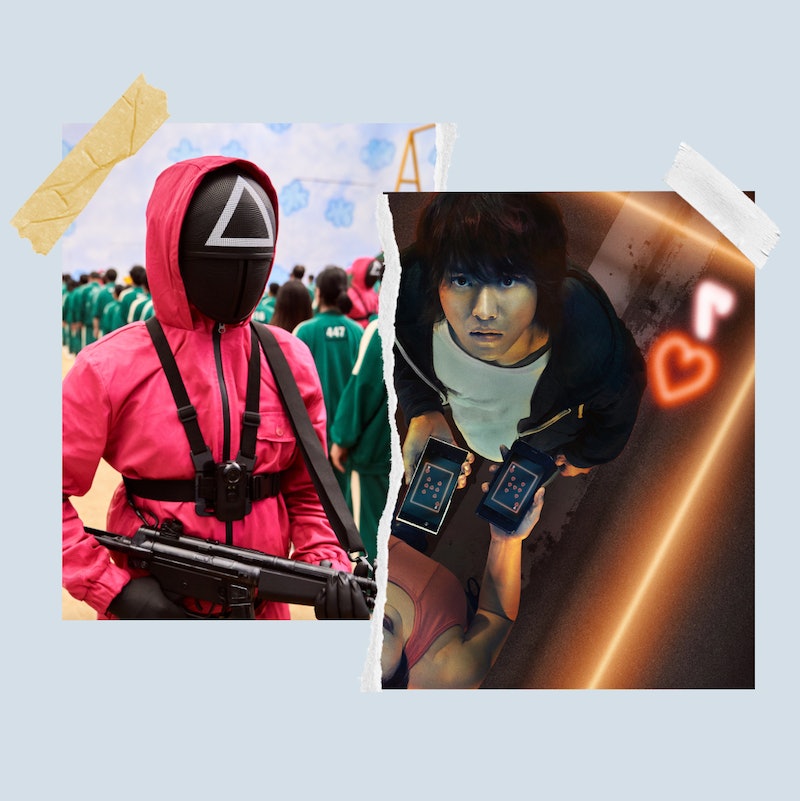 Squid Game has become a worldwide phenomenon. The violently entertaining Netflix series has reached No. 1 on Netflix’s Top 10 Today rankings in many countries, and now the show is the most-watched Netflix series of all-time ahead of previous titleholder Bridgerton. The Korean drama series focuses on hundreds people who are recruited to take part in children’s games to win a large sum of cash, but of course things aren’t that simple. It becomes apparent that while the games may be familiar, the stakes are much higher than when they were kids. It isn’t long before the body count begins, and then grows exponentially with each passing round of games. It’s truly a challenge for viewers to not binge it quickly in a day or two.

With just nine episodes out — and no official confirmation on a potential Season 2 even after that twist ending, the millions of people who have already finished Squid Game may be looking for something thematically similar to binge next. That’s where we come in to help you.

Here’s a handy list of TV shows and movies that may help satiate your desire for more blood.

Japanese sci-fi series Alice in Borderland has been experiencing a significant boom in views on Netflix for one very specific reason. Sure, Squid Game and Alice in Borderland are similar in tone and content, but countless people have started watching the latter because Netflix plays the series immediately after Squid Game ends. Because of this, Borderland has returned to the Top 10 on the platform’s trending chart in November 2021, months after premiering in December 2020. Netflix description of the show reads: “An aimless gamer and his two friends find themselves in a parallel Tokyo, where they’re forced to compete in a series of sadistic games to survive.”

Watch Alice in Borderland on Netflix.

Oscar winner Jennifer Lawrence was already on the rise in Hollywood by the time The Hunger Games came around, but the series made her a bonafide star and a household name. The first film was so successful, it spawned three sequels as well as an upcoming spinoff prequel film, The Ballad of Songbirds and Snakes. Based on a trilogy of books of the same name, The Hunger Games feature “tributes” fighting against one another to survive, with the whole thing being screened for the masses to watch. Set in a dystopian future, The Hunger Games still feels far-off from happening in real life, while Squid Game hits a little too close to home for comfort.

Find where to watch The Hunger Games on JustWatch.

Years after the fourth installment of the incredibly successful and influential horror film franchise was released, Scream made its way to the small screen. The show does differ from the movies, but it was similar enough to bring in a large audience, as the series ran for three seasons. First launching on MTV in 2015, the third batch of episodes concluded on sister network VH1 in 2019, but fans of Scream don’t have to wait much longer to see Ghostface again. Scream (the fifth film, not the original) hits theaters at some point in 2022.

Find where to watch Scream on JustWatch.

The only foreign-language movie to win Best Picture at the Oscars, Parasite is a must-see for film buffs, and especially those who don’t mind a bit of scare and gore. The South Korean production shares many of the same themes as Squid Game, as both are built around stories of people who are willing to go to troubling lengths for the money they need to better their lives. Parasite might not feature the same kill count as Squid Game, but it’s executed just as brilliantly.

Find where to watch Parasite on JustWatch.

Circle is a terrifyingly violent horror film that jumps right into its story, with several people losing their lives within minutes. In the movie, 50 strangers wake up and find themselves in a room, with no explanation of how they got there. It quickly becomes clear that if they move from where they stand, they die. If they attempt to leave the room, they die. Every two minutes, a countdown begins, and a machine chooses a person at random to die. Soon, the unwilling participants learn they can choose who goes next, and then the game really begins.

Find where to watch Circle on JustWatch.

If you’re up for more subtitles and you want horror mixed with game-based violence, Reality Z may be just what you’re looking for. Based on the British television miniseries Dead Set, the Brazilian production sees contestants on a Big Brother-esque program confined to their house after a zombie apocalypse occurs. The players are in danger, and they must find a way to fight back and stay alive, just as in Squid Game.

Find where to watch Reality Z on JustWatch.

One of the most successful horror film franchises of all time, Saw reinvigorated the genre back in 2004, and since then, a total of nine movies have been released, with a tenth in the works. Those characters unlucky enough to be featured in Saw must play very specific, often very gruesome games in order to survive the traps set by Jigsaw. Sometimes these people make it out alive, but usually only after going through something truly traumatic.

Find where to watch Saw on JustWatch.

A horror anthology series created in Canada, each season of Slasher features a new storyline, always centered on a masked serial killer picking off his victims for their own motive. The fourth and most recent season, titled Flesh & Blood, focused on a family that is forced to play twisted games in an effort to both stay alive and collect on the clan’s fortune. Each season can be binged on its own, but after starting one, you’ll want to tune in to all the stories.

Find where to watch Slasher on JustWatch.

The short synopsis for The Belko Experiment shows how it is similar to Squid Game, according to IMDB: “In a twisted social experiment, 80 Americans are locked in their high-rise corporate office in Bogota, Colombia, and ordered by an unknown voice coming from the company's intercom system to participate in a deadly game of kill or be killed.” Both productions feature large casts, with many people being murdered rather quickly. That alone puts them in the same category.

Find where to watch The Belko Experiment on JustWatch.

Find where to watch Hostel on JustWatch.

What started as a small horror flick has now become a full-fledged franchise, one which has also broken into the TV medium as well. In The Purge, America appears to be crime-free, but it’s only because everyone is allowed to do whatever they want during a 12-hour window once a year. That includes theft, arson, and, of course, murder. Surviving The Purge is no easy feat, and too many people succumb to the horrific urges of their neighbors in the five movies that have been released. A TV show of the same name aired on the USA Network for two seasons before being canceled.

Find where to watch The Purge on JustWatch.

When Squid Game first arrived, some fans of Japanese films and manga were quick to point out that it was strikingly similar to the movie As The Gods Will. Director and writer Hwang Dong-hyuk even had to address the claims of plagiarism, as some saw them as thematically too close to one another. While that discussion may be ongoing, those who love one will probably enjoy the other, as long as they don’t mind watching two projects that appear to share a storyline.

Find where to watch As The Gods Will on JustWatch.

More like this
The First Trailer For 'That '90s Show' Includes So Many Nods To The Original Series
By Jack Irvin, Alyssa Lapid and Grace Wehniainen
The ‘Emily In Paris’ Season 3 Trailer Teases Major Career & Love Crossroads For Emily
By Bustle Staff
Is Blake Lively Or Penn Badgley The Richest 'Gossip Girl' Star From The OG Series?
By Hugh McIntyre
Theo James Revealed The Truth About His 'White Lotus' Nude Scene & Fans Can't Cope
By Stephanie Topacio Long
Get Even More From Bustle — Sign Up For The Newsletter

This article was originally published on Sep. 29, 2021