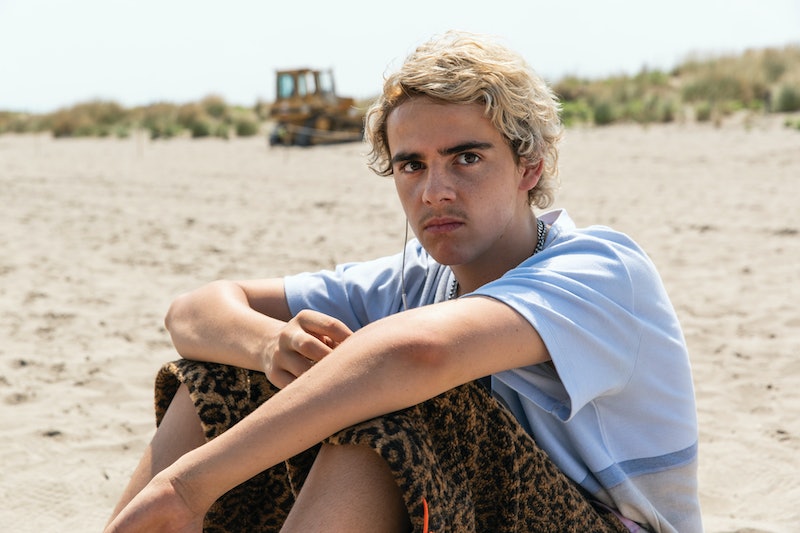 There’s not much plot to the series premiere of HBO’s We Are Who We Are, a bildungsroman set on an American military base in Italy from Call Me By Your Name director Luca Guadagnino. Its characters are guided by tides of emotion, their days determined by bus schedules, high school class schedules, the circadian rhythms of peacetime army life. Fourteen-year-old Fraser (Jack Dylan Grazer from the It series) has just landed at Venice Marco Polo Airport with his officer mother (Chloë Sevigny) and his other mother (Alice Braga), a Brazilian by birth. Their first stop is the lost and found to report his suitcase missing. Is there anything vital inside? Just everything Fraser cares about enough to fly over from New York City.

Fraser spends most of the episode wandering or searching the base, his new school, and his new city while the suitcase winds its way back to him via Amsterdam. Adolescence is the lost and found, we realize, as he tags along with a group of same-aged army brats, loses them at the beach, gets carelessly drunk in the punishing Italian sun, and struggles to find his way home at night. But the metaphor is not without nuance. The show’s adults haven’t solved the problem of being lost, but circumvented it. They live in a miniature America carved into Europe where they’ve exported everything they need to feel secure, from their hierarchies to the layout of their grocery stores, and faithfully reproduced them at bases across the globe. “They say they do it so we don’t get lost,” says Britney (Francesca Scorsese), a kid who should know: she’s spent her entire childhood in mini-Americas from Germany to South Korea.

We Are Who We Are belongs to its young cast, but what we do see of its adults’ military lives more closely resembles the overbearing strictures of US public school than the intoxicating laxity of Italy. Bored adults fill the bleachers for the “passing of the unit flag” ceremony, which sees control of the base formally transferred from General Mcaunty to Sevigny's Sarah, commanding her first garrison. No one wants to be there, but it’s tradition: This is what we do. When Mcaunty informs her of the base’s history of rape and suicide, he pairs it with a contemptuous “sweetheart.” When Fraser accidentally stumbles into a locker room of naked men, they taunt him for lingering. This, too, it seems, is what we do. At one point, Fraser observes to his Brazilian mother that Americans can only be “happy” in America. “This is America” is her sharp reply — an entire country succinctly reduced to a handful of unflattering metonyms: military bravado, aisles of pristinely stacked blue boxes of Kraft Macaroni & Cheese, and men who still bristle at handing the reins to a qualified woman. It’s the closest the episode comes to being political.

Otherwise, the base is so far just a backdrop, a place for Fraser to be young and twitchy and voracious. From the moment we meet him, he’s touching things: tugging on the ball chain of a window blind, flipping through pamphlets on the Veneto region, digging out the stars from a Stars and Stripes welcome cake thoughtfully prepared by a new neighbor with his hand. He goes through the world exercising a right to everything: taking photos of his peers when he thinks they’re not looking, stealing beer from the commissary, consuming things, maybe even commandeering them, without consequence. When his mother Sarah cuts her finger, he instinctively leaps to her and puts it in his mouth. It’s protective; it’s possessive. But later in the episode, drunk, he slaps her in the face as she tries to make him a snack. She hugs him.

“Do you feel lost?” Fraser asks Britney, the girl who taught him about the grocery stores. She says she doesn’t know, which perhaps means yes. Or maybe it means the question is unanswerable. Sarah is trying to command a base while being a mother and trying to mother her son without being commanding. Her wife is trying to be a soldier’s wife and her wife’s equal. In a separate storyline, high school freshman Caitlin (Jordan Kristine Seamón), who has caught Fraser’s attention, is experimenting with gender expression. Our characters are almost exclusively expats, marooned beyond their borders and trying to infuse the space with the solace of home; to take possession of some foreign piece of land and make it America. That everyone is searching and lost is a condition of their lives abroad, teens and adults alike.