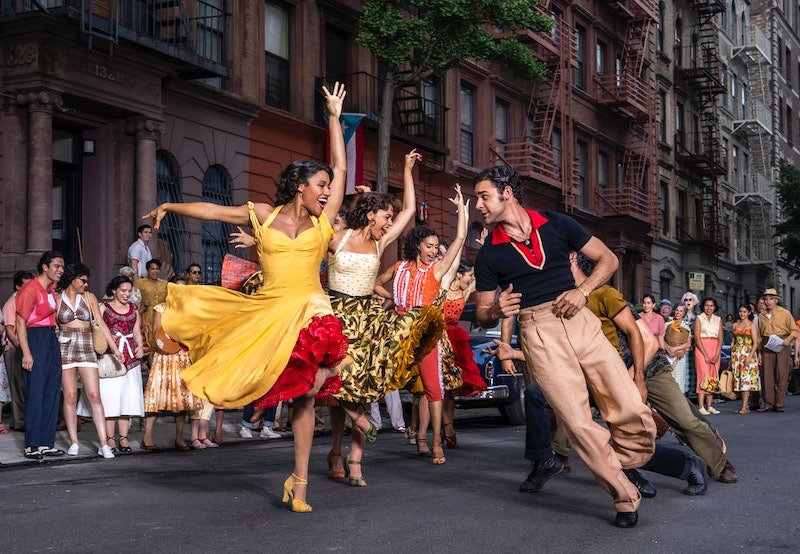 The results are in: Steven Spielberg’s new adaptation of West Side Story has critics raving. And in addition to praising the actors’ performances and the larger-than-life dance numbers, they’re also applauding how the decades-old story was updated for a modern audience.

While the new adaptation is mostly in line with its predecessors, there are some noticeable changes. Some differences between the new film and the classic movie from 1961 don’t require much explanation, like the decision to cast Latine actors instead of putting white (or even light-skinned Lantines) in brownface. But others are more nuanced and may need some context. Rachel Zegler, who plays María in Spielberg’s version, said in a recent interview with Bustle that she thinks these updates are long overdue. “[The 1961 film] will always live as an iconic piece of film history, but our film takes it a step further and in the right direction. There will always be remakes and re-imaginings of movies or musicals like this for years to come, and they will find different ways to represent for our people when they do,” Zegler said. “I’m so proud of the work we’ve done on this.”

Below, how the new West Side Story differs from the 1957 Broadway musical and 1961 film.

Something that’s never directly addressed in previous versions is the demolition of San Juan Hill — a neighborhood in Manhattan’s Upper West Side, primarily made up of Latine immigrants — to make room for Lincoln Center, Manhattan’s premier classical arts complex. Lincoln Center’s first finished theater, the Philharmonic Hall (now called the David Geffen Hall), didn’t open until 1962, which means construction was still well underway when the first West Side Story movie was filmed and released. The complex was officially finished in 1969.

Spielberg also decided not to use English subtitles when characters spoke Spanish. In an interview with IGN, Spielberg explained this decision, saying: “If I subtitled the Spanish I’d simply be doubling down on the English and giving English the power over the Spanish. This was not going to happen in this film, I needed to respect the language enough not to subtitle it.”

Rita Moreno’s new role hints at a familiar character and a beloved song.

The iconic Rita Moreno, who was the first Latina actor to win an Oscar for her performance as Anita in 1961’s West Side Story, plays a new part in the 2021 version. Her character Valentina, who owns the convenience store where Tony (Ansel Elgort) works, was written especially for Spielberg’s film — but that doesn’t mean she appears out of nowhere. Valentina replaces Doc, the shopkeeper who acts as the Jets’ voice of reason in the ’57 stage show and ’61 film. The new adaptation also hints that Valentina and her late husband, Doc, were in an interracial marriage — Doc was white, and Valentina herself is Puerto Rican. Not so coincidentally, the store Valentina manages is called “Doc’s.”

Many songs and dance sequences are revised and reordered, including “America.”

What is West Side Story without intricate choreography and catchy numbers? The 2021 film takes a few liberties with some of the musical’s most iconic song and dance sequences, but they all make sense in context.

In previous versions, Tony sings “Something’s Coming” with the inkling that something special is “around the corner,” meaning that something — or someone — will soon change his life. It’s also sung as a monologue, with no one else around. In the 2021 version, he sings it to Moreno’s character, Valentina, to signal his newfound hope. Having recently been released from prison for nearly killing someone — something that’s also new to the 2021 film — he’s is in the midst of reforming his former hoodlum ways, and “Something’s Coming” reflects that.

In the ’61 film, “America” takes place directly after a moonlit dance on the roof of Anita (Ariana DeBose) and Bernardo’s (David Alvarez) building. They bicker over their respective views about American life as an immigrant; Anita praises the opportunities their new country grants, while Bernardo isn’t as convinced. Spielberg’s version delays the number until the day after Tony and María meet at the dance at the gym, and uses sunny Upper West Side streets as its backdrop.

While the 2021 film is more faithful to the stage musical than its predecessor, it does make “America” a co-ed number, which was also done in the ’61 film. The ’57 musical only features Anita and the other Shark girls singing the tune. However, all three versions include those iconic ruffled skirts.

The song “Cool” gets a significant facelift. In the ’61 movie, “Cool” is performed following the deadly rumble that slays Riff (Mike Faist) and Bernardo. The Jets want to retaliate, but ultimately decide to “play it cool” until the hype dies down. However, in Spielberg’s film, “Cool” is performed by Riff and Tony before the rumble, as Tony tries to convince his friend to call off the standoff. The only thing the two versions have in common is the complex, exciting choreography.

The context surrounding the song “Gee, Officer Krupke,” which pokes fun at the eponymous cop, also changes. In the stage musical and first film, the song is sung in the streets of the Upper West Side. In the 2021 version, it’s sung in a police precinct as most of the Jets are brought in for questioning about the upcoming rumble.

It would be sacrilegious to cast Moreno and not give her a chance to flex her golden pipes, so she gets the “Somewhere” song credit. In the stage musical, “Somewhere” is sung by an off-stage performer during the “Somewhere Ballet,” a choreographed number that acts as a dream sequence for the two lovers. In the ’61 film, Tony and María sing the number together after the rumble. In Spielberg’s version, Valentina sings it alone in her shop as a plea for peace among the Sharks and Jets — and in the wider world.

Some characters’ backstories are altered or expanded.

If you’re wondering where María Vasquez got her new last name, it’s something Spielberg and screenwriter Tony Kushner added to their adaptation. Anita also forces Bernardo and María to speak English in their household to strengthen their fluency, something that’s glossed over in the two previous versions.

Additionally, the character of Anybodys was presented as a tomboy in previous versions. In the 2021 film, Anybodys (played by nonbinary actor Iris Menas) is a trans man.

More like this
The 'Hocus Pocus' Sequel Finally Has A Release Date & It Makes Total Sense
By Shannon Barbour and Radhika Menon
What Does Doctor Strange’s Third Eye Mean?
By Arya Roshanian
What’s New On Netflix: A Victoria Justice Rom-Com & The Return Of David Letterman
By Arya Roshanian
Lisa Marie Presley Reviewed Baz Luhrmann’s ‘Elvis’ Movie On Twitter
By Grace Wehniainen
Get Even More From Bustle — Sign Up For The Newsletter