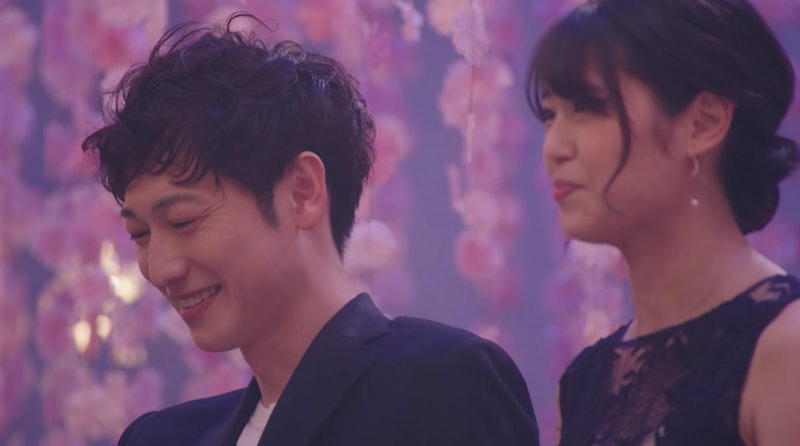 The Love is Blind universe continues to expand. Following the U.S. premiere in 2020 and a Brazilian spinoff in 2021, Netflix has now rolled out Love is Blind: Japan. The first batch of episodes ended in eight engaged couples being whisked off to a fancy hotel to test if their physical connection matched the emotional one they built without seeing each other in the pods. Among them are Minami and Mori, who bonded early on about their shared Korean heritage but began hitting snags after trying to transition their relationship to the real world. Here’s what to know.

Minami is a 27-year-old architect who knows exactly what she’s looking for in a man. Described as very blunt by Mori, she’s the woman who tells the hosts in the premiere episode that she needs to know how often a man reuses his towels before washing them. She made clear to Mori within their first few dates that she doesn’t want to be with a sexist man, and believes that housework, childcare, and paying rent are things that should be shared equally between partners. “I want to continue to develop my career,” she said. “I don’t think it’d be fair if I had to handle all that by myself.”

Mori is a 37-year-old cosmetic dermatologist who never really considered marriage, but was encouraged to apply for the show after seeing all of his friends find partners. He originally wanted to be a hairstylist, but became a doctor to help out his family. He later revealed that he’s thinking of working overseas in Africa or other parts of Asia, assumedly to help those who can’t normally afford treatments.

As for what he’s looking for in a wife, Mori wants someone who has her own opinions and aspirations, and who is both “flexible and adaptable.”

While Mori was initially torn between Minami and Ayano, Minami’s sincerity eventually won him over. He admitted in his confessionals that Minami says a lot of strange things, but said that only caused him to be more intrigued by her. The other men convinced him that Minami’s ability to openly expressing herself meant she was comfortable being vulnerable around him, and encouraged him to take the next step and propose.

After deliberating for a while, Mori send Minami a bouquet in Episode 4. He told her he likes how honest she is, and that even her “awkward word choices” are beautiful to him. The two then went to the bridge to finally meet in person.

Why did Minami and Mori break up?

While the pair initially appeared to feel at ease living with each other in the hotel, moving into an apartment together began to reveal their differences. While Mori seemed to wake up early, Minami slept in, causing him to note that she’s a “free spirit like a cat.” Conversely, Minami also seemed way more exacting than Mori initially thought, and he disliked how quick she was to shoot down his dreams.

Things seemed to really fall apart over — of all things — hair. When Minami brought up that Mori sheds a lot of hair and needs to keep it tidy, Mori got embarrassed, as he was using a product for hair growth. He cleaned it all up, but later told Minami that her blunt way of stating things could be hurtful. “Right now, I’m working on cleaning up my fallen hair. But I mean, hair falls out,” he told her.

They had a heart-to-heart and agreed to keep trying to make their relationship work, but that didn’t last for long. In Episode 8, Mori explained to the director of Love is Blind that Minami didn’t want to film that day. “She did her best to act like everything’s okay,” he said. “But after I thought it over, I realized she’s forcing it.” He concluded that it would be kinder to just end things. The two then met at a cafe to get closure before going their separate ways. “It’s not the happy ending we hoped for, but I feel like you brought out the best in me. So for my part, I have no regrets,” Mori told Minami.

What Are Minami and Mori doing now?

It’s hard to tell where Mori is toda,y as he doesn’t appear to have any social media handles, but given the fact that he was the one to initiate the breakup, it’s probably safe to say he’s doing fine. Minami also seems to be in good spirits based on her Instagram posts. She loves sharing her foodie adventures, and she recently went on a snow trip with friends. She also doesn’t seem to hold any ill will towards Mori or Love is Blind. “I had such a crazy and wonderful experience on this TV show,” she wrote in a Feb. 8 Instagram post. “I gave my 120 percent.”

More like this
'Love Is Blind: After The Altar' Season 3 Has A Release Date & It's Very Soon
By Grace Wehniainen
Everything To Know About A Potential 'Lockwood & Co.' Season 2
By Gretchen Smail
All The ’70s Easter Eggs You Missed In 'That ’90s Show'
By Grace Wehniainen
'The Crown' Season 6 Has Suspended Filming "Out Of Respect" For The Queen's Death
By Bustle Staff
Get Even More From Bustle — Sign Up For The Newsletter
From hair trends to relationship advice, our daily newsletter has everything you need to sound like a person who’s on TikTok, even if you aren’t.