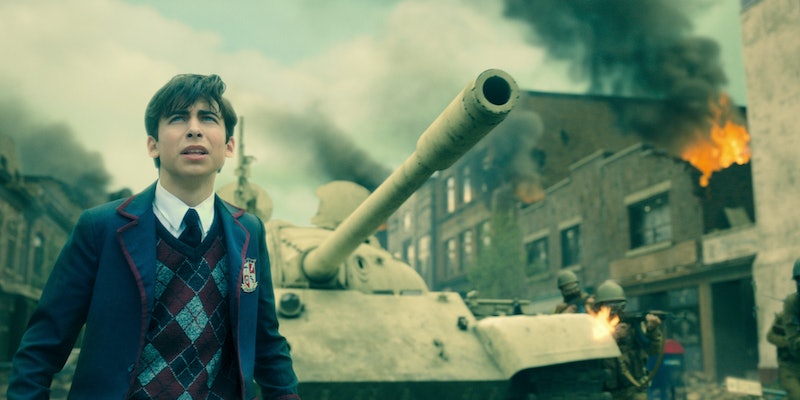 When we last saw Reginald Hargreeve's band of misfits, they were all squabbling over the best way to go about stopping the end of the world, an event Five witnessed firsthand. Due to a glass eyeball in the rubble, they were convinced that Harold Jenkins was the cause. Only too late did they discover that while Harold was the mastermind, Vanya was the instrument. Harold helped Vanya to remember that Hargreeves repressed her memories of her sonic wave abilities, which he deemed too dangerous and unstable to ever use. In a final confrontation at an opera house, Vanya nearly killed all her siblings before Allison stopped her with the sound of a gunshot. Vanya collapsed, but the built-up energy in her chest cut straight through the moon anyway, dooming the planet as the pieces fell to Earth.

Five rescues all of them, but not only does he jump way too far in Season 2, he also fails to keep them all together. As a result, a disoriented Vanya arrives alone in a Dallas alleyway. She stumbles out into the street and is immediately hit by a car. She forgets her name, her siblings, and the events that even caused the first apocalypse to begin with.

Vanya's amnesia — a play on how she gets amnesia in the comics after Five cruelly shoots her in the head — ends up playing a big role in the second apocalypse. Because she can't remember who she is, she's taken in by Sissy, the woman who hit her with her car. As Vanya cares for Sissy's autistic son Harlan, the two women fall in love and start an affair. Eventually, Sissy's abusive and homophobic husband Carl catches on. He drives Vanya out to a field and demands that she leave their family alone or he'll send Harlan to a mental institution.

Vanya rushes back home to tell Sissy, and they attempt to flee with Harlan. But they're stopped by state troopers, so Vanya reveals her powers. One of the cops manages to knock Vanya out, and she's taken into federal custody, where her confusion, lack of documentation, and mysterious powers immediately register as suspicious to the Communist-wary FBI. She can't tell them where she came from, but she has a Russian name and can speak perfect Russian thanks to Hargreeves' demanding education. Convinced she's a spy sent to assassinate President Kennedy, the FBI begins to torture her with shock therapy and LSD.

It's the combination of these things that causes Vanya to remember everything. Her trauma rises to the surface, and her powers kill the agents around her, leaving her strapped down as her powers spiral out of control. It's this, not the assassination of John F. Kennedy, that alters the course of history. Now fully the White Violin, Vanya destroys the FBI building just as JFK's motorcade drives past. The explosion spooks them, so JFK escapes unharmed. But America takes the explosion as an attack from the Soviet Union and bombs the Soviet-backed Cuba; in retaliation, the Soviet Union nukes Alaska. A nuclear world war is officially declared, and the planet is destroyed.

Thankfully, things don't actually unfold this way. The siblings rush to save Vanya, and in a final heartbreaking moment, Ben enters Vanya's mind and finds her curled up on the floor. He empathizes with her and encourages her to reign in the sonic shock waves. "Dad couldn't handle your anger. That doesn't mean you can't," he tells her. "You aren't alone at the table anymore, Vanya."

Vanya powers down, and with the apocalypse averted, Ben fades into the afterlife as Vanya holds him in her arms.

More like this
Does 'Locke & Key’s Ending Mean There Could Be A Season 4?
By Sophia Moore
‘Squid Game’ Creator Hwang Dong-Hyuk Just Dropped A Major Season 2 Tease
By Brian Anthony Hernandez and Bustle Editors
Everything To Know About Netflix’s 'Never Have I Ever' Season 4
By Jack Irvin and Gabrielle Bondi
The 'First Kill' Cast & Fans Are Disappointed Over The Show’s Cancellation
By Brad Witter and Sophia Moore
Get Even More From Bustle — Sign Up For The Newsletter