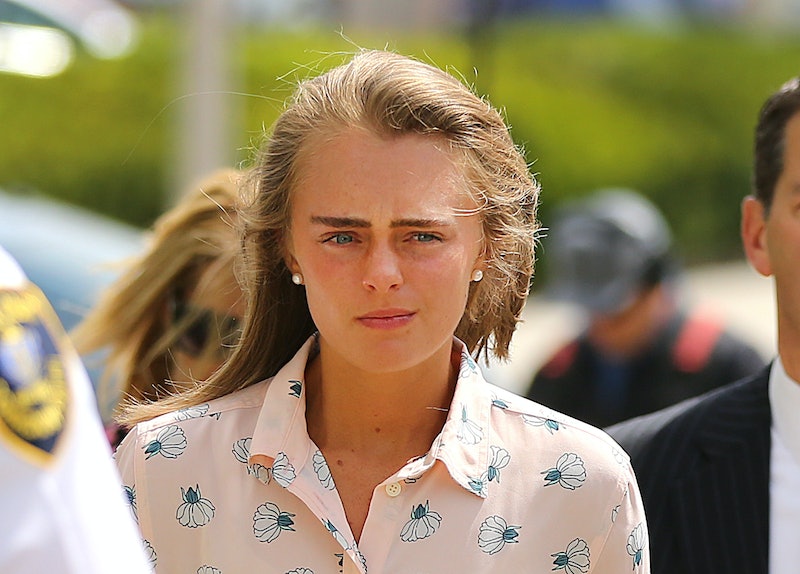 Hulu’s The Girl From Plainville dramatizes the high-profile case of Michelle Carter, who was charged with manslaughter for her role in the 2014 suicide of Massachusetts teen Conrad Roy. Following Roy’s death, investigators uncovered more than 300 pages of text messages from Carter, who repeatedly encouraged him to die by suicide in the weeks leading up to his death. Allegedly, Carter went as far as to berate him when he tried to give up on his final attempt, leading to the involuntary manslaughter charge. "I don't think that she helped him kill himself," Roy's aunt, Kim Bozzi, told ABC News’ 20/20 in 2017. "I think she forced him to kill himself."

In 2017, Carter waived the right to a jury and was sentenced by Massachusetts Judge Lawrence Moniz to 15 months served. (Roy’s family is currently pushing for legislation to criminalize suicide coercion with up to five years in prison.) “Carter’s actions and also her failure to act where she had a self-created duty to Mr. Roy, since she had put him in that toxic environment, constituted each and all wanton and reckless conduct,” Moniz said in 2017 while announcing her conviction, per People. “She [instructed] Mr. Roy to get back into the truck, well-knowing of all of the feelings that he [had] exchanged with her: his ambiguities, his fears, his concerns.” The judge added that it was concerning that Carter “did nothing” after Roy called her during his suicide attempt; records show they talked on the phone for more than 40 minutes. “She did not call the police or Mr. Roy’s family. Finally, she did not issue a simple additional instruction [to Roy]: ‘Get out of the truck,’” Moniz said.

In January 2020, Carter was released early from Bristol County House of Correction for good behavior after serving about 11 months. “Ms. Carter has been a model inmate in Bristol County,” Jonathan Darling, a spokesperson for the Bristol County Sheriff’s Office, said in the statement, per Buzzfeed. “She has attended programs, had a job inside the jail, has been polite to our staff and volunteers, has gotten along with other inmates, and we’ve had no discipline issues with her whatsoever.”

Now 25, Carter has kept a low profile since her release. On April 8, the New York Post reported that she was spotted doing yard work on her front lawn, but she’s otherwise remained out of the public eye. She has not spoken publicly since her sentencing, but her lawyer Joseph Cataldo previously told People that Carter “very much regrets” her actions. She’s currently serving a five year probation.

Neither the Carter nor Roy family had any involvement with the Hulu limited series. Carter has not publicly commented on the show, and it’s unclear whether she’s watched it. In a 20/20 special on April 8, Cataldo said that Carter is "remorseful over the situation,” adding that she has “come to grips with it. She understands.”