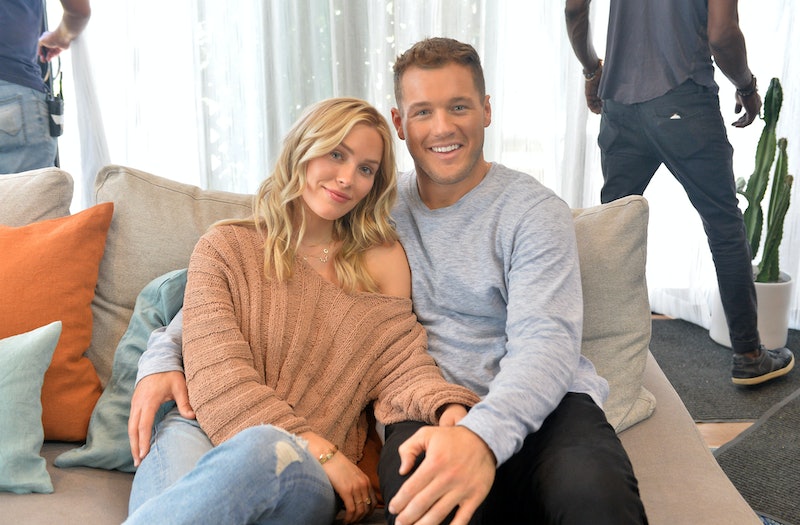 When Bachelor couple Colton Underwood and Cassie Randolph broke up in May 2020, it initially seemed amicable. “Colton and I have broken up, but have decided to remain a part of each others lives,” Cassie wrote in a statement on Instagram. “I love Colton very much and have an enormous amount of respect for him.”

But it didn’t take long for things to turn ugly. When Cassie discussed the split on The Bachelor — The Greatest Seasons Ever! less than two months later, Colton to lashed out at his ex on social media. “When our relationship ended we agreed to handle things as privately as possible as we attempted to navigate our new relationship as friends,” he wrote on Instagram in July 2020. “I chose to do that since we were living in this interim period, but obviously a lot changed this week.”

Cassie fired back, accusing Colton of making subtle yet “aggressive comments” to make her look “like the bad one.” She also claimed Colton was trying to “monetize” their breakup by writing a new chapter of his book — The First Time: Finding Myself and Looking for Love on Reality TV, which was released in March 2020 — and refusing to give her “any sort of approval.”

In the eventual chapter — which was released in January 2021 — Colton explained the events that led he and Cassie to part ways. He said that Cassie had “felt there was pressure on her to commit one way or the other” while competing on his season of The Bachelor, which ended with them choosing to be together but not get engaged after he dramatically jumped a fence to chase after her. Despite trying “to give her space,” Colton said that he felt Cassie never understood who she was or where her hesitation was coming from.

In September 2020, the two’s feud went from bad to worse when Cassie sought a restraining order against Colton, citing the Domestic Violence Prevention Act. In court documents obtained by Us Weekly, she alleged that her ex was “stalking and harassing her,” sending “unsettling text messages,” and had placed “a tracking device on her vehicle.” Cassie, who listed a split date of mid-April 2020, also claimed that Colton took “obsessive” walks by her Huntington Beach, California home as well as the homes of her family and friends. A judge ultimately ordered Colton to stay at least 100 yards away from Cassie and not make “contact, either directly or indirectly, in any way” with her.

However, Cassie asked the court to dismiss the temporary restraining order prior to their November 2020 court date. “The two of us were able to reach a private agreement to address any of Cassie’s concerns,” Colton said in a statement to People at the time. “I do not believe Cassie did anything wrong in filing for the restraining orders and also believe she acted in good faith.”

When Colton publicly came out as gay on Good Morning America the following April, he apologized to Cassie. "I loved everything about her, and it’s hard for me to articulate exactly what my emotions were in going through that relationship with her was because I obviously had an internal fight going on,” he said at the time. “I would just say that I’m sorry from the bottom of my heart.” In another April interview on ABC’s Nightline, Colton said he’d like to “get the chance to sit down and talk with” Cassie, though he didn’t know if it would ever happen.

“I made mistakes in the end of that relationship. And I ruined the good memories we had by my actions and what I did to hold on to being straight, because I didn’t want to look myself in the mirror,” he said. “So for that, I’m extremely, extremely sorry.”

Cassie has not directly commented about Colton’s sexuality, but a source close to her told People in April that she “found out Colton is gay the same time that everyone else did” and was “still processing it.” Even so, the insider noted that Cassie believes in forgiveness and has “moved on with her life.”

More like this
Love Is Blind’s Natalie Claims Shayne Signed Up For 'Perfect Match' While They Were “Still Together”
By Brad Witter
10 Photos Of The Wildest Limo Arrivals From 'The Bachelor' Premiere
By Brad Witter
Airris From 'MAFS' Says He Doesn’t Regret Going To Decision Day With Jasmine
By Brad Witter
Shaq Might've Spoiled His Relationship Status With Kirsten After 'MAFS'
By Brad Witter
Get Even More From Bustle — Sign Up For The Newsletter
From hair trends to relationship advice, our daily newsletter has everything you need to sound like a person who’s on TikTok, even if you aren’t.