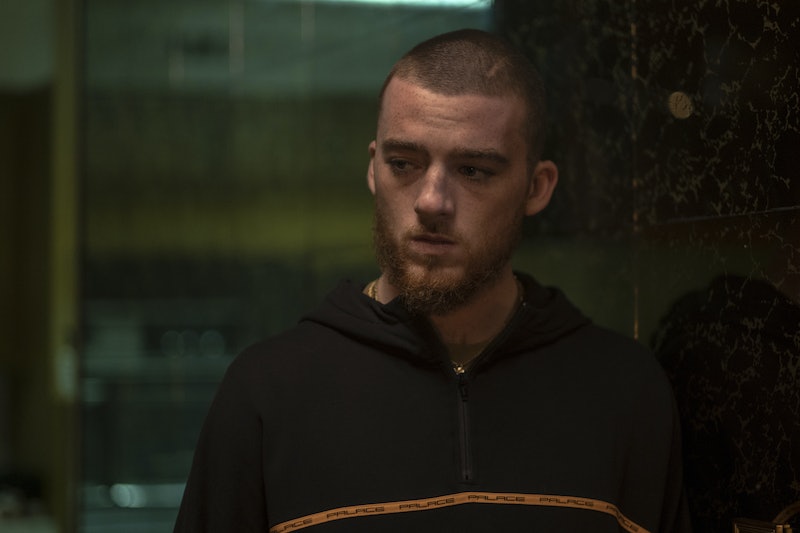 Spoilers ahead for the Season 1 finale of Euphoria. Euphoria’s first season ended with as much of a bang as it began, leaving the fates of multiple characters up in the air. Not only did Rue (Zendaya) relapse after Jules (Hunter Schaefer) left town without her, Fezco (Angus Cloud) found himself at odds with Nate (Jacob Elordi) and in danger.

Fez initially won fans over as the drug dealer with a heart of gold, doing his best to protect Rue even as she bought drugs from him. In the season's penultimate episode, Rue asked Fez to threaten Nate in order to stop him from blackmailing and harassing Jules. In response, Nate called the cops on Fez and his brother, Ashtray (Javon Walton), who were forced to flush their supply in a panic. This led to a brand new problem for Fez: he owed money to his boss, Mouse, but no longer had a way to pay him back.

In the Season 1 finale, Fez got desperate and robbed a man's house in order to get the money he needed. When the homeowner confronted him, Fez beat the man within an inch of his life in order to get the cash and make a clean getaway. The violent lengths he went to didn't go unnoticed by Mouse, who stood up to confront Fez in the last minutes of the episode, gun in hand.

Needless to say, the implication that something terrible could have happened to Fez left social media in a panic. “i just watched the euphoria finale and ... someone tell me fez is alive im shook,” wrote one viewer. Added another, a bit more emphatically: “SEASON TWO BETTER START WITH US SEEING THAT FEZ IS OKAY. I DONT CARE IF HE’S IN JAIL I JUST DONT WANT HIM DEAD.”

Because Euphoria didn't show anything more of the confrontation, it’s possible that Mouse shot Fez. This is a show that doesn't shy away from the darkness of life — the plot picks up following Rue's overdose and stint in rehab — so it wouldn't be out of the question for Euphoria to kill off one of its most beloved characters.

There's also the fact that Fez, who viewers have learned lives by some kind of moral code, crossed a line when he chose the house he robbed. The homeowner was a wealthy doctor who had connections to Mouse, which could cause the supplier to seek revenge. In addition, Fez (perhaps unknowingly) traumatized the doctor's son, as he was hiding in the hallway watching the fight, and Mouse could be upset about Fez either terrorizing the family or leaving a witness.

If Fez does manage to make it into Season 2 alive, it seems likely that the character fans know and love will have been changed drastically by the events of the finale. Maybe he'll get arrested and be serving time for the robbery and attack in Season 2, maybe he'll be in hiding to avoid the police, or maybe he'll just be forced to reevaluate his sense of morality and head down a darker path.