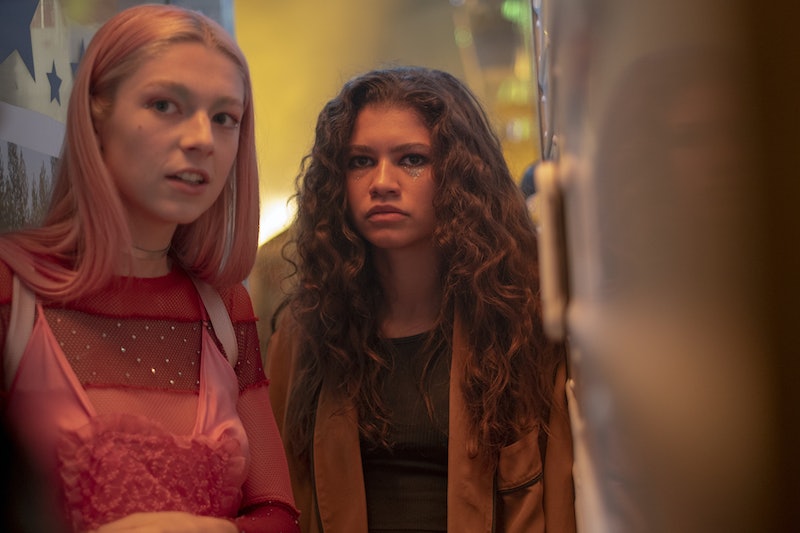 Since the Euphoria Season 1 finale aired in August 2019, fans have gotten to enjoy watching Zendaya win a Best Actress Emmy for her performance as Rue as well as two standalone “bridge” episodes featuring her and Jules. But while those were nice holdovers, viewers are understandably ready for more episodes after waiting more than two years. Now, that time has finally arrived. Ahead of Season 2’s premiere on Jan. 9, remind yourself where we last left Rue and the gang with this Euphoria Season 1 recap.

When Euphoria begins, Rue is returning to home and school after a stint in rehab. She immediately goes to buy drugs from her dealer, Fezco, passes a drug test by using her childhood friend Lexi's urine, and soon meets the new girl in town, Jules. Rue and Jules strike up an instant connection, which straddles the line between friendship and romance. Rue is often insecure in her feelings for Jules, which is made worse by her sponsor Ali's belief that the relationship won't last.

It's revealed that Rue first began misusing drugs when she tried her father's oxycodone while he was dying of cancer. In addition to her struggles with harmful substance use, Rue also suffers from severe depression; during one particularly bad depressive episode, she gets a kidney infection when she can't even get herself out of bed to pee.

In the Season 1 finale, Rue suggests to Jules that they leave town and run away together. Although Jules goes to the train station, Rue can't bring herself to follow through on her own impulsive idea. In the mystifying final sequence, Rue relapses and experiences a vivid hallucination of a musical performance.

In her standalone bridge episode, “Trouble Don’t Last Always,” Rue met with her sponsor Ali at a diner on Christmas Eve following her relapse. Rue blames her relapse on the fact that Jules “abandoned” her at the train station, but Ali confronts Rue with the fact that she had never intended to stay sober, and that it was unfair to blame Jules when she and Rue had never defined their relationship in the first place. Rue admits to having suicidal thoughts, and Ali tries to reinforce the idea that forgiving herself is the first step in getting better.

One of the first things Jules does when arriving in town is hook up with an older gentleman before attending a party where she's harassed by Nate, a local jock and bully. She puts a swift end to Nate's harassment by slashing her own arm with a knife, intimidating everyone except for Rue. Soon afterward, Jules strikes up an online flirtation with a boy named Tyler and agrees to meet him at the impending carnival. While there, Jules realizes that the man she hooked up with is Cal, Nate's father. Additionally, it turns out that "Tyler" is none other than Nate himself, who is now using the nude pictures that Jules sent him to bribe her into being quiet about his father.

Later in the season, Jules goes to visit a friend from her hometown, where she meets the flirtatious Anna. While having sex with her, Jules hallucinates about both Nate and Rue. When she returns home, Jules admits to Rue that she thinks she's in love with both her and Anna. When Rue asks Jules to run away with her, Jules agrees… but when Rue doesn't show up at the station, Jules boards the train and leaves town anyway.

In her standalone bridge episode, “F*ck Anyone Who’s Not a Sea Blob,” Jules meets with a therapist following her return to town. She admits that she resents Rue for placing the responsibility of her sobriety on her shoulders, and opens up about her mother’s own struggles with alcohol misuse. She eventually comes to the conclusion that she wants to go off of her hormone treatment, since she has always defined her idea of femininity by what men desire. At home, Rue stops by and Jules attempts to apologize for leaving her at the train station, but Rue simply wishes her a Merry Christmas before leaving to meet Ali at the diner.

When Nate was 11, he discovered videos his father Cal kept in his office of himself having sex with underage trans women and gay men. That discovery led to an understandably complicated relationship with his father and severe anger issues for Nate. After seeing his on-again, off-again girlfriend Maddy hook up with a boy named Tyler in a pool to make him jealous, Nate breaks into Tyler's apartment and beats him up, accusing him of sexually assaulting her.

After Nate wins the last football game of his high school career, Cal criticizes his son's performance rather than praising him — and is shocked when Nate reacts by violently hitting himself repeatedly. When Rue confronts Nate about his blackmailing of Jules and the truth about his father, Nate quickly cuts her down by leveraging her insecurity over her relationship with Jules, resulting in Rue backing out of their getaway plan.

Maddy has a toxic relationship with Nate. She's confused when she finds dick pics on his phone (which he was using to catfish Jules); when she confronts him about it, he violently chokes her. When her mother discovers the bruises on her neck, Maddy tries to protect Nate, but her mom gets the police involved and presses charges anyway. In order to protect himself, Nate returns to Tyler and threatens him into confessing to having choked Maddy. He also uses his leverage over Jules to force her to corroborate this story.

When Nate is unable to maintain an erection with her, Maddy questions his sexuality, and he once again gets violent with her. Searching for answers, Maddy snoops around Nate's room while he's in the shower and finds a video. Watching it later, she's horrified to see it's the film of Cal having sex with Jules.

When Rue's childhood friend Lexi and her older sister Cassie were young, their father was in a terrible car accident, and his recovery led to him misusing drugs. After their parents separated, Cassie caught her father breaking into their house to steal things to pay for his drugs, and she covered for him. This early experience led to a series of unhealthy relationships with men, including her current dysfunctional romance with college freshman McKay. McKay frequently slut shames Cassie and refuses to publicly acknowledge her as his girlfriend.

After she goes to a college party with McKay and witnesses him being hazed, he takes his anger out on Cassie by having aggressive sex with her. When she discovers she's pregnant, McKay instantly suggests that she shouldn't keep the baby. In the finale, Cassie goes to a clinic with her surprisingly supportive mother and terminates the pregnancy.

After a video of Kat losing her virginity at a party is leaked and goes viral, Kat is inspired to take agency over her sexuality and becomes a cam girl, streaming videos of herself to men in exchange for money and expensive gifts. Meanwhile, she strikes up a tentative relationship with a quiet loner named Ethan. Though she continues to have sex with other boys, she lashes out in jealousy when she sees him chatting with another girl. Eventually, an interaction with a client makes her uncomfortable enough to stop camming; she apologizes for her behavior to Ethan at the winter formal, and they reconcile.