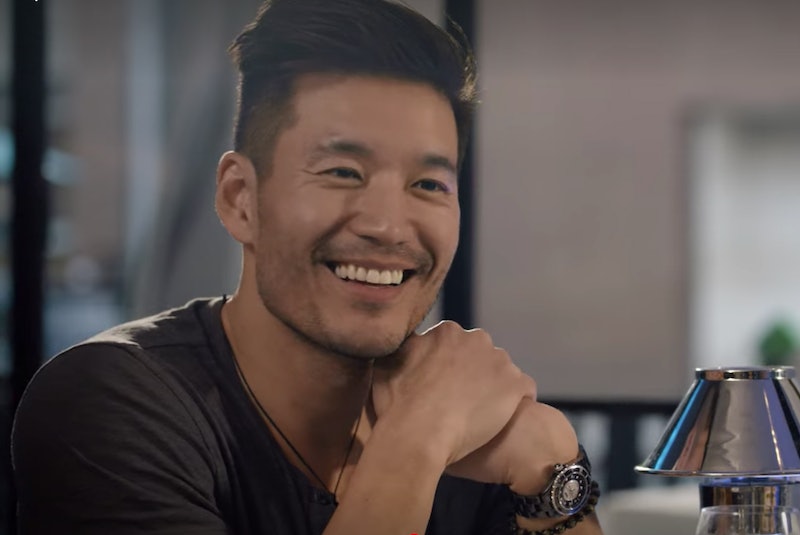 Bling Empire's Kevin Kreider may not be wealthy like the rest of the castmembers, but he certainly brings a lot of heart to the show. An up-and-coming model and relative newcomer to upper crust LA, Kevin's Season 1 storyline mainly revolved around his relationships to his heritage and his love life. There were certainly a lot of ups and downs, but after filming Bling Empire, Kevin still sees the experience as a net positive. In particular, he tells Bustle that the show helped him get closer to his adoptive mom.

Kevin was born in Korea and grew up in Philadelphia, and Bling Empire follows him as he takes a DNA test — which confirms he's predominantly Korean and Japanese — and embarks on a journey to find his birth parents. Unfortunately, he's not able to get very far, and an emotional session with a therapist (who uses hypnotism) leads Kevin to believe that his mother was unprepared or unwilling to have him. "It's been really tough because the [adoption] center [I emailed] said that you need to know the [parents'] serial number," which needs to be obtained through the Korean government, he explains. Because of those hurdles, he thought that perhaps if he participated in Bling Empire, maybe somebody related to him in Korea would "reach out, if they know anything."

Kevin's journey to find his birth parents is still ongoing, but in the meantime, the search has helped him reconnect with his adoptive mom, who appeared on the show. "We've gotten closer," he says. "I talk her way more than I used to. I used to talk to her maybe once every other week, [but] now we talk almost like every three days."

In contrast, Kevin admits he's not had as much success when it comes to romance. Bling Empire showed Kevin's attempts to woo fellow castmate Kelly Mi Li, who's in a tumultuous relationship with actor boyfriend Andrew Gray. Kevin took Kelly on a salsa date during one of her breaks with Andrew, but Kevin admits the date was just "awkward," and he could tell she was hiding something. They had already been friends for a while, but "when I tried to make a move it just felt very weird," he says. "I kind of got the clue after multiple times of trying; I guess I'm a slow learner in that sense, but it just felt more and more awkward the more I tried to get closer. She was like a force field just repelling me."

Their romance fizzled out before it even began, but Kevin says they still text. "She's very responsive if I need to call her or talk to her about stuff," he says. "It's a good platonic relationship now."

At the end of Bling Empire there was also a possibly romantic moment between Kevin and castmate and DJ Kim Lee. While they initially fought over the penis pump debacle, they later bonded over their family issues. Kevin ended up going to Florida with Kane in an attempt to track down Kim's real father, who they discovered died a few years earlier. Kevin says the moment he had with Kim after telling her about her father was "real and genuine," but making a move when she was "at this really vulnerable time" felt wrong. "I didn't want to ruin our friendship, or what friendship could happen," he says.

As for his career, Kevin says that he's looking to transition into acting. "I'd love to play leading male roles," he says, adding that he's most interested in stories about "finding my place in the world as an Asian American" and has been working on projects along those lines. Ultimately, he knows that he can't just "wait for Hollywood to make it or write it for me."