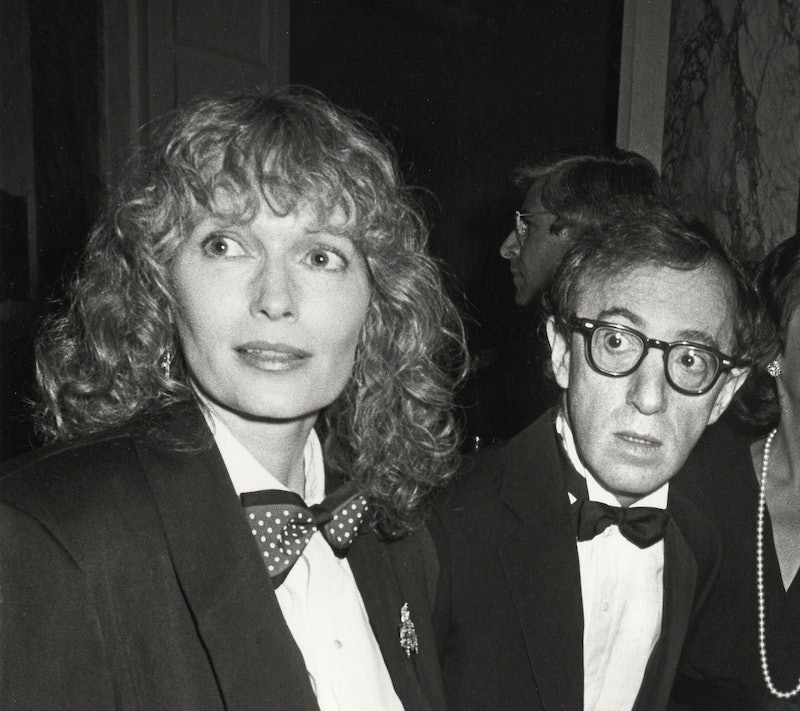 Though HBO's Allen v. Farrow focuses primarily on Dylan Farrow's claim that Woody Allen sexually assaulted her when she was 7, the docuseries also explores her adoptive mother Mia Farrow's relationship with the famed director. (Allen has repeatedly denied Dylan's allegation.) The two met in 1979 and dated for 13 years, until it was revealed that Allen had struck up an affair with Mia's other adopted daughter, then-21-year-old Soon-Yi Previn.

Because of both Dylan's claims and the scandal with Previn, Mia and Allen's romantic relationship became public spectacle. But the two also collaborated professionally, with Mia starring in 13 of Allen's films throughout their relationship.

The daughter of writer-director John Farrow, Mia rose to prominence in 1964 at 19 years old when she starred in Peyton Place, TV's first primetime soap opera. She became a household name when she played the lead in the 1968 horror film Rosemary's Baby, and then Daisy Buchanan in 1974's Great Gatsby. By the time she met Allen, Mia had starred in 20 projects.

Once she got involved with Allen, however, her career seemingly began to revolve around him and ultimately dwindled after their breakup. (Per Vanity Fair, Allen reportedly paid Mia only $200,000 for each of the films she starred in.)

Here's a breakdown of all the movies they worked on together, many of which featured messy love triangles (or squares) as well as older men dating much younger women.

Mia and Allen first collaborated on A Midsummer Night's Sex Comedy, which follows philosopher Leopold (Allen) and his much younger fiancée, Ariel (Mia), as they spend a weekend at a summer house with several other couples. Over the course of the weekend, everyone ends up hooking up with someone different than who they arrived with. Ariel is portrayed as the more promiscuous one compared to Leopold.

Zelig is a mockumentary film about Leonard Zelig (Allen), a nondescript man who has such a desire to fit in that he takes on the characteristics of those around him. Mia plays the psychiatrist who tries to help him, and the two fall in love.

Danny Rose (Allen) is dragged into a dangerous love triangle when he realizes the woman he's having an affair with, Tina (Mia), is the ex of a gangster. Tina is portrayed as conniving, but Danny forgives her in the end.

Set during the Great Depression in New Jersey in 1935, the film follows Cecilia (Mia) as she's rescued from an abusive marriage by a character who walks out of a movie screen. Cecilia ends up in a love triangle with the character and the real actor who plays him.

This one is yet another love triangle film, but this time set within a single family. Hannah and Her Sisters follows Hannah (Mia) and her husband Elliot, who's in love with Hannah's sister, Lee. Meanwhile, Hannah's ex-husband Mickey (Allen) rekindles a relationship with Hannah's sister Holly.

This one is, you guessed it, another convoluted love square. Mia plays the main protagonist Lane, who moves to her country house with her best friend Stephanie after a suicide attempt. Their neighbor Howard falls in love with Lane...who's in a relationship with Peter...who falls for Stephanie...who's married with children.

Facing a mid-life crisis, Marion Post (Gena Rowlands) rents an apartment next to a psychiatrist's office to write a new book. After accidentally overhearing about the despair of one of the patients, Hope (Mia), Marion begins to reflect on her own shortcomings and struggles.

In Crimes and Misdemeanors, an ophthalmologist's mistress threatens to reveal their affair to his wife. Meanwhile, a married documentary filmmaker (Allen) falls in love with another woman, Mia's associate producer character.

Alice is a loose reworking of a film by Federico Fellini, who Allen idolized according to Christina Englehardt. Mia plays Alice Tate, a spoiled Manhattan housewife who visits a Chinatown healer and admits she was only attracted to her husband for his money. She later falls in love with Joe, a jazz musician, and has to choose between Joe and her husband.

With a serial strangler on the loose, bookkeeper Kleinman (Allen) wanders around town searching for the vigilante group intent on catching the killer. Mia plays Irmy, a circus performer who cheats on her boyfriend at a brothel.

Husbands and Wives is the last film Farrow and Allen did together, and she finished work on it even after finding out about Allen and Previn's relationship in January 1992. Fittingly, the film follows professor Gabe (Allen) and his wife Judy (Mia) as they reevaluate their own relationship in the wake of their friends separating. While the other couple eventually gets back together, Gabe and Judy's relationship ends.

Gabe then falls for his 21-year old student, but declines to pursue it further because he can't get over how he ruined what he had with Judy. The film ends with Gabe living alone and a quick cut to black, where Gabe asks the unseen crew, "Can I go? Is this over?"