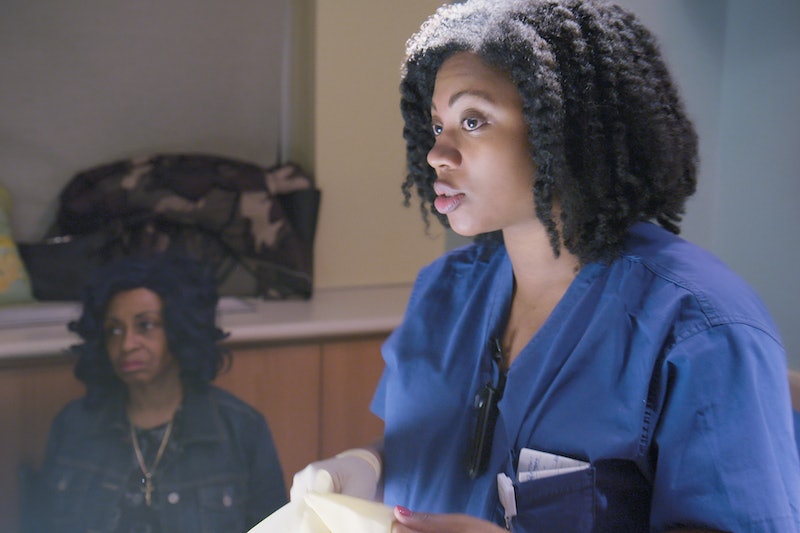 Netflix's new docuseries Lenox Hill brings us inside the halls of New York's Lenox Hill hospital, where Amanda Little-Richardson is finishing up her OBGYN residency while navigating her first pregnancy. The season ends just as she's packing up her New York apartment to move to California, where she tells Bustle she and her family have now settled in quite nicely.

"I love New York, and the East Coast will always have a truly special place in my heart," Little-Richardson says. "But my husband had followed me, kind of left his dream job in California, and we've been long distance, really, for the majority of our marriage. So I think it was time for me now to follow him."

During the show, Little-Richardson and her husband were given difficult news about their daughter: she would be born with Noonan Syndrome, a rare condition that could cause short stature, hearing loss, and other complications. Not having the baby was never a consideration for the couple, and Little-Richardson says her daughter is now doing very well.

She adds that she was lucky to have her husband and parents there for her delivery despite going into labor early. "When I first broke my water, it was kind of my greatest fear. I was by myself. My husband was still in California. My parents were still in North Carolina," she says. "Nothing was going according to plan. But we had the resources and ability and everyone was there within 12 hours."

Little-Richardson's parents have since moved nearby to San Jose, California, and she's now able to spend a lot more time with them. "I just work one night shift now, so I have so much more free time on weekends," she says happily. "We're really enjoying the time together as a family."

Since Little-Richardson filmed Lenox Hill, the world has been hit hard by both the COVID-19 pandemic and the recent protests against systemic racism and police brutality. Little-Richardson's work as an obstetrician hasn't been heavily impacted by coronavirus, but she spoke on the show about the challenges Black women face during pregnancy and "completely supports the [Black Lives Matter] protesters, what they're advocating for, and the change we need in America."

Ultimately, empathy and kindness are central to Little-Richardson's life and practice. "I hope that [Lenox Hill] really highlights the passion and compassion that physicians have towards our patients, that we truly do care about them," she says. "My goal is that this series will improve the patient-physician bond and trust. I think that's so important."

More like this
Everything To Know About The Sandman Season 2
By Kadin Burnett
What’s New On Netflix: 'Bridget Jones’s Diary' & 'Monster-in-Law'
By Arya Roshanian
What’s New On Netflix: Neil Patrick Harris’ Queer Rom-Com Series & More
By Arya Roshanian
One Of 'Selling Sunset's New Cast Members Just Had A Baby With Nick Cannon
By Orla Pentelow and Brad Witter
Get Even More From Bustle — Sign Up For The Newsletter