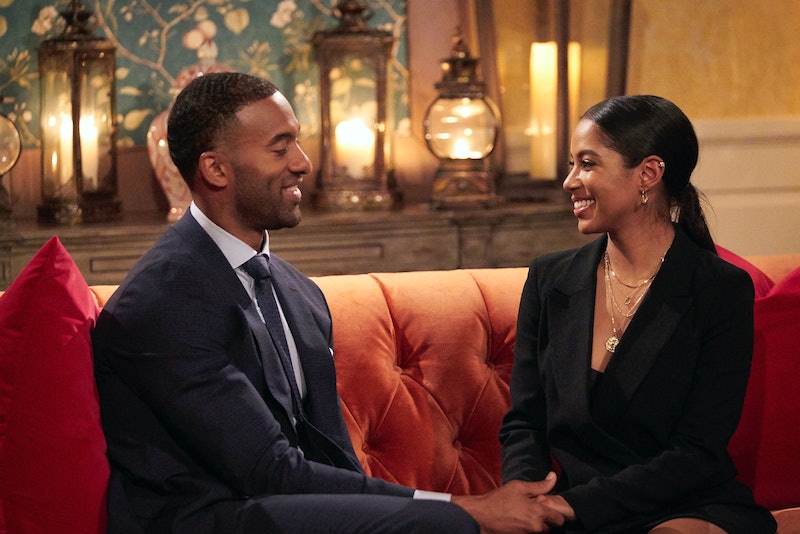 During the Feb. 15 episode of The Bachelor, Bri Springs revealed that she'd quit her job to be on the show. "I knew that was a decision I was going to have to make, but after weighing what this journey could mean for me, to give me that opportunity to find love with someone, with you specifically, I thought it was worth it," she explained to Matt.

Now, however, it seems like Bri has some regrets. After the episode, she posted an Instagram story seemingly shading Matt. "Me on the phone trying to get my job back," she wrote alongside a photo of herself on the phone while in a bikini in a pool.

This appears to suggest Bri doesn't end up with Matt, though she has at least been enjoying her newfound free time. It looks like she's on vacation in most of the photos she's posted on Instagram since filming for Matt's season wrapped. In early January, she went snowmobiling, and she's shared numerous beach pics from tropical locations. (When she posted a photo of her and some friends from one trip, several fans commented that they were upset she was traveling during the pandemic.)

But it hasn't been all fun and sun for Bri since leaving The Bachelor. After Chris Harrison defended contestant Rachel Kirkconnell's past racist actions during an Extra interview with Rachel Lindsay, Bri released a joint statement with several of her fellow contestants standing by Lindsay and denouncing any defense of racism. (Chris Harrison has since apologized and stepped down indefinitely from hosting the show. Kirkconnell also released an apology.)

How the rest of Bri's Bachelor journey will play out, we'll have to wait and see. But it's a good bet that she won't be quitting any more jobs for men (or reality TV).