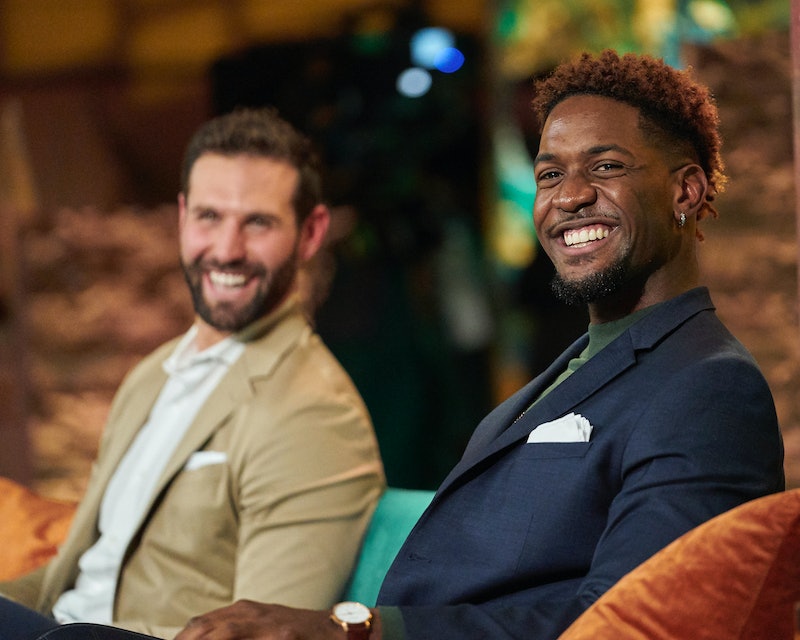 After (sort of) parachuting his way onto The Bachelorette, Demar Jackson certainly made a big first impression on Clare Crawley and viewers. Later, as one of the men who remained on the show after Tayshia Adams eventually replaced Clare, the original cast member continued to be a favorite despite a lack of screen time. Because Tayshia eliminated him in the Dec. 8 episode, it's time to dive into what Demar has been doing since leaving La Quinta Resort.

Luckily, he'll be one of the few contestants present at the Dec. 14 Men Tell All special, and one thing Bachelor Nation can expect is for him to have plenty of positive things to say. Following his elimination episode, Demar posted on Instagram that he woke up "feeling ultimately thankful and blessed to have had the opportunity of a lifetime" on the show. "Never in my wildest dreams would I have imagined putting myself, my emotions, and my challenges out there to this degree for the world to see, week after week," he captioned the Dec. 9 post, adding he appreciates the support he's gotten from everyone, "especially Tayshia."

He's also taken his elimination in stride, using his time on the ABC series as a launchpad for several comical TikTok videos. In one, he impersonated some of his fellow contestants, joking about how hard it can be to get attention on The Bachelorette. In another, he even poked fun at getting sent home, using a rose ceremony after-party at "Club Rosé" as the setup. Demar also made a noble attempt at re-creating the magic of the original "Mocha Latte" song he performed for Tayshia.

Demar is still a program director and spin instructor at Scottsdale, Arizona's The Madison indoor cycling studio. There, he's known as DJ Jackson. His 45-minute classes are described as a "party on a bike" and are more of a dance party than a spin class. The facility even features a state of the art sound system, DJ booth, and laser shows, per the Madison Scottsdale website. Special upcoming classes include "Merry Drakemas" and Migos-themed rides. With a job that entertaining, you can see why Demar is always smiling.

As far as whether or not Demar's dating anyone new since Tayshia sent him home, he hasn't shared any relationship updates on social media. If nothing else, his seemingly single status could make him a strong contender for a spot on Bachelor in Paradise.

More like this
Here’s Everyone Heading To The Beach On 'Bachelor In Paradise' Season 8
By Grace Wehniainen
Wait, Did Nate Actually Turn Down Being The Bachelor?
By Kadin Burnett
Are Brandon & Serene Still Together After 'Bachelor In Paradise'?
By Kadin Burnett
Here's What Happened After Rachel & Aven Left The 'After The Final Rose' Stage
By Grace Wehniainen
Get Even More From Bustle — Sign Up For The Newsletter