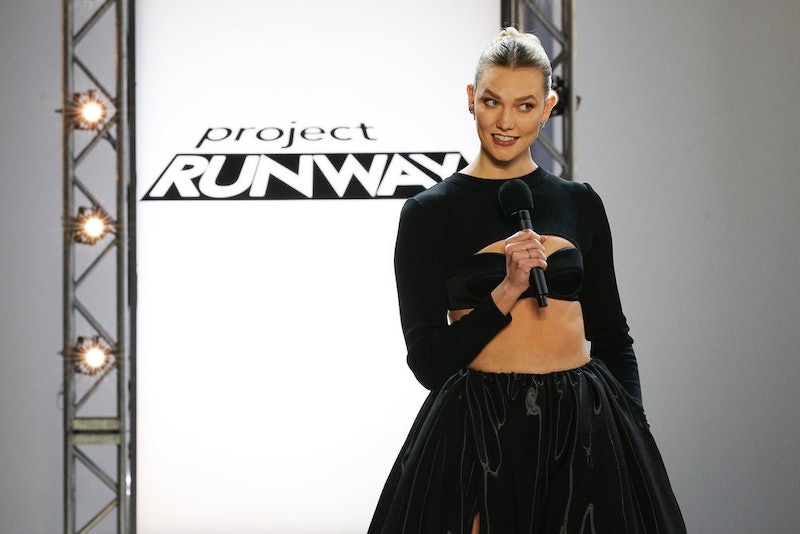 When casting for Project Runway Season 19 opened in February 2020, filming was set to start in June. But when the coronavirus pandemic hit in March, things were inevitably delayed. Now, production for Season 19 is set to begin this spring in New York City, assumedly in time to air later this year.

When the series returns, there will be at least one big change: Karlie Kloss will no longer serve as a full-time host. Instead, she’ll make guest “appearances” throughout the season. Bravo has not shared any details about who might fill in for Kloss going forward, though a source told Variety that the network will be “reimagining the host role.” Mentor Christian Siriano and judges Nina Garcia, Brandon Maxwell and Elaine Welteroth, on the other hand, will all be back.

The news comes after Kloss welcomed her first child with husband Jared Kushner in March. The two’s marriage led to a viral moment in Project Runway Season 18. During a challenge in which the designers were challenged to create a dress for Kloss to wear for an event, Maxwell told contestant Tyler Neasloney he couldn’t imagine Kloss wearing his design anywhere at all. Neasloney then retorted, “Not even to dinner with the Kushners?” The designer apologized to Kloss on camera shortly afterward, but later sold T-shirts emblazoned with the phrase, donating half of the proceeds from each shirt to the pro-LGBTQ+ NGO Ali Forney Center.

“I was honored to be one of the first memes of the decade,” Kloss said of the exchange on Watch What Happens Live with Andy Cohen. “But honestly the real tragedy of this whole thing is that no one is talking about how terrible that dress was. That’s why he went home. And no, I would not wear that dress to any kind of dinner.”

Regarding Kloss’ decision to take a step back from Project Runway, a source told People that she simply has "a lot on her plate.” "She's also got some incredible things cooking on the business and philanthropic fronts that she's really passionate about and pouring a lot of her time into right now," the source added. "I know she can't wait for the season and is excited to still be involved. She loves Christian, Elaine, Nina and Brandon so much."

No further details about Project Runway Season 19 have been announced, but if you’re itching for more fashion competition shows while you wait for new episodes, there are a few options. Netflix’s Next in Fashion, hosted by Alexa Chung and Queer Eye star Tan France, features designers from around the world competing for the chance to win $250,000 and debut a collection on luxury fashion retailer site Net-a-Porter. Former Project Runway judge Heidi Klum and mentor Tim Gunn also have their own series on Amazon: Making the Cut, on which a group of 12 designers compete in fashion challenges for a million dollars and the opportunity to design a line with Amazon Fashion.

More like this
Everything To Know About 'FBoy Island' Season 2
By Gretchen Smail and Radhika Menon
An 'Emily In Paris' Fave Is Joining Season 5 Of 'The Crown'
By Bustle Editors
Pete Davidson Pops Up In This Hidden Scene From The Kardashians Season Finale
By Jake Viswanath
'The Kardashians' Season 2: Will Pete, Tristan, Scott & Kanye Appear On The Show?
By Jake Viswanath
Get Even More From Bustle — Sign Up For The Newsletter

This article was originally published on March 12, 2020