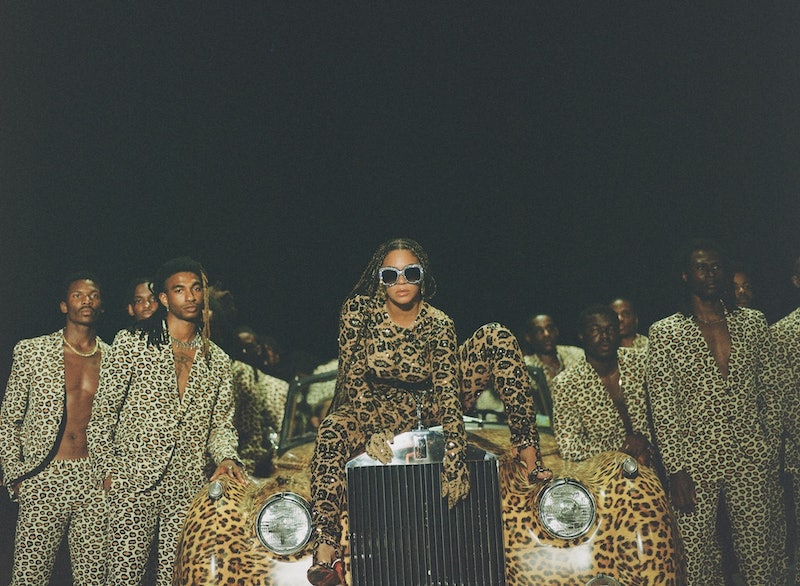 Beyoncé's Black is King is now streaming exclusively on Disney+. The visual album is an accompaniment to her soundtrack The Lion King: The Gift, which was released last year alongside the remake of The Lion King, in which Beyoncé voiced Nala. The new film "reimagines the lessons from Disney’s global phenomenon for today’s young kings and queens in search of their own crowns," Disney+ details. But not everyone has Disney+ just yet, so Beyoncé fans are wondering if and when they'll be able to catch the new art film on some other streaming service, or if it's available to rent. If you don't have Disney+ I bet you're asking yourself: when will Black is King be on iTunes?

Since Disney+ has the exclusive on streaming Black is King, it doesn't look like it's going to be available on iTunes any time soon. Like the Hamilton movie, Black is King is a much anticipated, highly sought after project that Disney managed to snap up for its barely one-year-old streaming service.

But don't fret just yet. You can still listen to The Lion King: The Gift on iTunes. The album itself is an accompaniment to the original music from The Lion King, with Beyoncé's added songs like "Spirit," “Already,” “Brown Skin Girl,” “Mood 4 Eva” and “My Power," which are also featured in the film.

The full song tracklist for The Lion King: The Gift is below, excluding the numerous Lion King-related interludes that appear on the album.

More like this
Here’s Everything Coming To & Leaving Netflix In February
By Jake Viswanath
Yes, You Can Stream ‘To Leslie’ In The UK Now
By Sam Ramsden
11 Movies To Watch At The 2023 Sundance Film Festival
By Chloe Foussianes
You’ll Definitely Recognise The Stars Of Amy Winehouse’s Biopic
By Maxine Harrison
Get Even More From Bustle — Sign Up For The Newsletter
From hair trends to relationship advice, our daily newsletter has everything you need to sound like a person who’s on TikTok, even if you aren’t.