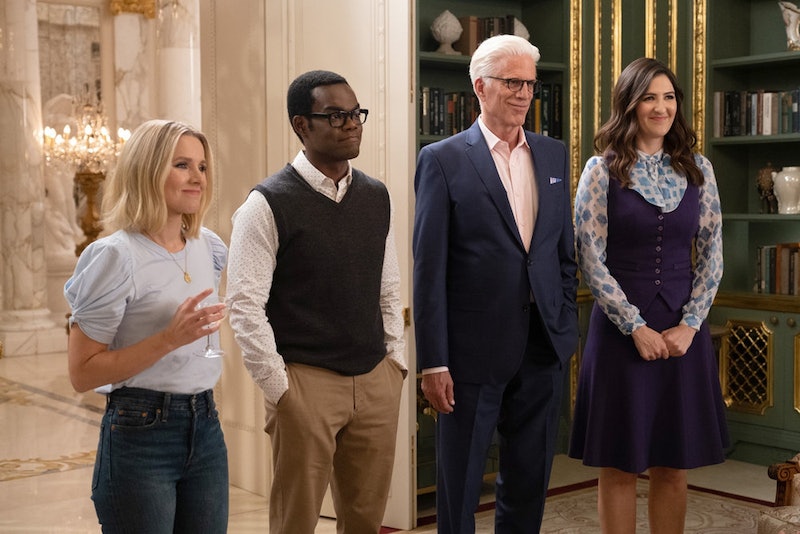 Regardless of who takes home the Best Person sash — or, rather, the trophy for Outstanding Comedy Series — at the 2020 Emmy Awards, at least we will soon be able to escape into The Good Place once more. Season 4 of The Good Place will arrive on Netflix in the United States on Sept. 26, which is the forking fantastic news that we all could use to help rescue us from the Bad Place that is 2020.

Because the series (appropriately) wrapped up back in January, fans have been waiting for the past nine months to rewatch Eleanor Shellstrop (Kristen Bell) complete her journey from Arizona dirtbag into a genuinely good person. Of course, there are plenty of other options for people who are hoping to take a crash course in ethics from Chidi (William Jackson Harper).

The Good Place Season 4 will hit Netflix less than a week after the 2020 Emmys, where the show is up for six awards, including Outstanding Comedy Series and Outstanding Writing for a Comedy Series. In addition, stars Ted Danson, D'Arcy Carden and Harper have all earned nods for their portrayals of Michael the Architect, "not a robot" Janet, and neurotic professor Chidi, respectively.

But regardless of how many awards the show wins, The Good Place will live on thanks to streaming services, in order to inspire everyone to try and be a little bit better. "I do hope that in the moment that we're connecting with people, we are opening up some kind of impulse to be better and to put good into the world in some way," Harper told TV Guide in September 2019 about what he hopes the show' legacy will be. "And if anyone watches this later on, many years down the line, I hope that it maintains that kernel of the mission."

Kristen Bell echoed those sentiments, saying that she hopes The Good Place "starts a conversation, an impulse" to be better. "The Emmy nominations are fine and great and wonderful, and it's so cool to be acknowledged by your peers," she continued. "But the reality of the satisfaction comes from [the fact that] we're trying to connect with people and we're trying to start this conversation about why it's important to try."