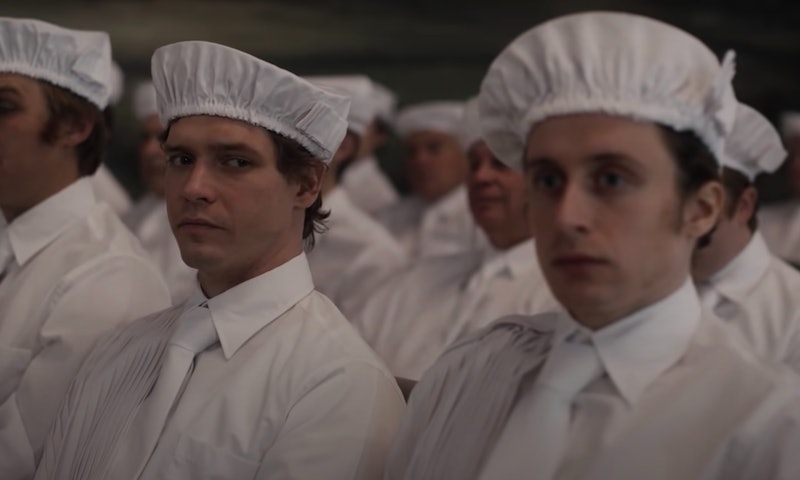 FX’s Under the Banner of Heaven tells the true story of the 1984 murder of Brenda Lafferty and her child in American Fork, Utah, at the hands of her brothers-in-law, Dan and Ron Lafferty. Based on the 2003 crime novel of the same name by Jon Krakauer, the series follows Andrew Garfield’s fictional detective Jeb Pyre as he slowly uncovers who killed Brenda, and what role Mormonism and the beliefs of founder Joseph Smith played in her death.

According to The Salt Lake Tribune, Dan and Ron Lafferty had violent and unorthodox religious views that they shared with their four other brothers. As Krakauer explained to public radio KUER, the Lafferty brothers were members of “The School of the Prophets,” a fundamentalist splinter sect that claimed their followers received revelations from God. Krakauer believed that Ron was driven to create the group by his own father, Watson Lafferty, who was a cruel and “severe disciplinarian” who beat his wife and children, and once killed the family dog after an argument. Watson was also a conspiracy theorist; he believed the Mormon church lost its way when it outlawed polygamy in 1890, and taught his sons to distrust the federal government and value male authoritarianism and the superiority of the white race.

Ron, Dan, and their youngest brother Allen soon came to share their father’s cruelty and messianic delusions. Per Deseret News, Dan refused to pay taxes or obey traffic laws, pronouncing that he was above the laws of man. In 1982, the church excommunicated him for trying to take his 14-year-old step-daughter as his second wife. Then Ron was excommunicated in 1983 for his increasingly extremist views.

Ron's wife refusing to practice polygamy further set him off, and he spent his days writing texts that he believed would one day be read as scripture. But when Ron’s wife divorced him in 1984 and took their six children with her to Florida, he became enraged. On top of that, Allen marrying BYU student Brenda Wright created even more tension in the family, as she clashed with the brothers and objected to Allen being in the School of the Prophets. Ron and Dan felt her stance interfered with a “divine plan” that required all six Lafferty brothers.

“She stood up to the Lafferty brothers. She fought back, and Ron resented this,” Krakauer said. “And so, coincidental or not — I don't think so — he had a revelation: God told him that Brenda needed to be removed along with her infant daughter.” Ron ended up telling his brothers that God said they had to kill four people, who were all directly related to his own personal grievances: Chloe Low, a member of the church who supported his wife during the divorce; Richard Stowe, who had presided over his excommunication; and Brenda Wright Lafferty and her child.

On the morning of July 24, 1984, Ron and Dan Lafferty forced their way into Brenda’s home and severely beat and strangled her before slitting her throat, according to court documents. Dan then slit the throat of Brenda’s 15-month-old daughter, claiming that God told him that she “would grow up to be just as despicable as her mother.”

Low wasn’t home when they broke into the house, and they missed the turnoff for Stowe’s home, so Ron and Dan then fled to Nevada. They were arrested in Reno, Nevada, on Aug. 17, 1984. In 1985, both men were convicted of murder, and Ron was sentenced to death. “I’m not ashamed about what happened,” Dan said on the stand, per The Salt Lake Tribune. “It was just a matter of business.”

Ron Lafferty died of natural causes at the Utah State Prison in Draper on Nov. 11, 2019, at 78 years old. Per his federal public defender, he wanted to die by firing squad, but was deemed mentally unfit to stand trial. “Mr. Lafferty believed his incarceration and conviction were the result of a conspiracy between the state, the church, and unseen spiritual forces, including the spirit of the trial judge’s deceased father, among others,” she told New York Times. “He believed that all of his attorneys were working against him, and that one attorney was his reincarnated sister, who later became possessed by an evil spirit.”

Today, Dan Lafferty is serving a life sentence without the possibility of parole at Utah State Prison.

More like this
What Makes A Sally Rooney Sex Scene So Hot?
By Samantha Leach
Conversations With Friends' Endometriosis Scenes Are As Brutal As It Gets
By Ivana Rihter
UK Viewers Will Have To Wait To See Jessica Biel’s Killer Housewife Series
By Rachel Mantock
Kendall Jenner Isn’t Ready To Have A Baby Amid Her Mom’s Wishes
By Jake Viswanath
Get Even More From Bustle — Sign Up For The Newsletter