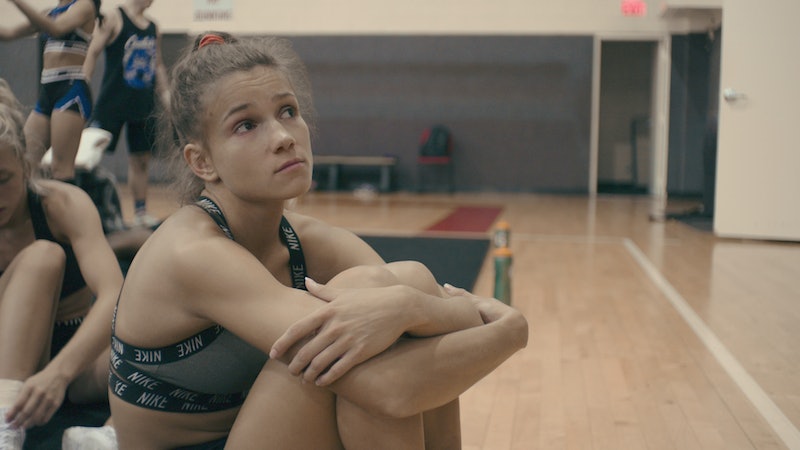 From the opening mat counts of Netflix hit series Cheer, it was obvious the steely, focused Morgan Simianer would emerge as a thick-skinned twist on America’s sweetheart. The first images of the Season 1 premiere episode are of Simianer — all 96 pounds and two feet of swinging ponytail — flipping through the air and landing with a slapping thud into a cradle of her Navarro College teammates’ arms. Her first utterance is an understated “ouch” as she massages her ribs. “Let’s just do it,” she says after breaking for only a few moments, preparing to hurtle toward the ceiling again, knowing the only way down is a painful clash of skin and bone.

As viewers learned over the docuseries’ inaugural six episodes, the junior college’s championship team has an oxymoronic sort of appeal: They’re a cheerleading hegemon composed of misfits. Simianer has one of the most quietly tragic stories among the main cast, left by her parents to raise herself in a trailer in Wyoming. Eventually, when her grandparents learned of the situation, Simianer moved to live with them on their Wyoming farm. She struggles with feelings of worthlessness and abandonment and low self-belief that follow her onto the mat. Throughout Season 1, however, Simianer proves herself to head coach Monica Aldama, whom Simianer calls a “second mom.”

Since the show aired, she returned to cheer with the Bulldogs for another year and has launched into full-blown stardom, complete with a million-plus Instagram followers and beauty brand partnerships. Viewers will get to catch up with Simianer when Cheer Season 2 premieres Jan. 12 on Netflix, but in the meantime, here’s what she’s been up to since Season 1.

At the end of Season 1, Simianer revealed she’d be returning to Navarro for a third year — even though she’d already achieved her Associate’s Degree. In an interview with HuffPost published shortly after the series’ premiere, she detailed the decision. “I felt very comfortable here at Navarro. It’s one of the places I’ve lived in the longest, and it felt like this was home for me and this is where I’m supposed to be,” she explained. “I didn’t really know what college I wanted to go to, and I thought there were classes here at Navarro I could take and finish here and feel more comfortable.”

Simianer also recalled feeling as though there weren’t any other places for her to receive the same level of cheerleading experience: “I knew Monica would help me and there’s so many more things that I could learn from this program and grow from that would help me later on.”

After preparing to return to the National Cheerleading Championship in Daytona Beach, Florida, with the Bulldogs in April 2020, however, the COVID-19 pandemic soon arrived and canceled the coveted competition, cutting Simianer’s athletic career short. “Navarro College Cheer, You are my everything. My heart hurts that I won’t cheer again,” she wrote on Instagram in reaction. “I’m so thankful for the bonds I’ve created and the memories that I’ll carry with me forever. Thank you for shaping me into the person I am today. Thank you for providing a family for me and showing me all that this life has to offer. I’m going to miss everything about this. The program. The people. Everything.”

On the career front, it seems Simianer’s name carries new cache both inside and out of the insular world of competitive cheerleading. Shortly following the premiere of Cheer Season 1, she was among the featured cheerleaders at a Rebel-sponsored meet and greet in Indianapolis. There’s a video of her asking a crying boy — overwhelmed at meeting the Cheer cast — if she can give him a hug at the event. The intense fanfare inspired the athlete to start a Cameo page and accept business partnerships with brands including Buick, Pillsbury, Secret, and Fab Fit Fun. In addition, she’s partnered with Conair to launch a line of hair scrunchies under the beauty brand’s Scünci label, which can be purchased at CVS.

Amid the initial Cheer press tour, which included appearances on the Dallas radio show Kidd Kraddick, NBC morning news, and The Ellen DeGeneres Show, Simianer was in a relationship with minor league baseball player Brad Markey. The pair reportedly started dating in August 2018, per Elite Daily, and shared Instagram snaps from trips to Turkey, Greece, and New York City during their two-plus years together. While it’s unclear when the pair split, E! News reported that Simianer seemingly began dating Big Brother 21 winner Jackson Mitchie in December 2020. Their relationship lasted through February 2021, and according to Instagram, she’s been dating fellow Texas resident Stone Burleson since March. “Guys I did it,” she captioned a photo with Burleson in December 2021. “I found the person who makes me the happiest I’ve ever been.”

Simianer officially graduated from Navarro in May 2020 and soon relocated from Corsicana to Dallas, per People. In April 2021, she traveled to Daytona to watch the National Cheerleading Championships in person and cheer on her former team from the sidelines. Despite the new attention, the 24-year-old still seems very much like the cheerleader we saw on TV: a young woman who can’t believe her good luck despite how much bad luck she’s already had. After marathon-watching Season 1 herself — Simianer told a local ABC affiliate that she watched the series the night it came out from 2 a.m. to 8 a.m. — she took to Instagram to thank, well, everyone.

“I'm still in shock!!!!” she wrote. “Thank you for all the love and unconditional support. I couldn’t have made it this far without any of you. This experience has been amazing and I wouldn’t want to change it for the world. Also I want to apologize for not being able to read everyone's messages, but just know that you all mean so much to me. I love y'all.”