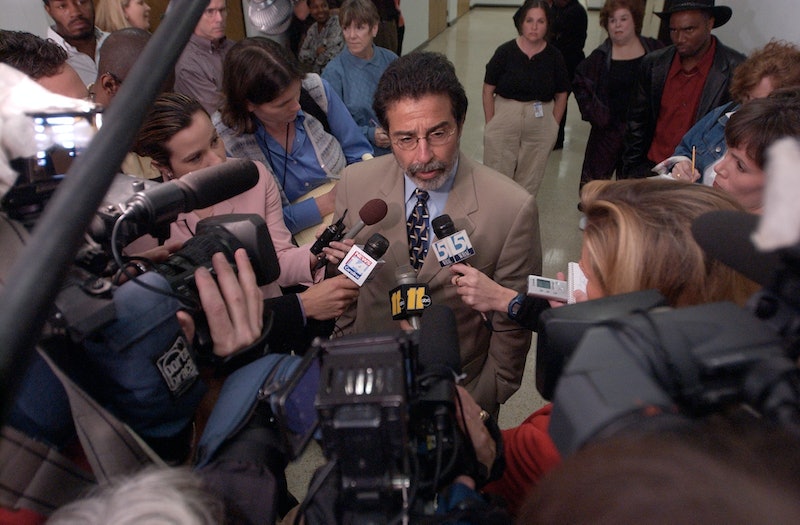 Attorney David Rudolf came to national prominence for defending Michael Peterson in his 2003 murder trial. The saga was chronicled in the docuseries The Staircase, which released its first episodes in 2004 and concluded in 2018. Now, with HBO Max is airing a fictionalized version of the original series — starring Colin Firth as Peterson, Toni Collette as his wife Kathleen, and Michael Stuhlbarg as Rudolf himself — the attorney is back in the spotlight. It’s fair for viewers to wonder if David Rudolf is still practicing law today, and, indeed, he is.

What Was David Rudolf’s Role In The Staircase?

When Peterson was accused of killing his wife Kathleen, who was found dead at the bottom of their home’s staircase, Rudolf was on his defense team. After a long trial, Peterson was convicted of first-degree murder in 2003 and was initially sentenced to life in prison without parole. But the case didn't end there. Years later, after a judge found that a blood analyst offered misleading testimony during the trial, Peterson was released and granted a new trial.

Following a second trial, which Rudolf also worked on, Peterson was eventually able to walk free in 2017. Peterson entered into a plea deal known as the "Alford plea," which acknowledged that the prosecution had enough evidence to convict him of manslaughter, but still allowed him to maintain his innocence. Because the sentence he faced was less than the eight years he'd already spent in jail, he was able to walk away without more prison time, according to the News & Observer.

Where Is David Rudolf Now?

Rudolf remains an attorney to this day. He and his wife Sonya Pfieffer run the Pfeiffer Rudolf law firm in North Carolina. The firm’s website states that the company specializes in criminal defense, complex civil litigation, appeals, college disciplinary proceedings, post-conviction challenges, and civil rights matters. According to their website, Rudolf was included in the list of Best Lawyers in America in 2018.

According to Rudolf’s personal website, he and Pfieffer also recently purchased the Elder Gallery of Contemporary Art in Charlotte, North Carolina. “We recognize that art can be an incredibly powerful way to address challenging issues and subjects in a non-threatening manner — as opposed to the adversarial setting we generally live in,” he writes.

In 2005, Rudolf told the Los Angeles Times that watching the docuseries was "a very, very emotionally wrenching and depressing experience. It put me right back in the middle of it, except that I knew that the outcome was going to be a disaster." In a 2016 News & Observer interview, he said that he suspected he might return to Peterson's case even after the years he had spent away from it. "I spent a good deal of my life on this case," he told the paper. "I’m very interested in it." He would, of course, return to represent Peterson in 2017, during his second trial. In the wake of that trial and the subsequent release of additional episodes of The Staircase, Rudolf wrote a series of blog posts on his website chronicling his experience of working on the case.

Earlier this year, Rudolf went a step beyond blog posts and published a book. In American Injustice: Inside Stories from the Underbelly of the Criminal Justice System, he focuses less on Peterson or The Staircase and more on the systemic failures of the American criminal justice system — specifically, wrongful convictions — and how police and prosecutorial misconduct and racism factor into those failures. “I’ve been in trials where prosecutors have challenged every Black juror for reasons that were obviously, patently, transparently racial,” he told The Guardian. “There’s been studies done of jury selection in North Carolina made it clear that prosecutors were knocking people off because they were Black, for no other reason. In that setting, it’s pretty overt.”

Back in 2005, Rudolf told the Los Angeles Times that Peterson’s trial was wearing heavily on him. "It made me so suspicious and untrusting of the system," he continued. I always felt like if I was able to just get in there and do what I needed to do, that logic and facts would prevail. I don't think that's what happened here." In the years that followed, he’s evidently put that experience to work challenging the system he once believed in.