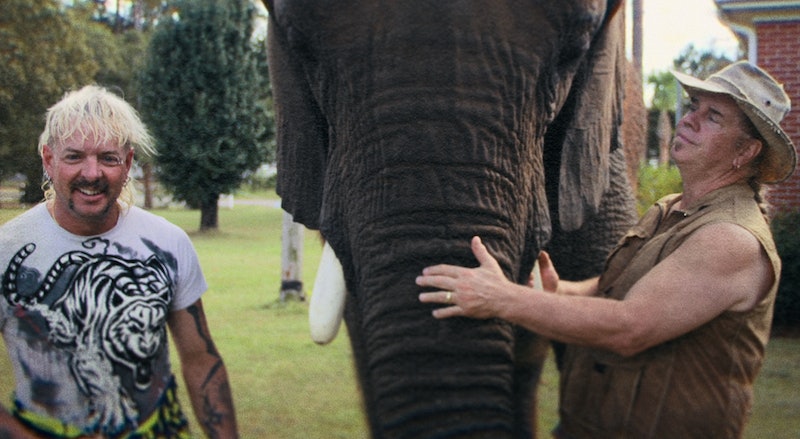 The saga of Tiger King continues, but this time the spotlight is on Bhagavan “Doc” Antle. Netflix’s new three-episode docuseries, Tiger King: The Doc Antle Story, delves into the exotic animal zoo owner’s “lifelong abuses of power,” likening him to a cult leader and alleging through numerous testimonies that he has a history of abusing and manipulating people — particularly young women. (Bustle reached out to Antle for comment on the series, but has not received a response).

The claims come on the heels of accusations of animal cruelty against Antle. In October 2020, he was indicted in Virginia on 15 charges of wildlife trafficking and animal cruelty following a months-long investigation into his dealings with private zoo owner Keith Wilson, who Antle sold lions to across state lines. Two of Antle’s daughters, Tawny Antle and Tilakam Watterson, were also indicted on misdemeanor counts of cruelty to animals. (Tawny was arrested again on Dec. 1, 2021 for the unlawful possession of a pistol, but was later released.)

To this day, Antle has maintained his innocence as well as the innocence of all of his family members in relation to the case. “I categorically deny any act or conduct that could ever be considered as ‘animal cruelty,’” Antle said in a statement, per The New York Times. “I have spent my entire professional life promoting the welfare and conservation of big cats and other species.”

Here’s everything else to know about Antle.

Antle founded The Institute for Greatly Endangered and Rare Species (T.I.G.E.R.S.), also known simply as Myrtle Beach Safari, in Myrtle Beach, South Carolina in 1983. In a 2020 interview with People, he described the 50-acre property as the “Ritz-Carlton of wildlife facilities."

In 2015, Antle told Rolling Stone that he breeds 10 to 15 new cubs every season to sustain operations, and that there are about 70 tigers on site that each eat $5,000 to $10,000 worth of food a year. The safari works in tandem with Antle’s Rare Species Fund (RSF), a grassroots organization that claims to work with state and federal authorities to develop conservation initiatives. Antle also claims that the RSF has contributed more than $1 million to wildlife initiatives.

But many have asserted that Myrtle Beach Safari and RSF don’t live up to their stated goals. Wildlife biologist Stephanie Schuttler claimed that Antle’s business is not a wildlife preserve but a zoo, as the term “wildlife preserve” can only refer to a national or state park, or an area that protects native flora and fauna — of which tigers are obviously not in South Carolina. Per Myrtle Beach Online, most of RSF’s money has been spent on “animal ambassadors” based within Myrtle Beach Safari — as in, it appears Antle is using money brought in through his nonprofit to fund his own zoo. Records show that Antle did donate to some conservation efforts overseas, but the amounts listed do not match up with what was reported in the nonprofit’s annual reports.

In November 2020, PETA filed a complaint to the U.S. Department of Agriculture. “Another captive tiger just tested positive for the novel coronavirus, but the recently indicted Doc Antle hasn’t let federal recommendations against cub-petting stop his search for a little limelight,” PETA said in a statement, per WBTW News 13. “Tigers and elephants used for photo ops are caged, chained, and beaten into submission.”

The Humane Society of the United States has also spoken out against Myrtle Beach Safari. “Antle’s tiger mill has been the source of immense cruelty to hundreds of tigers and must be shut down,” Kitty Block, the organization’s president and CEO, said in a statement, per The New York Times. “We know firsthand all about his treatment of animals.” The Humane Society also noted in 2015 that Antle often supplied cubs to other private zoos, and in reality was likely breeding as many as 50 tigers per season.

Doc Antle’s son, Kody Antle, was introduced in Tiger King. “[Kody] was raised here on the preserve, with tiger cubs and monkey cubs in his crib. So that’s a real-life Tarzan,” one of the guides at Myrtle Beach Safari told Rolling Stone in 2015. Kody was not indicted on charges of animal cruelty along with his sisters and father.

In Tiger King, Maria Tabraue suggested that Doc Antle has three wives: Rajnee, Moksha, and China, who Antle described as his “girls” on the show. They all live on the property with him, but Antle asserted that he’s not married to any of them. “When I say 'my girl,' it’s a cowboy saying, it’s not that these are my wives," he told Oxygen.com. "Sure I've had girlfriends and there’s girls I have had relationships with that have come and gone over the decades ... [but] I am absolutely not married nor have I been since my wife died over 20 years ago now. I’m not married and I certainly don’t have wives. I certainly am a single guy and I live in a house by myself."

When Rolling Stone visited in 2015, Antle more openly alluded to his relationships with the various young women under his employment. He called one of the staff members his “little Italian girlfriend,” and noted another staffer was “one of my lovely girlfriends for a long time.” As the series explores, Antle has a perturbing set of requirements to work at Myrtle Beach Safari, which has led to accusations of his zoo being a cult. Female recruits must be single and childless, and must be within 20 pounds of their “perfect athletic weight or working to get there.” In return, they live on the compound and get a small weekly stipend.

Several of Antle’s previous partners are featured in The Doc Antle Story, including Betsy “Brahmi” Rogers, his first wife, and Sumati Steinberg and Radha Hirsch, who both allege Antle began sexual relationships with them when they were as young as 14.

Antle has not addressed the show or the allegations, and you wouldn’t even know the series existed based on his Instagram. On Dec. 8, he simply posted a video of him smiling with Bubbles the elephant, encouraging people to visit Myrtle Beach Safari to meet “this wonderful girl that’s been hanging out with me for the past 38 years.”

Where Is Doc Antle Now?

Today, Doc Antle continues to run his zoo. His legal battle is ongoing, with his trial set to begin July 25, 2022.

More like this
Michael & Kathleen Peterson’s House From ‘The Staircase’ Has New Owners
By Kadin Burnett and Kayla Blanton
Where Michael Peterson From 'The Staircase' is Now
By Justice Namaste
Meet Michael Peterson’s First & Second Wife
By Morgan Leigh Davies
Where Is Dr. Cline Now?
By Morgan Leigh Davies
Get Even More From Bustle — Sign Up For The Newsletter