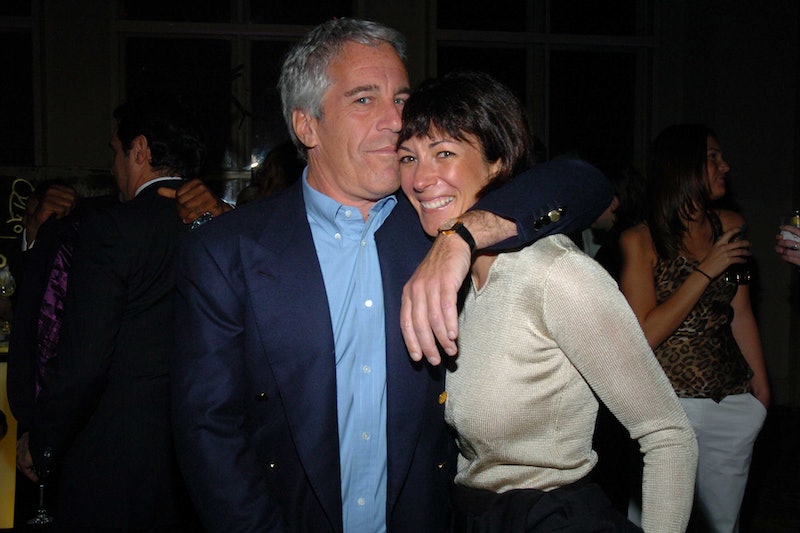 Since Jeffrey Epstein’s death in 2019, his longtime girlfriend, Ghislaine Maxwell, has continued to be the subject of public and legal scrutiny. There are more than half a dozen claims that she played a key part in the sex trafficking ring Epstein was accused of running and that she targeted, groomed, and even abused the young women herself. Maxwell has denied the allegations and vanished from the public eye for a long time following Epstein’s death. After she was arrested by the FBI in July 2020, she faced charges of enticement of minors, sex trafficking of children, and perjury. Here’s everything you need to know about the controversial British socialite.

Who Is Ghislaine Maxwell?

Maxwell was born in 1961 to Robert Maxwell, a newspaper tycoon who died in a mysterious yacht incident in 1991. After her father's death, Maxwell moved to New York City, where she met Epstein and introduced him to his network of high-profile connections, per CNN. The pair reportedly split in the 1990s, but court documents allege that during their relationship, Maxwell managed a network of recruiters and helped devise a playbook for how to target minors for Epstein to sexually abuse. Per The New York Times, recruiters were allegedly told to target young, financially desperate women and to promise to further their education and careers in exchange for paid massages that then turned sexual.

Epstein accuser Sarah Ransome claimed to the Times that Maxwell "orchestrated the whole thing for Jeffrey," and a source further alleged to Vanity Fair that Maxwell once described the victims as "nothing" and "trash."

As a result, Maxwell has been the subject of several civil lawsuits filed both before and after Epstein's 2019 death in prison. Virginia Guiffre filed a civil lawsuit against Maxwell in 2015, alleging that she and Epstein recruited her for their sex trafficking ring as a teen while she was working at Trump's Mar-a-Lago resort. Guiffre also sued Maxwell for slander after Maxwell reportedly called the claims "untrue" and "obvious lies." The lawsuit was settled in 2017.

In 2017, Ransome filed a suit that alleged Maxwell hired her to give Epstein massages and later coerced and threatened her into sexually pleasing Epstein. The suit was settled in 2018 under undisclosed terms.

On April 16, 2019, Maria Farmer alleged that she and her sister Annie were assaulted by both Epstein and Maxwell in separate locations in 1996. Annie formally sued Maxwell and Epstein's estate in November 2019, accusing them of rape and battery.

Both Araoz and Farmer's lawsuits are still ongoing, on top of several other "Jane Doe" cases. While Araoz's attorney was initially unable to locate Maxwell in January 2020 to serve her the complaint, the lawsuit was filed in a Manhattan Supreme Court in September 2020, per the New York Post.

In March 2020, Maxwell attempted to sue Epstein's estate herself, seeking reimbursement of her ongoing legal fees and personal security costs. It's still unclear what will become of Maxwell's numerous cases.

Maxwell’s trial attorneys from the Denver-based Haddon, Morgan and Foreman (HMF) law firm also sued her and several of her family members in August 2022 for nearly $900,000 in unpaid legal fees. Naming Maxwell, along with her brother Kevin and her estranged husband, Scott Borgerson, HMF also alleged that the family conspired to hide her true wealth.

Maxwell laid low following Epstein’s arrest and death, but William F. Sweeney Jr., the assistant director in charge of the FBI's New York Field Office, told NPR that they were always “discreetly keeping tabs on Maxwell’s whereabouts.” They knew she’d “slithered away to a gorgeous property in New Hampshire — continuing to live a life of privilege while her victims live with the trauma inflicted upon them years ago,” Sweeney said.

On July 2, 2020, Maxwell was arrested by the FBI in Bradford, New Hampshire. As prosecutors explained, she had been hiding out in a 156-acre property acquired in an all-cash purchase in December 2019 through a carefully anonymized LLC.

"Maxwell was among Epstein's closest associates and helped him exploit girls who were as young as 14 years old," Audrey Strauss, acting U.S. attorney for the Southern District of New York, said at a conference after Maxwell’s arrest. Maxwell was charged with transporting a minor for the purposes of criminal sexual activity, conspiring to entice minors to travel to engage in illegal sex acts, and perjury for denying allegations linking her to Epstein’s exploits during a 2016 sworn testimony.

Maxwell had been at the Metropolitan Detention Center in Brooklyn without bail since her July 2020 arrest. In June 2021, her lawyer claimed to The Guardian that she has been subjected to “raw sewage, water deprivation, and hyper-surveillance” by guards. Maxwell has requested bail four times, offering to renounce her citizenships in the United Kingdom and France, to be kept in place by armed guards, and to post $28.5 million in assets. But all of her requests have been rejected, most recently in April 2021.

On April 23, Maxwell faced her trial judge for the first time and pleaded not guilty to sex trafficking conspiracy and to an additional sex trafficking charge that was added in March 2021. (The new indictment included a fourth girl Maxwell is alleged to have groomed to have sex with Epstein. It also stretched the timespan of the charges from three years to a decade.)

On May 11, the judge announced that Maxwell’s trial will begin in November 2021, per Associated Press. Jury selection is currently underway, and opening statements will begin on Nov. 29. The trial is expected to last six weeks.

"I think my sister's probably relieved finally that [the trial] is starting because she's been in prison now for over 500 days in isolation, so this has to come to an end," Ghislaine’s brother Ian Maxwell told BBC Radio 4. However, he added that their family is worried the “negative media coverage” of Maxwell will “poison the jury pool” and that she will not get a fair hearing. He said that the family is lodging a complaint with the United Nations Working Group on Arbitrary Detention because “America needs to be held to account for the way it is choosing to discriminate against my sister.”

Maxwell, meanwhile, continued to maintain her innocence. “I have not committed any crime,” she announced during a pretrial conference.

Following a one-month trial, a jury found Maxwell guilty on Dec. 29, 2021, and the following June, United States Circuit Judge Alison J. Nathan sentenced her to 20 years in prison. “Today’s sentence holds Ghislaine Maxwell accountable for perpetrating heinous crimes against children. This sentence sends a strong message that no one is above the law, and it is never too late for justice,” Damian Williams, the United States Attorney for the Southern District of New York, said in a statement at the time. “We again express our gratitude to Epstein and Maxwell’s victims for their courage in coming forward, in testifying at trial, and in sharing their stories as part of today’s sentencing.”

In July 2022, authorities transferred Maxwell from Brooklyn’s Metropolitan Detention Center, where she’d been housed since her July 2020 arrest, to FCI Tallahassee, a low-security federal prison in Florida’s capital, according to the Associated Press.

Later the same month, Maxwell gave the first interview following her sentencing to journalist Daphne Barak for a Paramount+ special. Speaking from the Florida prison, she discussed topics ranging from her friendship with Prince Andrew to the conditions inside the prison and her overall regrets. “Meeting Epstein was the greatest mistake of my life,” she said, per CBS News.

This article was originally published on May 27, 2020