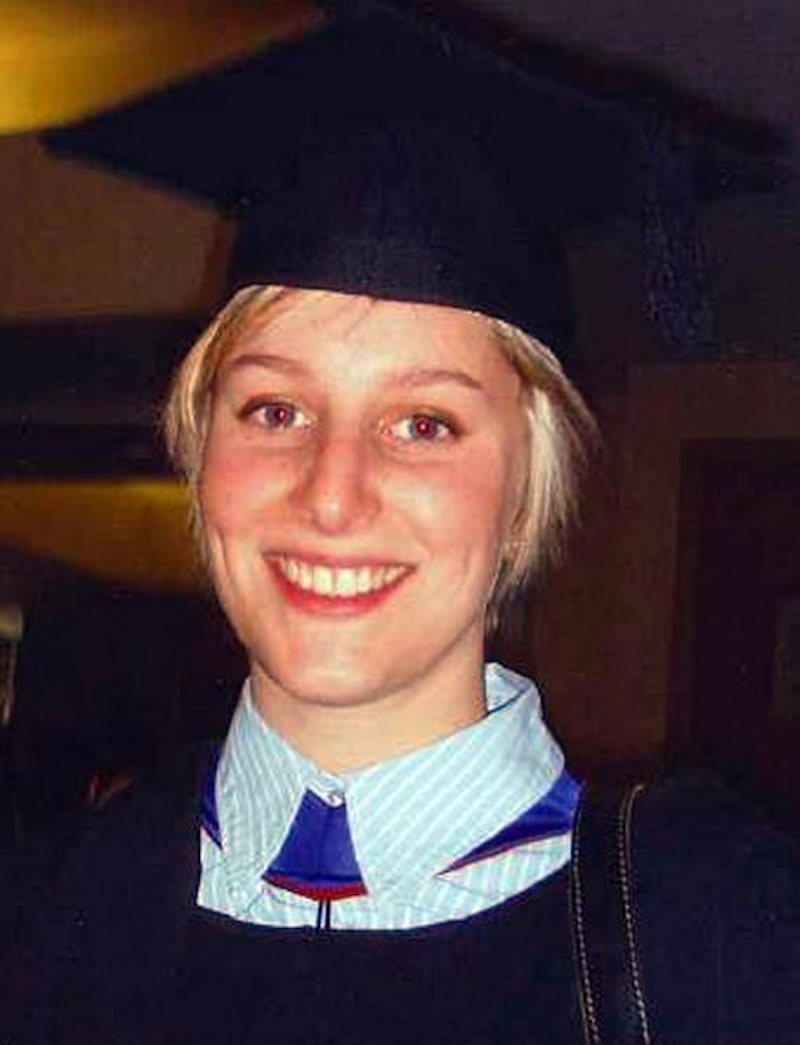 On Christmas Day 2010, the body of 25-year-old landscape architect Joanna Yeates was found in a snowbank by a couple walking their dogs in North Somerset. Her boyfriend had reported her missing in the early hours of Dec. 20, after returning from a weekend away and finding her bag, coat, and mobile phone in the flat they shared.

Following an investigation conducted by Avon and Somerset Police, Yeates’ neighbour 32-year-old Vincent Tabak was arrested and later convicted for her murder in October 2011. A new Channel 5 docuseries, Body in the Snow: The Murder of Joanna Yeates, will follow the investigation in detail, focusing on how Tabak was brought to justice. But where is Joanna Yeates’ killer now?

Tabak is currently serving a minimum sentence of 20 years for the murder of Yeates, which is being carried out at HM Prison Wakefield according to the Express.

In March 2015, Tabak was convicted further for possessing indecent images of children. As the Guardian reports, when Tabak was first arrested police found explicit videos and photos on his laptop which included 145 indecent images of children. Judge Neil Ford QC rejected an application to stop the charge made by Tabak’s defence team, who argued that he would not get a fair trial due to his notoriety and recent portrayal in the ITV drama The Lost Honour of Christopher Jefferies, which aired in 2014 and covered Yeates’ murder.

“I take the view that it will be possible for Mr Tabak to have a fair trial,” Ford QC concluded. Tabak entered a guilty plea and was sentenced to a further 10 months imprisonment, which was started immediately and ran concurrently to his initial sentence for Yeates’ murder. He has also been added to the UK’s Sex Offenders’ Register for 10 years, and will be banned from working with children or young people upon his release.

The Lost Honour of Christopher Jefferies focused on Yeates’ landlord, who lived in the same building. Prior to Tabak’s arrest, Jefferies was falsely accused of Yeates’ murder and arrested, leading to widespread vilification in the media. He was eventually ruled out as a suspect, and as per The Guardian, was awarded “substantial” libel damages from eight newspapers.

At the time of Tabak's secondary charge, Avon and Somerset police’s temporary assistant chief constable Julian Moss said that it was “crucial” that these charges were added to Tabak’s criminal record, “so the full nature of Tabak’s offending is on record.”

Moss continued, “Tabak is now a convicted sex offender and this means an extensive range of protective measures can now be put in place to manage his criminal behaviour and protect those at risk.”

The two-part documentary, Body in the Snow: The Murder of Joanna Yeates, will air on consecutive nights on Channel 5, with the first episode on at 9 p.m. on Wednesday Sept. 8 and the second episode airing at the same time on Thursday Sept. 9. You can also stream the show afterwards on My5.

More like this
Wait, Is Maya Jama Confirmed To Host 'Love Island'?
By Sophie McEvoy
A Former 'Strictly Come Dancing' Pro Permanently Joins 'It Takes Two' Spin-Off
By El Hunt and Sam Ramsden
'Line Of Duty' Fans Might Recognise These 'Bloodlands' S2 Filming Locations
By Sophie McEvoy
After The Bling Ring, Nick Prugo Was Embroiled In Another Scandal
By Arya Roshanian
Get The Very Best Of Bustle/UK