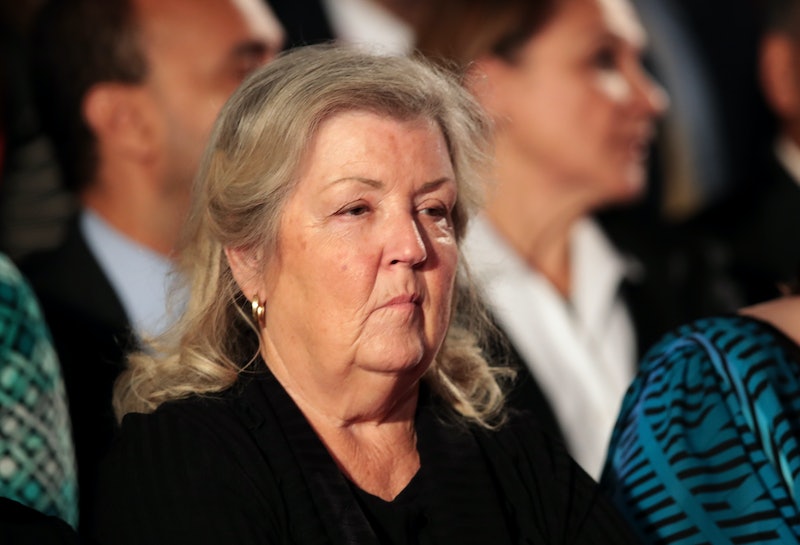 Two weeks after the Senate acquitted President Bill Clinton in his 1999 impeachment trial, Juanita Broaddrick appeared on NBC’s Dateline with new bombshell allegations. In her interview, Broaddrick accused Clinton of raping her during his 1978 campaign for Arkansas governor while he serving as the state’s attorney general. (Clinton’s attorney David E. Kendall called Broaddrick’s accusations “absolutely false” in a statement at the time, and the former President has never admitted any wrongdoing.) FX’s Impeachment: American Crime Story revisits Broaddrick’s story.

Broaddrick said on Dateline that she met Clinton during a campaign stop at a nursing home she operated at the time. Broaddrick recalled telling Clinton that she’d recently started volunteering at his campaign’s office in her hometown of Van Buren, Arkansas, and he invited her to call his office if she was ever in Little Rock. Weeks later, Broaddrick was in town for a business seminar and took him up on the offer. She initially agreed to meet Clinton at her hotel’s coffee shop, but she said he called at the last minute and asked to meet in her room instead to avoid the reporters who were camped out in the lobby.

Broaddrick alleged to Dateline that within minutes of entering the room, Clinton started kissing her. “I first pushed him away. I just told him ‘no’ ... He tries to kiss me again,” she claimed, per the Washington Post. “He starts biting on my lip... And then he forced me down on the bed. I just was very frightened. I tried to get away from him... He wouldn't listen to me.” Broaddrick claimed that despite her resistance, Clinton assaulted her, allegedly leaving her lip bruised and swollen.

“The last thing he said to me was, ‘You better get some ice for that,’” Broaddrick — frustrated by NBC’s weeks-long delay in airing her story for what the network cited as fact-checking purposes — claimed in a competing 1999 Washington Post interview. “And he put on his sunglasses and walked out the door.” (She also detailed the alleged sexual assault in the The Wall Street Journal and the The New York Times while she awaited NBC’s broadcast.)

Broaddrick said she initially didn’t come forward because she was afraid nobody would believe her, but Paula Jones’ 1994 sexual harassment lawsuit against Clinton eventually pushed her to share her story. When Jones’ lawyers first approached her, Broaddrick— who was referred to as “Jane Doe No. 5” — refused to cooperate. After she received a subpoena, she signed an affidavit in 1998 denying that Clinton assaulted her, which had been rumored since the early ‘90s.

“During the 1992 Presidential campaign there were unfounded rumors and stories circulated that Mr. Clinton had made unwelcome sexual advances toward me in the late ‘70s,” Broaddrick wrote. “I repeatedly denied the allegations and requested that my family's privacy be respected. These allegations are untrue and I had hoped that they would no longer haunt me, or cause further disruption to my family. ... I do not have any information to offer regarding a nonconsensual or unwelcome sexual advance by Mr. Clinton.”

Broaddrick later recanted her sworn testimony and claimed that Hillary Clinton tried to thank her for her silence at an early ‘90s political rally. The FBI investigated Broaddrick’s claims during Kenneth Starr's investigation into Clinton, but ultimately found the evidence “inconclusive.” In a 2016 BuzzFeed interview, Broaddrick expressed her desire for the public to believe her accusations. “People saying that they’re sorry is very respectful,” she said. “But when somebody says, ‘I believe you,’ that probably does me the most good, because I want to be believed. It’s a hard thing to come forward and talk about. And for somebody to choose to make me valid…that’s nice.”

Broaddrick doubled down on her allegations against Clinton on Twitter in January 2016, writing, “I was 35 years old when Bill Clinton, Ark. Attorney General raped me and Hillary tried to silence me. I am now 73....it never goes away.”

That was but a small part of the campaign she launched against Hillary Clinton during the former First Lady’s 2016 presidential bid. Hours before an October 2016 debate, Broaddrick appeared alongside Donald Trump as well as Kathleen Willey, Kathy Shelton, and Jones — all of whom have accused the Clintons of wrongdoing over the years — in a live Facebook press conference. During the event, Broaddrick attempted to draw a distinction between the accusations against Trump and those she’d made against Mr. Clinton. “Bill Clinton raped me, and Hillary Clinton threatened me,” she said. “I don't think there's any comparison.”

In 2018, Broaddrick released a book, You'd Better Put Some Ice On That: How I Survived Being Raped by Bill Clinton, with former investigative journalist Nick Lulli. According the the synopsis, she tells her story “from the assault at the hands of the future president, to the veiled threats by a seemingly complicit presidential wannabe Hillary Rodham Clinton.”

Now that the former registered nurse has retired to a mansion on a 23-acre Arkansas ranch near the Oklahoma border, Twitter seems to be her preferred mode of speaking out against the Clintons, as well as President Joe Biden and his current administration. Her Twitter bio repeats the false claim that Trump won the 2020 election, and she recently tweeted about her opposition to critical race theory and vaccine mandates, calling Dr. Anthony Fauci a “disgusting little tyrant” who “should be locked up for crimes against humanity.” She also posted racist tweets about Vice President Kamala Harris and opined that whoever recently vandalized a statue of George Floyd in New York City should be awarded a medal.

Broaddrick has even tweeted about Impeachment, promising to share more information in the future. “The real ‘American Crime Story’ of Impeachment was hidden and concealed during the Impeachment of Bill Clinton,” Broaddrick tweeted on Oct. 2. “‘Jane Doe #5’ is no Bill & Monica consensual affair. It’s ‘When Bill Raped Juanita.’ Stay tuned. More to come. #IAmJaneDoeNo5.”

More like this
Eurovision Has Been Given A Whole New Look Ahead Of Its Liverpool Debut
By Bustle UK
'The Catch' Revisits A Famed Irish Filming Spot From 'The Tudors'
By Darshita Goyal
Grammys Host Trevor Noah Made Adele's Dream Of Meeting The Rock Come True
By Brad Witter
Pedro Pascal Barely Got Through The "Lisa From Temecula" 'SNL' Sketch
By Stephanie Topacio Long
Get Even More From Bustle — Sign Up For The Newsletter
From hair trends to relationship advice, our daily newsletter has everything you need to sound like a person who’s on TikTok, even if you aren’t.